Voices from Two Rivers: Harnessing the Power of the Peace and Columbia 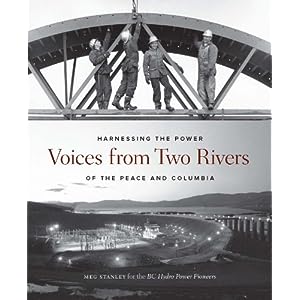 Voices from Two Rivers explores WAC Bennett’s “Two Rivers” policy of hydroelectric development on the Peace and Columbia rivers from 1962 to 1985. Clearly written and based on extensive research into academic and archival sources, this book is divided into two sections, one on each river system, in which chapters focus on the history of the rivers before dam construction, visions of power, remaking the rivers, camp and community, and impacts on local residents and environments. Integrating an impressive 140 oral history interviews with engineers, builders, First Nations elders, farmers, and others makes this a compassionate and intimate study of the human experience of the dams, one that is richly illustrated with photographs of people, landscapes, rivers, and construction sites. Voices from Two Rivers will appeal not only to those directly or indirectly affected by the projects, but also to readers interested in the history of the postwar labour experience and hydroelectric mega-project construction. Stanley’s goal is not to “present the Two Rivers policy as good or bad,” but “to draw out the voices and acknowledge the various ways in which the Two Rivers policy was understood and experienced” (5).

Stanley provides a detailed examination of the planning, engineering, technology, and labour involved in choosing dam sites, moving earth, clearing reservoirs, excavating and assembling underground generating stations, and building transmission lines. The large workforce created communities that flourished temporarily – such as Mica Creek with its popular ski hill, swim club, and ice sculpting contest. One might expect from a study sponsored by BC Hydro and written for the BC Hydro Power Pioneers that information on negative aspects of dam construction would be minimal. Instead, this book offers a more balanced perspective by paying attention to the individuals and ways of life that were displaced in the process. The last chapter in each section explores how long-term residents dealt with the loss of homes and familiar landscapes, and how they preserved what was important to them.

Hydroelectric mega-projects change ecosystems upstream and downstream. As Stanley shows, the Peace River dams led to dust storms and a decline of wildlife at Williston Lake, and contributed to a drying trend downstream in the Peace-Athabasca Delta. Opposition to damming for environmental reasons was minimal at first, but gained momentum in the 1970s and 1980s. I would be interested to hear more from the voices that questioned the necessity of the dams, and why they did so. In relation to the Columbia River dams, Stanley raises two issues that could be discussed in further detail: arguments presented to the water comptroller not to flood the Arrow Lakes in 1961 (230), and in 1976, opposition to the Revelstoke Dam by the BC Wildlife Federation and other organizations (244).

To tell the story of dam construction and power generation on the Peace and Columbia rivers is a giant project. Meg Stanley has succeeded in this endeavour by presenting a narrative that captures the nuances of political, cultural, technological, and social history. This polished and engaging study will provide historians and the general public with a solid understanding of the peak period of dam construction in the province, the communities that came into being with these projects, landscapes that were lost, and older societies that were resettled.