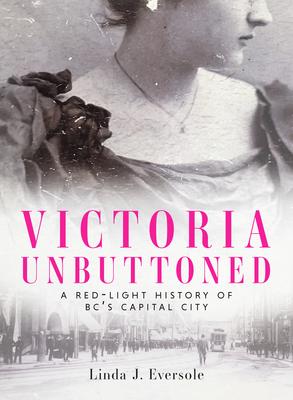 Linda J. Eversole’s first book, Stella: Unrepentant Madam, written in 2005, was praised for its academic value and readability. The author continues her exploration of women in the sex trade with Victoria Unbuttoned, profiling ten white women residing in the city from its earliest days to the First World War. A long-time Victoria resident, Eversole’s knowledge of the local history is enhanced by her work in research, heritage preservation and museums for more than four decades. She explains the reason for her biographical approach in the book’s Introduction: “To understand the business of prostitution, it is necessary to explore the lives of those who practised it and to examine their relationship to the wider community around them” (14).

Women of diverse ethnicities are not among the ten profiles, the author pointing to a lack of primary sources and her lack of cultural understanding. She invites others to build on her research however and ensures Victoria’s racially diverse population is depicted as part of the historical context to the women’s stories. Fort Victoria, founded in 1843, is shown as a place of pervasive racism, with a largely male workforce. Dancehalls and “disorderly houses” offered various forms of entertainment for the men, with newspapers reporting incidents involving ‘half-breeds’ and ‘Indians,’ as Aboriginal and mixed race men and women were called, as well as Kanakas, a descriptor for labourers originally from Hawaii. By the time BC joined Confederation, Chinatown was well-established, prostitution operating within its segregated community.

Nettie Sager, the first of the ten women chronicled, arrived at Victoria in 1862 with a theatre troupe. Her biographical sketch, and the others which follow, relies heavily on police and court documents, newspaper accounts, genealogical databases and coroner’s reports. Most of these women traveled to Victoria from the United States, many having worked in the brothels of San Francisco. Other common threads among the women are the continual movement from residence to residence and the use of false names and occupations. They coped with an assortment of challenges, such as mental illness, drug and alcohol addiction and male violence, their lives cut short as a result.

Illustrations throughout the book include fire maps indicating where brothel properties were located. A small number of photographs of the women profiled are also shown, and in a few cases, so are snapshots of their gravestones, taken by the author and located in Victoria’s Ross Bay Cemetery. Eversole was fortunate to garner information from descendants of four of the ten women portrayed.

Along with her dogged research, the author was watchful for the unexpected. Consider the fate of Dora Son, also know as Maud Lord. She came to the city from Vancouver by steamer in 1890 and was arrested two years later. Charged as a keeper of a brothel on Broughton Street, she was let off with a $50 fine and one day in jail. Lord was still living on Broughton Street when she died in 1898. “When a woman who was a resident of a brothel died, suicide was the initial assumption,” the author states (93). In Lord’s case however, the coroner gave the official cause of death as meningitis.

Christina Haas was among the few to live into her seventies. She ran a brothel on Broughton Street starting in 1912, earning enough to build her own home on Cook Street. During the war years, she was harassed, not only because of her work but for her German surname. Haas persevered, returning to California in 1919, where she died in 1938, aged 76. The author notes the similar life paths of Haas and Stella Carroll, the ‘unrepentant’ madam depicted in her previous book and appearing briefly in Victoria Unbuttoned.

A spotlight on two male leaders of the Moral Reform Movement provides more context for the women’s biographies, but equally instructive would have been the inclusion of middle- and working-class women’s attitudes about prostitution. Suffragists were especially well-organized during the war period and had much to say about women’s rights. Delving into the attitudes of working-class women performing female-designated jobs such as dressmakers, waitresses and retail clerks, could provide insights as well.

Society has ignored the past lives of same sex couples, transgender people and others who were considered outside the norm, the author observes, suggesting another marginalized group to be explored. Endnotes, an extensive bibliography which includes several academic and popular histories, and an index follow the narration.

Eversole challenges assumptions and employs a non-judgmental approach to her research, delivering a fresh perspective to biographies of white women prostitutes in early Victoria. Her work inspires further research and serves to broaden the reader’s understanding about a segment of women workers still living on society’s margins.