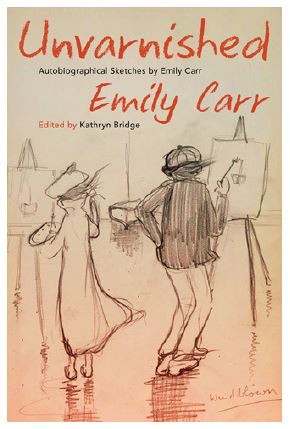 Just like painting and sketching, writing came as second nature to Emily Carr – a gifted and self-aware woman in more respects than one.  In 1895, at the age of twenty-three, she recorded a ten-mile bicycle trip from Duncan to Lake Cowichan in doggerel verse.  (This was accompanied by lightning pen and ink sketches.)  During her subsequent travels to England, Alaska, France, among other places, she not only produced doggerel verse and satirical sketches: she captured her experiences in short prose pieces.  With a view to honing her writing skills, Carr took writing courses.  She sought help from her ‘listening ladies’, Margaret Clay and Flora Hamilton Burns.  And when she thought her prose-pieces were publishable she submitted them – without success – to magazines like the Saturday Evening Post and Maclean’s Magazine.  But it was not until the late 1930s, after Carr met the CBC producer Ira Dilworth, that she acquired an editor who would help her become a published author.

‘Cut out what & where you think fit’, she told Dilworth in May 1942, ‘don’t feel you have to ask me first.’[1]  Acting on her advice, Dilworth helped Carr see three books through the press: Klee Wyck (1941), Book of Small (1942) and The House of All Sorts (1944).  A year after Carr’s death in 1945, Dilworth published her autobiography, Growing Pains, and seven years later, two further volumes: Pause: A Sketch Book and The Heart of a Peacock.  After his own death in 1962 his niece, Phylis Inglis, who became Carr’s literary executor – edited Carr’s journals, Hundreds and Thousands (1966).

There still remained in Carr’s literary archive over fifty autobiographical sketches and rough drafts of short stories.  When Dilworth became Carr’s literary executor, she advised him to ‘burn’ anything that he felt was ‘bad’ in the remaining manuscripts.[2] Though Dilworth might have considered these prose fragments best left in the bottom drawer, he did not consign them to the flames.  More than fifty years later, Kathryn Bridge has turned her editorial skills to this cache of Carr’s hitherto unpublished prose and the result is Unvarnished, Autobiographical Sketches by Emily Carr.

Bridge claims that the material in Unvarnished, paralleling the previously published writings, offers an insight into Carr’s ‘private world’.[3] Instead, I would propose that they do just the opposite.  For, like all of Carr’s hitherto published writings, they were surely intended for the outside world, be it for her listening ladies to whom she read her stories, or for prospective publishers. Thus, composed as part of what might be called Carr’s public writing, they naturally reinforce the persona that Carr deliberately created for herself – as poor, rejected, and generally hard-done-by.

Alternatively, an insight into Carr’s private world can best be found in source material that was not intended for publication.  For example, a single entry in her sister Lizzie Carr’s diary during her visit to England in 1901-1902 gives a quite different view of ‘Millie’ Carr’s sojourn in England than that displayed in her published writings, or in the fragments now presented to us in Unvarnished.   ‘Millie is looking very pretty with a Japanese comona [sic.] over her evening dress’, Lizzie wrote as her sister left for a fancy dress dance.[4]  Emily’s letter to a friend during her visit to England suggests that she was no ‘colonial’ stranger abroad: ‘Nell, isn’t it queer, here I am sitting down in London just as though I’d sat here all my life.’[5]  And here is a self-revealing entry from her private diary: ‘It must be my fault somewhere, this repelling of mankind and at the same time rebelling at having no one to shake hands with but myself  . . . .’[6]  Here are three of many examples, which can be found in her truly private writings, undercutting the Carr myth that she created for herself.

I am not, of course, suggesting that Carr’s hitherto unpublished writing should not be published now.  It goes without saying that Kathryn Bridge has done Carr scholars a great service by making these texts available.  But they should surely be seen in context, as representing the persona that Carr knowingly created of herself, and by herself: one that has reinforced the myth of her as lacking alike in social position, financial means or artistic recognition.  Carr does not need this misleading persona of the hard-done-by artist to sustain her reputation.  The best of her writings and her paintings stand by themselves and on their own considerable merits.