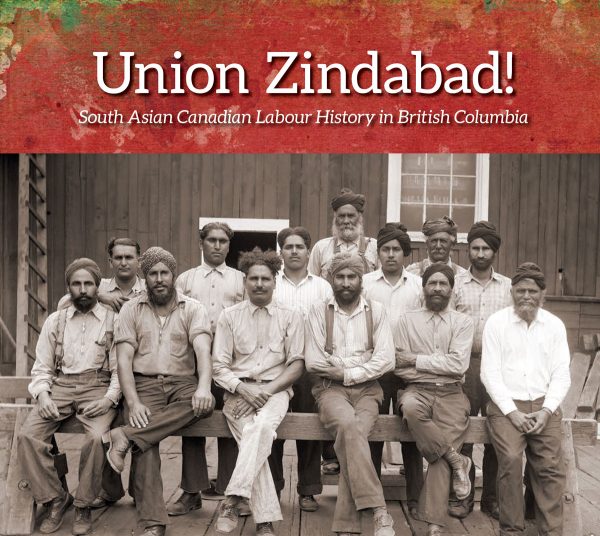 A book accompanying the exhibit of the same title (Union Zindabad!), Union Zindabad traces South Asian labor history in Canada through a variety of lenses. Beginning with the migrations of the early twentieth century, the book includes chapters on early migrants, revolutionaries, unions, and the struggles of South Asian labor activists and leaders. Written by Donna Sacuta and Bailey Garden of BC Labour Heritage and Dr. Anushay Malik, a labor historian of South Asia, the book reflects the research and expertise of a diversity of subfields and perspectives within labor history. A unique contribution to the history of Canada and the wider history of South Asian Diasporas, this book centers labor and political organizing in the history of South Asian presence in Canada.

After three opening chapters that recount well-known facts of South Asian presence in Canada, such as the Komagata Maru incident of 1914, chapters four through seven probe the trajectories of union membership and struggles against racism within unions and across the broader social landscape of BC. Noteworthy elements of this history feature the initial entry of South Asians into the international timber workers union in 1917 (chapter four) and the oft-overlooked role of women workers and activists (chapter six), emphasizing the imprint of revolutionaries and radicals in BC, ever since the rise of the Ghadar movement in the 1910s. Women such as Rattan Kaur Atwal, daughter-in-law of a famous Ghadarite, and Jinny Sims, activist and daughter of labor leader in England, offer snapshots into the world of women workers and leaders from within the community. Likely unknown to readers outside Canada, the book devotes chapter seven to the landmark Canadian Farmworkers Union, led in the 1980s by activist and labor leader Raj Chouhan. His historic meetings with Cesar Chavez comprise one of the many important aspects of this history that link with wider struggles across North America. As one of the few works in this field to span the entire twentieth century, this book includes a chapter titled “New Alliances,” which opens up inquiry into the changing political economy of the late twentieth century. From the 1980s, the decline of forestry and sawmills led to a rise in taxi work, entrepreneurship, longshore work, and entry into the trucking sector. Across the twentieth century, the book emphasizes the persistence of racism faced by South Asians but also the persistence of struggle, presence, and political engagement with the broader labor infrastructure and the politics of Canada.

Canadian readers have long waited for a fully annotated entry into a multi-faceted study of this topic, which links the history of Canada, the history of South Asia, and the global history of labor. Building on foundational works by scholars such as Hugh Johnston, the work brings the story to the late twentieth century and focuses on a range of individuals in the BC landscape, such as early twentieth century leaders Husain Rahim and Darshan Singh Sangha to more recent figures such as Raj Chouhan and Jinny Sims. Union Zindabad provides a sturdy foundation in the well-known histories of Panjabi migration and settlement, though the lives and histories of other South Asians, such as post-1947 Indian, Pakistani, and since 1971, Bangladeshi entrants, as well as twice and thrice migrants from other parts of the former British empire, such as eastern and southern Africa, awaits future study. For those interested in South Asian migration and diasporic history in other areas of the world, such as South Africa, the Caribbean, and the United States of America, Union Zindabad provides an exemplary model of history that emphasizes racism, struggle, and conflict without reifying difference or embracing assimilationist myths in place of history.[1]  Through its richly documented tour through South Asian labor history in BC, Union Zindabad displays how the historical journeys of South Asians in Canada sit alongside the struggles, hopes, and many efforts of a range of other social formations and communities in the modern world.

[1] For an overview of the field of South Asian migrations history, see Neilesh Bose, ed., South Asian Migrations in Global History: Labor, Law, and Wayward Lives (London, 2020). Comparable histories include Gaiutra Bahadur’s memoir/history Coolie Woman: An Odyssey of Indenture (Chicago, 2013) and Vivek Bald’s social history of Bengali migrants to the USA in Bengali Harlem and Lost Histories of South Asian America (Harvard, 2013). Goolam Vahed and Ashwin Desai’s study of late apartheid South African Indians in Colour, Class, and Community: The Natal Indian Congress, 1971 – 1994 (Wits, 2021) brings together labor history and political dynamics in a settler society that yield lessons for settler societies in the midst of transitions across the world.