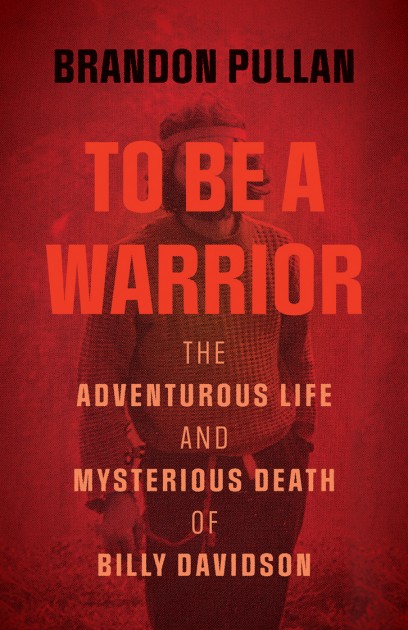 To Be a Warrior: The Adventurer Life and Mysterious Death of Billy Davidson

To Be A Warrior chronicles the life of wilderness adventurer Billy Davidson (1947-2003), a rock climbing mountaineer and ocean kayaker who spent the last thirty years of his life alone on various small islands in British Columbia’s Inside Passage.   He left behind an ex-partner, Lori Anderson and their son, Westerly, both interviewed for this book, along with other family members and friends. Excerpts from Davidson’s journals and letters are quoted throughout the text.  Also included are photographs, illustrated maps and colour-plated reproductions of his stylized oil landscapes.  The author, an outdoor journalist, does not provide footnotes or a bibliography, however he does offer a long-held passion for his subject, describing Davidson as enigmatic, legendary and a mentor.

The book opens with the discovery of Davidson’s body near his camp three months after his last journal entry on December 7, 2003.  Was his death by gunshot  a suicide or murder?  Speculation continues to this day.  The second chapter, equally riveting, documents Davidson’s upbringing.  At six years of age, Davidson and his siblings were placed by their mother at Wood’s Christian Home, an orphanage in Calgary.  Davidson left the orphanage in 1964 and finished high school while living with foster parents.  The author researches the institution, speaks to others who were placed there at the same time and speculates about how Davidson was shaped by the experience.

Davidson participated in hikes while at the Home and when he struck out on his own, pursued outdoor climbing, becoming an avid member of the Calgary Mountain Club. There were several trail-blazing climbs of Yamnuska by CMC members and in 1974, no one had climbed as high up Goat Buttress as Davidson who later wrote in a hut log book, “I felt what it was like to be a warrior, a person with oneself.  To be at one with your surroundings…” [132]

Davidson’s remarkable feats, friendships, brief family life and “survivalist” years along the Pacific coast are detailed in the ensuing chapters though few insights into his deepest thoughts and motivations are revealed.  Still, the author has succeeded in threading together a unique biography of a type of outsider rarely considered in social histories of the province.