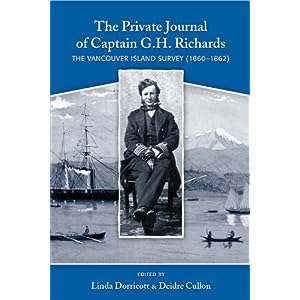 Captain (later Admiral Sir) George Henry Richards, Royal Navy, is one of the great personages of that unique era in modern history known as Pax Britannica – a period when “Britain Ruled the Waves,” and sometimes, as I have often said, “Waved the Rules.” During the long quietude between incarcerating Napoleon at St. Helena in 1815 and going to war against Imperial Germany in 1914, the peacetime missions of the Navy were extensive, indeed global. The life of Richards shows this global reach. Although he is better remembered in British Columbia, it should also be mentioned that he is well known as a naval figure in New Zealand, the Falkland Islands, waters near Montevideo, and in British hydrographic circles. Indeed, so capable was he as a hydrographic surveyor and commander of ships that he became Hydrographer of the Navy in 1864, the highest mark in his line of work. He was at the top of his profession.

He was an aquatic globetrotter. He had been to the Pacific in HMS Sulphur, taken an active share in the China war of 1839-42, and boosted his reputation as a seagoing fighter. He surveyed the southeast coast of South America, and was promoted to commander for gallantry in storming the forts in the River Parana. He surveyed in New Zealand waters during the Maori Wars, and then went to the high Arctic to search for Captain Sir John Franklin. He was a man of tremendous physical strength, and although he apparently suffered a hand injury, perhaps in the Parana affair, he made one of the most extraordinary sledging journeys on record, when searching for Franklin. But his monument lies in the waters and shores of British Columbia, where he directed the massive survey under tremendous pressure, with the aggressive Americans then searching out the gold fields of the Fraser and Cariboo, and the United States Army landing intemperately on the disputed San Juan Islands. As the book under review shows, he had an important role in the survey of Vancouver Island and coastal mainland British Columbia, particularly the former, and by the time his work was completed most of the major harbours and ports of Vancouver Island had been charted, and given the size of the Island and the difficulties of navigation the achievement was prodigious. Surveying was the harbinger of commerce, and at the time that Richards was in these waters the challenges to promote change were mighty, the colonies largely out of the mainstream of world commerce and affairs. It must be kept in mind that during these years the Hudson’s Bay Company was losing its monopolistic dominance, San Francisco and Sitka were the main ports of call in western North America, a canal across Panama Canal was only a dream and a Canadian transcontinental railway similar, and no docking facilities existed at the nascent naval base of Esquimalt. And if this were not enough, a great squabble had developed between the Colony of Vancouver Island and the Colony of British Columbia as to primacy in trade and commercial futures.

Richards arrived in HM steam sloop Plumper at Esquimalt 9 November 1857. That vessel proved too small and defective for this part of the world, and the paddle sloop Hecate was sent out to replace her, arriving 23 December 1860. Richards was here in charge on the survey until he sailed for home inHecate, leaving his understudy Master Daniel Pender in charge. At the close of Hecate’s commission, early in 1863, Pender was placed in command of the Beaver, hired from the HBC, and continued till 1870. Richards’ first duty was to complete the survey of the Strait of Juan de Fuca, and in reviewing the particulars of this recently I was again reminded of the heroic and important nature of that work. Richards headed up an important team of surveyors to complete this work, the details of which found their way into a chart of the strait and the early sailing directions. On his recommendation, two lighthouses were ordered to be erected on the British side of the strait, one at Race Rocks and the other, Fisgard, at the entrance to Esquimalt harbour. Richards had the pleasure of seeing these lights illuminated; they proved of inestimable value to navigation, as did their partners on the American shore. Richards, while here, was appointed a second commissioner to Captain James Prevost, the United Kingdom representative to fix, with the United States counterpart, the actual position of the 49th Parallel where it reached Pacific tidewater. Richards later placed a marker on Point Roberts for the same purpose.

The private journal here under review begins in February 1860 and recounts the various voyages and passages, particularly of the 1860 survey season. Among various places featured are Haro Strait, Burrard Inlet, Nanaimo, Johnstone Strait, Nootka, and others. Details of the 1861 and 1862 survey seasons continued, much like the former, though in different locales – pressing north to the new mission station of Metlakatla, for instance, and a revisit to Fort Rupert, Vancouver Island, then in sad decline. Social commentary about First Nations peppers the Richards narrative, though was not a preoccupation. His line of work was as a surveyor, and he keeps to his task. Mrs. Richards had joined him, courtesy of an agreement with the Admiralty, and their first son was named Vancouver, after the explorer (not the city, then unfounded). Mr. and Mrs. Daniel Pender’s first son, also born on Vancouver Island, they called Esquimalt. As for place names, Richards followed the injunction of Admiral Francis Beaufort, a former Hydrographer, that Native names were to be kept wherever possible and the application of politicians and statesmen was to be kept in line. But some places did not have Native names that could be called up, and accordingly we find Thormanby Islands, in Malaspina Strait, named after the racehorse who won the 1860 Derby; Merry Island, named for the racehorse’s owner, J.C. Merry; Buccaneer Bay named for a faltering contestant in the Derby; and Tattenham Ledge named for that well known turn in the course where horses who have gone thus far head round then down the straight for the winning post. These legacies come from the time when Richards was on survey. He encouraged the continuance of Spanish place names on this coast. When reading these journals we are reminded of the clear-headed nature of the commander, how he was able to direct a team of commissioned and non-commissioned subordinates, how he was a great leader of men, and how he was able to keep up morale, prevent desertion, and maintain strict discipline afloat and on shore.

Many of these details, and others besides, are given in this book, though the reader will be left to fill in many particulars and do some additional research to supplement the narrative and the sparse and sometimes incomplete footnotes. It is to be regretted that the editors are not more fully versed in the particulars of the colonial histories of Vancouver Island and British Columbia. Perhaps the greatest matter of omission is discussion of the “Report of Captain Richards on the Harbours of Vancouver’s Island and British Columbia, 23 October 1858.” Richards made this to Governor James Douglas, and the whole was reprinted, with supplementary correspondence, in the Parliamentary Papers, Part II for 1858 dealing with British Columbia (and Vancouver Island). Richards recommended that if Vancouver Island was not to be part of British Columbia then a site of a seaport for British Columbia could be just above Annacis Island, ten miles below Fort Langley on the Fraser River. This sparked a battle royal between Victoria and what became New Westminster as to primacy for commercial growth. This can be found in the press and Colonial Office records. New Westminster Municipal Council thanked Richard for bringing the 900 ton Hecate to the wharves, thus dispelling arguments from Victoria that the Fraser was unnavigable. But Richards kept private his own views, as this entry for 1 November 1862 reveals: “The Town of NWr has increased somewhat, but there are not the same unerring signs of prosperity as at Victoria. A miserable contracted jealous feeling pervades all classes, military included, and a wretched kind of repining that they cannot alter their geographical position, a desire to quarrel with everyone who comes from Victoria, or says a word in its favour.” The contrast between the two places was great, he observed, and he noted that the miners coming south for the winter got on to the first ferry bound for Victoria. He added wryly, “The misfortune of New Westminster is that Vancouver Id with its beautiful harbours and pleasant resting places exists.” (p.226)

In later years, Richards became a pillar of the scientific world, a Fellow of the Royal Society, and a Fellow of the Royal Geographical Society. Like many a great hydrographer he later went into the private world of commerce, in his case helping lay down submarine cables across the North Atlantic. In his time, he sailed the seven seas, knew all about triangulation, lunars, chronometers and how to regulate them, the drawing of draft plans, and the engraving of charts, and how knowledge was best disseminated in the Victorian world. He had the capacity, too, to keep his political superiors on their toes and to be careful what they said about the workaday world of plumbing the depths of the oceans and shoals and of finding reefs and rocks that posed hazards to shipping. The account he gives of how the Plumper ended up on the south side of the Strait of Juan de Fuca rather than on the north shore, where Richards thought he was, is a testament to the fact that these were (and are) dangerous waters, with tricky tides and currents, prone to storms and blanketing fog. As Richards was reminded, he inhabited the natural world, with all its wonders, surprises, and difficulties. Such is the life of the mariner.

This printing of the Richard journal of the early years of the 1860s, though by no means the complete story of Richards on the Northwest Coast, is welcome. In a footnote the editors point out that Phillip and Helen Akrigg knew of the existence of this journal in private hands in England. I made several requests to them in attempts to run down all important and relevant documentation in the course of my research for Gunboat Frontier: British Maritime Authority and Northwest Coast Indians, 1846-1890 (UBC Press 1984). I had thought naively that scholars would share their findings. I was to be sadly disappointed. This experience was the only case of keep-away that I have ever experienced as an historian; I expect I am not alone. In the circumstances, I was obliged to devote more time to reading the in-letters of Richards to the Admiralty and the Hydrographer, as well as to James Douglas; and on reflection I am assured that the external views Richards expressed are the more important and the more valuable to telling the story, particularly on such subjects as Indian policy, commercial development, and making navigation safer by the preparation of charts and Sailing Directions. A person of great humanity, Richards knew both sides of the Pax Britannica – how to be tough and yet how to extend responsibilities of trusteeship to First Nations. The belligerent and the humanitarian went hand in hand, and we come away from reading his pages thinking that he has given us a window on a world perhaps now lost but one in which the features are discernable and the problems not so different as in yesteryear. And every mariner, every yachtsman, owes a debt to George Henry Richards.