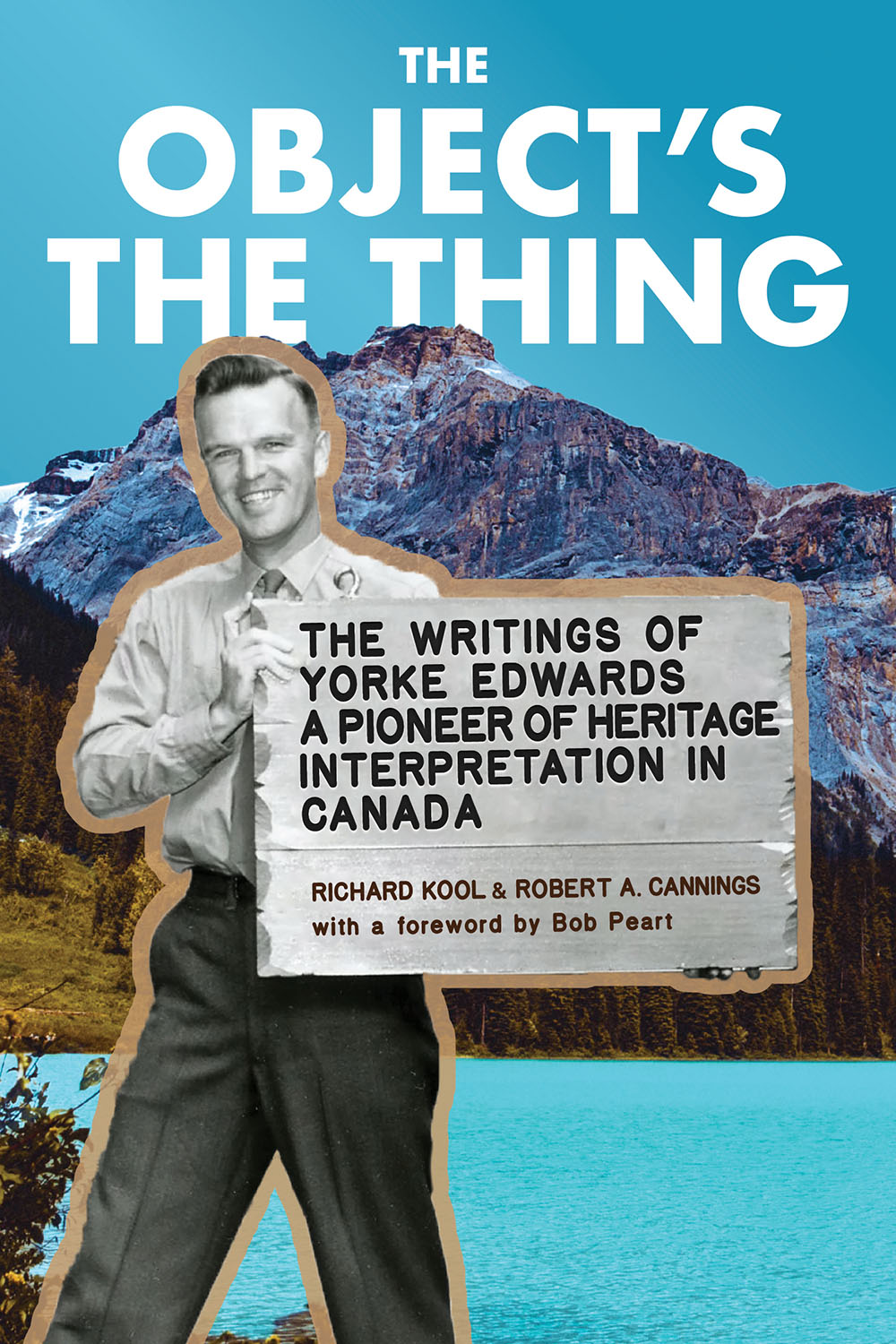 The Object’s the Thing: The Writings of Yorke Edwards, a Pioneer of Heritage Interpretation in Canada

By Richard Kool (editor) and Robert A. Cannings (editor)

When we visit a nature park or a museum, do we consider how interpretation contributed to our experience? For Yorke Edwards, “the father of nature interpretation in Canada,” interpreting the object is “the thing.” As Richard Kool notes, Edwards “helped to create a movement, and then a profession [of naturalist], meant to help others fall in love with things, be they organisms, landscapes, histories or peoples” (26). Edwards is important for British Columbia because much of his creativity was expressed in provincial parks and, later, at the Provincial Museum.

Robert Cannings’ lively biography introduces Edwards, his career, and twenty-seven examples of his writings on heritage conservation, the volume’s core. When Edwards published his first ornithological paper at age sixteen, he was already a keen birdwatcher. His enthusiasm for natural history was nurtured by visits to the Royal Ontario Museum in his hometown of Toronto and membership in its Intermediate Naturalists organization. His path later crossed that of two fellow members, Robert Bateman and Bristol Foster. After receiving a degree in Forestry from the University of Toronto, Edwards did graduate studies in Zoology at the University of British Columbia under the direction of Ian McTaggart Cowan. A summer job making a biological survey of Manning Park, which straddles the then new Hope-Princeton Highway, gave him ideas about interpretation. After graduation, he joined the Parks Division of the B.C. Forest Service. In 1957, with a small budget he hired a student as a park naturalist and, in an old tent, erected a Nature House in Manning Park. Following this successful experiment, over the next few years the Parks Service funded the construction of a permanent building, more signage, nature trails and the hiring of naturalists there and at several other sites, including Miracle Beach on Vancouver Island. Cannings rightly regrets the budget cuts and departmental re-organizations of the mid-1970s that ended the “halcyon days” of interpretation in B.C. parks (12) and the conversion of the “permanent” Nature House at Manning Park to a pub, although Edwards took consolation in the fact that beer is biological.

Before that happened, the Parks Branch briefly loaned Edwards to the Provincial Museum to assist in planning permanent exhibits for its new building. He already had a national reputation as an interpreter of natural history. A federal agency, the Canadian Wildlife Service, lured him to Ottawa where, for five years, he organized a proposed national program for wildlife centres. Under his direction, one, the Wye Marsh site at Midland, Ontario came to fruition. It had a B.C. connection. Edwards employed Jean André, of Provincial Museum fame, and Ted Underhill, a former naturalist at Manning Park, to produce exhibits and hired Bill Barkley, another former park naturalist, to manage it. In 1972, Edwards returned to Victoria as assistant director of the Provincial Museum, which was still developing its permanent exhibits. In 1975 he became its director and, in turn, was succeeded by Barkley. Edwards wrote over 400 papers and presentations. Many were purely scientific, but he was an eloquent philosopher with a sense of humour and a practical advocate of interpretation.

What is interpretation according to Edwards? In its simplest terms, he suggests that nature interpretation is: “opening the eyes of people,” sharpening their noses, tuning their ears and sensitizing their touch (125). In addition, it entertains them, introduces them “to new understanding,” and inspires “them to go beyond the introduction on their own into what might be called education” (147). “Words,” he asserts, “can be interpretive,” but interpretation involves “things that you can see or smell or feel or operate” and that distinguishes interpretation from information. (192) In short, the object is the thing.

Interpretation relies on interpreters — in most cases cited, these are park naturalists. Many papers and scripts were lectures to aspiring and practising park naturalists. In addition to having accurate local knowledge supported by research, Edwards insists that they must present it enthusiastically and in a non-technical manner. One of his best naturalists was Freeman King, “a kindly grandfather,” “who never lost the zest and wonder of his own childhood” and had “a constant store of happy nonsense to instinctively relate things to people and to their lives at home”(247).

In many ways, the book is an introduction to museology and draws on actual experience, both successes and some failures. Given Edwards’ career, the collection is stronger on natural than human history, but, as he argues, “man is surely natural” (154) and “the important history is really historical human ecology” (176). Moreover, many principles of interpretation apply to both, although it is easier to interpret in a natural park than in a museum where the object “is, in a sense, incarcerated.” He suggests compensating by such means as setting objects in dioramas and saying “something revealing” about them (270-71). Museum docents and tourist guides would benefit from reading his advice to interpreters.

In one section, the editors cleverly juxtapose typewritten extracts from Edwards’ annual reports to the Park Branch with related essays. They include an account of what might have been, illustrated with sketches by park naturalist, Raymond Barnes. Had Edwards been able to implement his dreams, there would be nature centres throughout the province featuring local resources or needs such as a Cowboy Museum for the Cariboo and a Fraser Valley farm for urban children.

Adding to the value of the book are the editors’ explanatory annotations, well-chosen photographs, and a bibliography of Edwards’ writings on Interpretation. Although we can not enjoy all the nature centres that Edwards envisioned, knowing the principles of interpretation allows an appreciation of the thought and research that lie behind successful presentations of natural and human history in the parks and museums we do have.

Kool, Richard, and Robert A. Cannings, eds. The Object’s the Thing: The Writings of Yorke Edwards, a Pioneer of Heritage Interpretation in Canada. Victoria: Royal BC Museum, 2021. 336 pp. $24.95 paper.