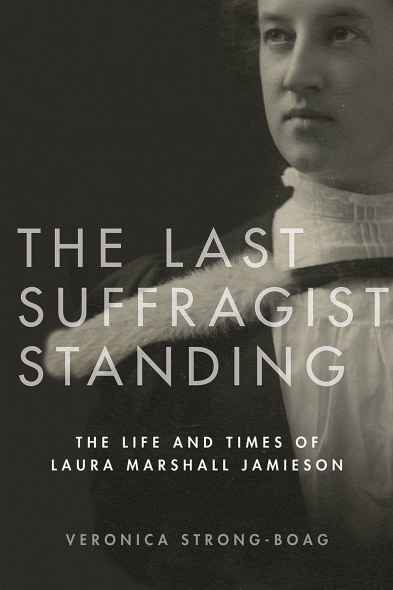 The Last Suffragist Standing: The Life and Times of Laura Marshall Jamieson

Veronica Strong-Boag is one of Canada’s most distinguished women’s historians.  One of the major themes of her publishing career has been Canadian women’s struggle for the vote. Strong-Boag’s expertise in the field is very much in evidence in her fascinating biography of BC suffragist and politician Laura Jamieson, the last suffragist to be elected to a Canadian legislature.  Strong-Boag notes early in the book that she had to work with very limited sources, but she has made excellent use of those that were available.  These included speeches by Jamieson when she was active as a suffragist, and in her impressive work as a three term CCF MLA in the BC Legislature and one term Vancouver city councilor.

Where sources are particularly sparse, as is the case in Jamieson’s early years as an orphaned child living in rural poverty on the Bruce Peninsula, as a school teacher working in B.C. mountain communities to earn enough to put herself through the University of Toronto, and as a young widow with two children in the 1920s who supported her family by becoming a juvenile court judge, Strong-Boag is careful not to speculate beyond the sources.  However, in these cases Strong-Boag’s deep knowledge of the existing literature in Canadian women’s history gives us a broader sense of what Jamieson’s life must have been like in those years of hardship.

Similarly, in chronicling Jamieson’s early years as a suffragist, Strong-Boag makes excellent use of the limited sources available about Jamieson’s own suffrage work and ideology, while at the same time drawing on her knowledge of the women’s suffrage movement in BC to tell us not only about Jamieson, but at the same time to provide a detailed and fascinating history of the broader suffrage movement in the province.  Strong-Boag had access to more evidence regarding Jamieson’s career in the BC legislature, but Jamieson’s career is again placed in the context of the (very few) other women elected to the BC Legislature in the late 30s and early 40s.  Strong-Boag clearly reveals the hostility Jamieson and other women faced in the larger political sphere, while also noting that the five women elected to the BC legislature in 1941, including Jamieson, would be the highest percentage of women politicians in that legislature until 1972.

Strong-Boag skillfully presents Jamieson as a product of her time, in her lack of recognition of the suffering and dispossession of Indigenous peoples.  At the same time Strong-Boag also traces Jamieson’s challenging of anti-Asian racism in the 30s and 40s, where she moved far beyond many of her contemporaries. We are also shown the limits of how far Jamieson was able to go there.

Strong-Boag clearly traces how in a number of other ways Jamieson moved beyond many of her sister suffragists, as she moved to the left over her career, focusing both on the inequalities of gender, and also of class – championing the concerns of working-class housewives and children, and women in the workforce.  Strong-Boag also presents fascinating insights about how Jamieson lived her politics.  For example, an advocate of co-operatives in various spheres of life, in 1941 she moved into a co-operative house in Vancouver with nine other working women with whom she shared expenses and chores.  In addition to its focus on Jamieson, this book also provides important details about the history of the CCF in BC in the decades from the 1930s to the late 50s, providing a clear sense of both its strengths and its deep sexism. Jamieson worked hard to make a difference, although she was disappointed that women’s political gains from suffrage were not as great as many had hoped.

In a fascinating biography that is also a history of left and feminist politics in BC, Strong-Boag ends with short passages from four of Jamieson’s granddaughters, who discuss the influence that Jamieson had on their lives. This provides an innovative way to demonstrate that women like Jamieson had an influence both in the broader political sphere, as well as within families and over generations.