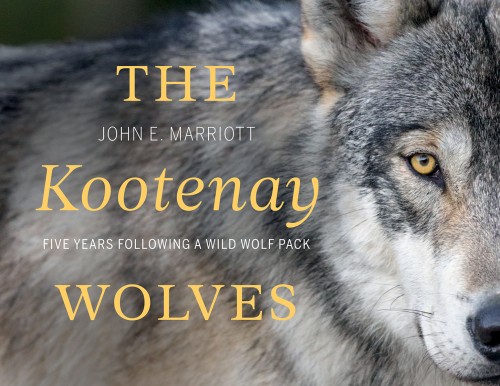 As much as The Kootenay Wolves is a moving portrait of a Kootenay National Park family of wolves, it is also the story of John E. Marriott’s growing and deepening abilities in photography.  We are taken on a journey of discovery, as members of the Kootenay pack are revealed one by one, and as Marriott details his attempts to effectively establish the least intrusive relationship possible between photographer and Canis lupus.  Incredible photographs on each page beautifully reveal the intimate yet voyeuristic relationship Marriott built with these wolves, and the accompanying written story provides some of the context and details about how he painstakingly grew to know the pack without them knowing him.

Marriott’s writing brings alive the issues facing wolves in our national parks and outside parks’ somewhat protective boundaries.  Detailed maps and extensive data are not provided, but this dedicated photographer shares his unique and valuable insights into the countless perilous hazards facing the Kootenay wolf family for which, by the end of the story, Marriott helps us feel deep emotional concern.

Some argue that natural history stories of wolves detract from the work of biologists to portray an accurate scientific representation of the species.  However, in her sweeping review of the literature, academic or otherwise, Karen Jones (2011) concludes that “all wolf tales reflect the trappings of contemporary society.”  In addition, internationally recognized wolf researcher Paul Paquet, who pens the Foreword for The Kootenay Wolves, provides a wholehearted endorsement of Marriott’s work.

One of the more valuable aspects of Marriott’s work shows how national parks provide a space where relationships between animals and people of settler-colonial society can develop; a place in which wolves live in close proximity to the scent of humans.  As Marriott puts it, “If they avoided every single area where they smelled humans, they wouldn’t have anywhere left to go” (108). Despite the pervasive human presence in the parks, Marriott is ethically committed to taking every precaution to not only conceal his presence from wolves, but also his interest in wolves from other photographers.

However, like a budding romance, the eager excitement of innocence builds throughout the story of Marriott’s dedication to getting to know these wolves.  He demonstrates a deep concern for each individual wolf, and the amount of time spent searching, waiting, and learning is truly admirable. Throughout the text, Marriott takes time to reflect and verify that his conduct is responsible to the well-being of the wolf family.

Marriott passionately advocates for the conservation of wolves throughout and points to outdated, colonial management practices in the provinces.  For example, wolves can still be shot year-round in many parts of British Columbia and Alberta, and their deaths do not have to be reported.  As a consequence, “No one knows how many wolves get killed each year during hunting season on the park boundary” (150).  A tragic, moving encounter with trapping enforces just how deep a relationship Marriott has built with this family of wolves.

While exceptional as a work of photography alone, Marriott’s story of wolves in Kootenay National Park is a truly inspirational tale of how one person can earn, through dedication, devotion, and skill, a sacred glimpse of one of the most wary, mysterious, and complex creatures in the Rocky Mountains.