The Grizzly Manifesto: In Defence of the Great Bear

The Black Grizzly of Whiskey Creek

The Bear's Embrace: A True Story of a Grizzly Bear Attack 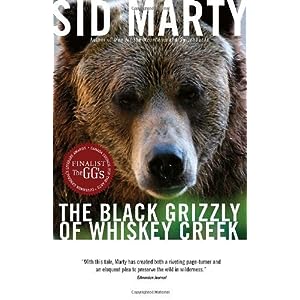 Grizzly bears have long been emblematic of British Columbia’s wilderness. But despite symbolism, human activity has adversely affected grizzly populations in the province. Although more than 16,000 grizzlies are found in the mountainous regions of British Columbia and Alberta, many scientists, conservationists, and environmentalists are concerned about the bear’s future.[1] Three recent publications shed light on the complex relationship between grizzlies and humans. These books remind us that human-grizzly encounters can lead to both human and ursine casualties. Together, they suggest that British Columbians — and Canadians more broadly — should reflect on the impact human activity has taken on grizzly habits and habitats.

In different ways, each book explores the complex and often violent nature of human encounters with grizzlies. Sid Marty’s The Black Grizzly of Whiskey Creek tells an evocative story about the hunt for the “Whiskey Creek mauler,” an elusive bear that attacked and brutally disfigured a man in Banff National Park in the summer of 1980. An intersection of environmental conditions and human error made Banff a likely place for dangerous human-bear encounters that summer. A decline in berry growth — caused by the eruption of Mt. St. Helens — forced hungry bears to go in search of alternate food sources. Many of Banff’s bears scavenged near the town’s hotels and restaurants. This precarious situation was exacerbated when several establishments blatantly ignored garbage disposal rules and Parks Canada failed to enforce the regulations. As international media attention threatened to disrupt Banff’s tourist economy, Parks Canada came under pressure to find the bear. In its haste, the agency made costly mistakes. In addition to exposing these mistakes, Marty argues that they served as harsh lessons for the agency. Although his argument is blunted by masculinist and anti-modern sentiments, his broader indictment of environmental relationships resonates very clearly: “[i]t is this failure to acknowledge humankind’s disproportionate appetite for everything from food to new highways to second homes built in bear habitat that leads to conflict with the bear” (19).

The potential for such conflict is realized in Patricia Van Tighem’s book, The Bear’s Embrace: A True Story of a Grizzly Bear Attack. Originally published in 2000, this harrowing memoir tells the story of Van Tighem’s battle with the lasting effects of a grizzly attack. In September 1983, a mother grizzly attacked Van Tighem and her husband while they were hiking in Alberta’s Waterton Lakes National Park. While writing had always been an important part of her life, it became therapeutic as she dealt with the chronic pain and depression that resulted from the attack. One of Van Tighem’s strengths as a writer is her ability to convey lucidly the grief she endured during and after the mauling. Her narration of the attack is stark yet evocative:

In 2005, Van Tighem chose to end her life. The success of her memoir, now in a third edition, speaks not only to the power of her writing, but also to a widespread fascination with stories about human-grizzly encounters.

Switching to the complexities of managing grizzly populations, Jeff Gailus’s The Grizzly Manifesto: In Defence of the Great Bear is a short but forceful condemnation of grizzly conservation in Canada. Gailus posits that the unrelenting encroachment of humans into bear country is directly threatening grizzlies in Alberta and British Columbia: “More than 100 years after we invented the concepts of ‘protected areas’ and ‘wildlife conservation,’ the overheated engine of techno-industrial Progress is still driving the bears north and west like cattle” (19). But grizzly defenders have found themselves up against formidable opponents. Gailus argues that the British Columbia forestry industry has mounted a “slanderous” PR campaign and claimed that conservation groups “want to shut forestry down and turn the region into one big park” (39).  He also believes that Parks Canada has failed to strengthen conservation measures, which has resulted in unsustainable grizzly mortality rates. Although his critique is incisive, Gailus’s argument falters as he proposes solutions in his final chapter. He suggests that environmental protection could be strengthened if the Canadian legal and legislative systems became more like their American counterparts. While this is an intriguing idea, Gailus fails to acknowledge the broader complexities inherent in this argument. Nonetheless, his book will appeal to those concerned with grizzly conservation in British Columbia.

In 2013, the David Suzuki Foundation released a report, authored by Jeff Gailus, on grizzly bear conservation in Canada.[2] Gailus claims that a troubling number of grizzly subpopulations are at risk of declining or disappearing if the status quo is maintained. This is especially true in British Columbia where nine of fifty-six subpopulations are listed as threatened. Each of the books reviewed here considers the nature of interactions between humans and grizzlies. While the stories are quite different, each suggests that we can change the way we interact with grizzlies and the environment more broadly. This critical insight will be very valuable as British Columbians continue to address the dilemmas associated with human activity and industrial development in bear country.