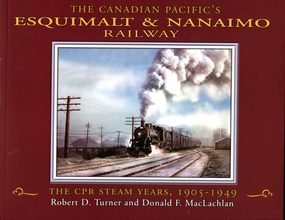 While the roundhouses are now mostly silent and only the occasional freight train makes its way up and down the island, the Esquimalt & Nanaimo Railway (E&N) occupies a prominent place in Vancouver Island’s history. Using land and cash provided by Canada, coal baron Robert Dunsmuir completed the complex task of building the line in 1886 from Esquimalt to Nanaimo. Over the years it was extended across the harbour to Victoria and north to Courtenay. After 1905, under the Canadian Pacific Railway, a link was started from Wellington to Port Alberni and completed in December 1911. With its one million acre land grant, including minerals below the surface, the railway was important to the economic development of Vancouver Island. This story is covered in the first part of the series, The Esquimalt & Nanaimo Railway, The Dunsmuir Years: 1884-1905 by Donald F. MacLachlan, a second generation E&N employee who spent his entire working life on the railway before retiring in 1983 as the senior locomotive engineer.

For this second installment of the trilogy about the railway, much expanded in format and presentation from the first book, veteran transportation historian Robert D. Turner, with the support of MacLachlan’s estate, became the co-author and principal contributor. As someone who shared MacLachlan’s passion for the railway, Turner is the ideal candidate to complete the series. A brief prelude provides a background leading up to the purchase. The authors show that the CPR wasted no time in reconstructing the railway to meet the larger company’s standards. For the E&N, the 1905 purchase was timely because much of its original track and many of its structures needed costly repairs or replacement. With the purchase, the CPR also acquired the Dunsmuir land grant, which included significant timber rights. James Dunsmuir retained the mining rights to the E&N lands.

The E&N hauled an astonishing assortment of commodities and comestibles including logs, coal, fish, paper, strawberries, raspberries, beer, wine, automobiles, oil, and tons of up-island cordwood to heat Victoria’s homes. One gets the feeling that the railway was considered “family,” with engineers and conductors known by name up and down the line. People recognized locomotives by the sound of their whistles. Their coming and going became entwined with daily life. We read stories of settlers and newlyweds being delivered to new lives on the island and of young men being carried off to distant wars.

This is a book written for readers with a passion for railways as well as for the history of Vancouver Island. The authors provide a high level of detail about the day-to-day operations of the E&N and an exceptional opportunity to learn about technical details through documents, maps, and photographs. The photos are of excellent quality and carry informative captions. While it does not have footnotes or a formal bibliography — which will appear in the final volume of the E&N trilogy — the four appendices and five pages of sources and notes provide extensive research information. The railway enthusiast and technology historian can learn about the benefits of different locomotives and get a behind-the-scenes look at the E&N’s operating procedures, working routines, and glimpses into the lives of the train crews. For example, crews working on log trains at Lake Cowichan usually had an early morning start, but the exact time varied according to the tidal conditions at Crofton, where the logs were unloaded.

The book reflects the authors’ deep interest in the island’s railway. Their ability to combine an intimate knowledge of workers and trains with daily life on Vancouver Island gives the book the feel of family history, and The CPR Steam Years will appeal to a wide audience of island and railway historians alike. The ongoing story of the E&N Railway will be continued in the authors’ next book, The Canadian Pacific’s Esquimalt & Nanaimo Railway: The Diesel and Dayliner Years, 1949-2012, forthcoming from Sono Nis Press in 2013.