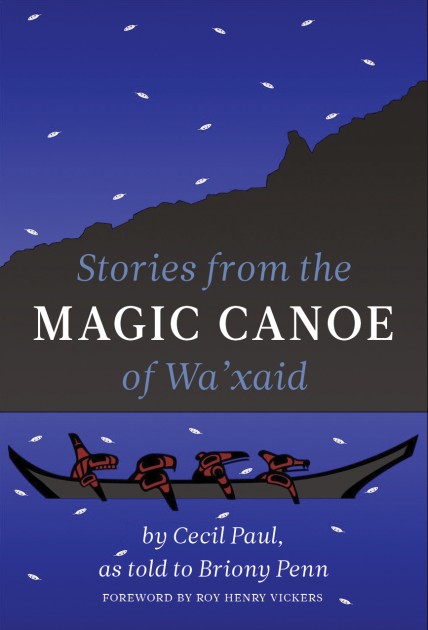 Stories from the Magic Canoe of Wa’xaid

The Story of the Wa’xaid’s (Xenakaisla elder Cecil Paul) Magic Canoe is well known throughout some circles. From coastal rain forest conservation groups to International Indigenous networks, Cecil Paul has been invited to tell his story of organizing for the protection of Xessdu’wäxw, the temperate rainforest known as the Kitlope, throughout the world. In Stories from the Magic Canoe of Wa’xaid, Cecil Paul tells this story in full. It is also the story of his life, which is transcribed and edited by Briony Penn, detailing the “many arrows” (19) of colonialism on the Xenakaisla, Paul’s battles with residential schools, and the historic efforts to save the Kitlope from industrial logging. It is a valuable contribution to Indigenous history, in the vein of books like Tshaukuesh Elizabeth Penashue’s Nitinikiau Innusi: I Keep the Land Alive(2019) and Johnny Neyelle’s The Man Who Lived with a Giant (2019).

The Magic Canoe is a metaphor for the journey Paul travels in his attempts to keep the Kitlope as a living legacy for future generations of Xenakaisla and neighbouring Haisla. On this journey, he welcomes all those who are willing to “paddle together” (13) to this destination in his ‘supernatural’ canoe (31). Indeed, the paddlers he has welcomed include community members, Indigenous leaders, international celebrities (he tells the story of meeting Harrison Ford at a fundraiser and not recognizing him), and environmental activists (legendary logger Merve Wilkinson and David Suzuki stand out).

The Magic Canoe is a story of resilience and resistance, as it details the struggles Paul has faced, struggles that are put in the larger history and context of settler colonialism. For example, through the stories told in this book we understand that the value of the Kitlope is precisely because it is the anchor to a community that has been decimated by colonialism. We learn of the small pox epidemic, the consolidation of three villages by decree of the Indian Agent, and the flooding of neighbouring valleys. Paul tells of his experience at residential school in Port Alberni, his times working as a longshoreman, a fisherman, and miner, all of which were clouded by alcoholism. His healing journey starts with a return to the Kitlope, the place of his birth, and a conversation with the spirit of his Grandmother.

The episodes of Paul’s life and activism are told in story format – we are invited in to these stories as if we are in his living room.  Penn’s extensive notes add clarity, detail, and background. The footnotes themselves are worth the price of entry, as they illustrate an exceptional familiarity to the context of Paul’s story (Penn is coming out shortly with a biography of Paul). She consults primary sources (including the records of the residential school Paul went to), scientific literature (to tell us, for example, that the Kitlope represented 2% of the remaining temperate rainforest on earth), and personal interviews (notably including the CEO of the logging company that relinquished the license of the Kitlope) to add depth and insight to Paul’s stories. It is the combination of two stories, the oral history and the archival history, that makes The Stories of the Magic Canoe of Wa’xaid a powerful model of Indigenous history. Penn’s footnotes are not there to validate Wa’xaid’s stories, which are powerful indictments of colonialism in and of themselves. Rather they expand the scope, linking the Kitlope to Indigenous experiences throughout the world. This book is a welcome read for those interested in the history of conservation in British Columbia, the practice of Indigenous memoir, and the specifics of colonial history in Canada.

Fletcher, Alana, and Morris Neyelle, eds. 2019. The Man Who Lived with a Giant: Stories from Johnny Neyelle, Dene Elder. Edmonton: University of Alberta.