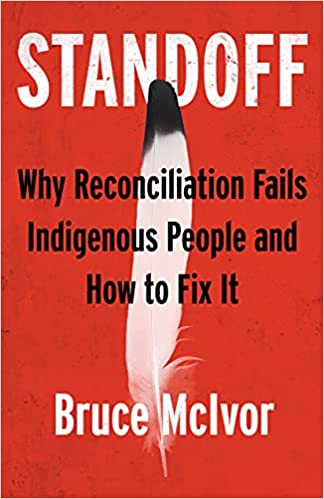 Standoff: Why Reconciliation Fails Indigenous People and How to Fix It

Given the failure of constitutional negotiations to define the meaning of Aboriginal rights and title recognized in Section 35 of the Canadian Constitution – a failure that marks the recalcitrance of provincial and federal governments to meaningfully share power – the Supreme Court of Canada (SCC) has become a key player in the politics of reconciliation. Bruce McIvor’s Standoff: Why Reconciliation Fails Indigenous People and How to Fix It provides readers with a portrait of the politics of reconciliation, particularly within the legal field. For non-specialists, the jurisprudence of reconciliation appears dizzying. Industry and its supporters have capitalized on this confusion to minimize obligations and so the rights of Indigenous peoples. McIvor enters this ideological struggle on the side of Indigenous peoples, providing clarity in support of Indigenous self-determination. Still, McIvor does not shy away from the ambivalence of the law for such struggles, and so directly and indirectly raises important questions for the politics of reconciliation more generally.

Entering Canadian law through the 1888 St. Catherine’s Milling decision, the racist legal principle of the Doctrine of Discovery purports to ground Canadian sovereignty and underlying title through simple “discovery”, effacing Indigenous sovereignty. This Doctrine circumscribed democracy in the more expansive sense of sharing power, constituting Canada as a settler democracy. When reconciliation entered Canadian jurisprudence in the 1990s, this Doctrine was not refuted. According to the SCC, the task of reconciliation involves “reconciling the pre-existing rights of Indigenous Peoples with the assertion of Crown sovereignty”. For McIvor, this assertion is but “a Canadian euphemism for the Doctrine of Discovery”. Instead of repudiating a racist, colonial doctrine, reconciliation in the SCC remains governed by it. This is why reconciliation fails.

As an Indigenous rights lawyer, McIvor is familiar with the deep ambivalence of the law. In some instances, the courts have been willing to view rights as sources of protection (i.e., Desautel). But protection can also fade into control. Whereas Indigenous peoples have interpreted Section 91(24) as both protection from “local settler majorities” and recognition of their own jurisdiction, the SCC has read 91(24) in terms of control, that it facilitated Canada’s westward expansion (i.e., Daniels). A common critique of the role of law in struggles for justice zeroes in on the appeal to the state as a protector, eclipsing the role of the state as an agent of injustice and a vision of freedom as sharing power. McIvor’s analysis of Indigenous rights suggests that this is a one-sided view of such struggles. Indigenous legal struggles are not simply about protection from power but a demand to share in its exercise. One question that McIvor’s text raises for this reader – and indirectly for the politics of reconciliation – is whether the courts are able to facilitate this sharing. At times, McIvor defends the substantive obligations that come with the duty to consult and the justification for infringements, while noting that these stop short of a consent-based framework based on sharing in the exercise of power. At other times though, McIvor suggests that legal decisions can facilitate the sharing of power. This is strongest in McIvor’s analysis of Tsilhqot’in, where the SCC found that failure to consult and accommodate could result in the cancellation of projects and that governments and industry would be liable for damages. On his reading, this decision “shift[s] the duty-to-consult equation in favor of Indigenous peoples”, which might lead government and industry to “obtain the consent of Indigenous peoples” to “avoid the uncertainty and risk”. Moreover, the declaration of title opens space for a new treaty process that might substantively share power. The ambivalence of the law exceeds the moment of the decision to the place of law in a larger social structure: namely, the gap between higher and lower courts as well as between legal decisions and state action.

Often a good description of a problem is the first step towards fixing it. If reconciliation fails because of a refusal to acknowledge Indigenous self-determination, for it to succeed requires an end to this denial and for the federal and provincial governments to enter good faith negotiations to share power. This would mark the end of settler democracy. But since the history of settler colonialism is defined by a refusal to share power, what makes things different now? While McIvor’s answer to why reconciliation fails is commendable for its clarity, it remains socially thin. If reconciliation fails because of a denial of Indigenous self-determination, why the denial? At times McIvor suggests reliance on resource extraction from Indigenous peoples lands as a motivating factor. The problem then becomes challenging this reliance. While the law might facilitate the sharing of power, we have already seen how it remains ambivalent. How do we get from here to there then? For McIvor, rather than a direct confrontation with the question of state dependence on Indigenous peoples’ land, the promise appears to rest in activating a politics of morality, where non-Indigenous Canadians – and sometimes corporations – mobilize alongside Indigenous peoples to force the state to share power and live up to its legal obligations. The end of settler democracy then appears to require a shared exercise of power to share power.

I’m not sure whether a politics of morality is a sufficient vision to sustain this endeavor however. McIvor’s comments on the consent versus veto debate though is suggestive for this problem too. Contra veto fear-mongering, McIvor points out that that governments and industry might be surprised by potential alignments when pursuing the framework of consent. Might this apply to alliances that operate below and against the state and industry, and resource extraction more generally too? Perhaps just as important as the clarification of legal rights for the ideological struggle against colonization is the motivating power of Indigenous visions for a shared future.

McIvor, Bruce. Standoff: Why Reconciliation Fails Indigenous People and How to Fix It. Gibsons, BC: Nightwood Editions, 2021. 208 pp. $21.95 paper.