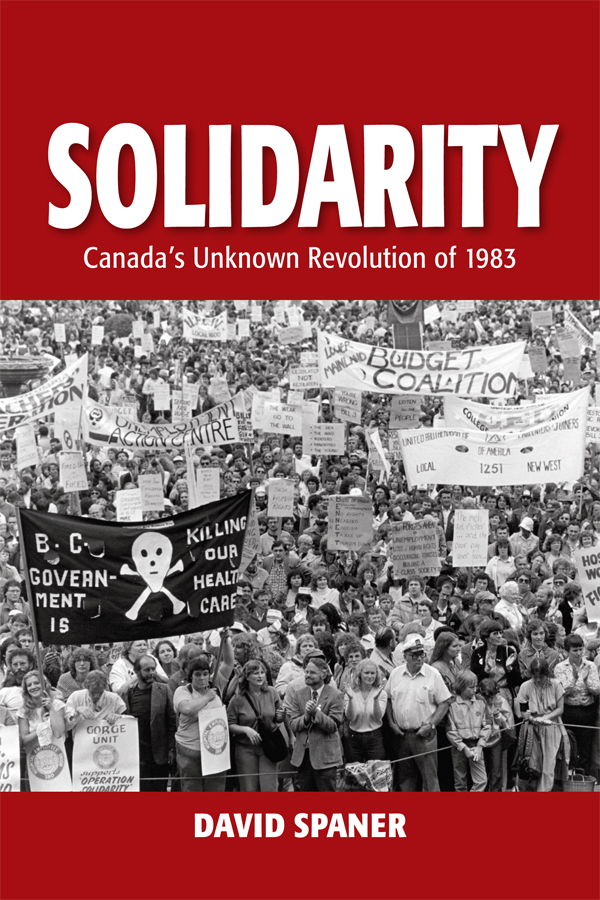 This is a book in search of a genre. As history, the curtain comes down on this story after a disappointing first night. But as theatre, it would undoubtedly have a longer and more satisfying run.

The author, David Spaner, is a journalist with a counter-cultural 1960s bent. His politics congeal Abbie Hoffman and Emma Goldman, the punk band DOA, the left-wing of the modern-day NDP, and a nostalgic fondness for the class struggles of the 1930s. Spaner lived through and covered the momentous events of 1983 in British Columbia known as Solidarity, writing for a New Westminster paper, The Columbian.

Solidarity began, not as a movement from below, but as a lowering of the boom from above. It ended, sadly, not dissimilarly.

Almost 40 years ago, a Social Credit government led by Bill Bennett introduced 26 pieces of legislation that dismantled collective bargaining rights in the public sector and gutted provisioning in health care, welfare, and an array of social services. This 1983 assault, done in the name of downsizing government and implementing fiscal restraint, followed a political playbook drafted by the architect of neoliberalism, Chicago School economist, Milton Friedman.

British Columbians of all kinds rallied in opposition. They waged a 130-day campaign to force the provincial government to rescind the entire legislative package. Huge rallies in Vancouver and Victoria, occupations of government offices and institutions like the Tranquille mental health facility in Kamloops (scheduled to be shuttered by the government), nightly meetings, and publication of a weekly newspaper, Solidarity Times, left no doubt as to the agitated state of the west coast.

Originally kicked off by a Lower Mainland Budget Coalition and a feminist contingent, Women Against the Budget, Solidarity owed its beginnings to the broad left, which included dissidents in the Vancouver and District Labour Council, some of whom were affiliated with the Communist Party. Soon, however, the movement came to be controlled by a powerful labour officialdom, ensconced in the upper echelons of the British Columbia Federation of Labor. Presiding over the BC Fed at the time was Art Kube, a moderate social democrat with a history in the red-baiting struggles of the Cold War that divided 1950s trade unions. Kube orchestrated the bifurcation of the opposition. Organized labour constituted Operation Solidarity, while the community groups and left activists were hived off in the Solidarity Coalition, whose material wherewithal came from the coffers of Kube’s Federation. Ultimate decision-making was vested in a narrow layer of trade union tops whose concerns were always quite restricted, at the same time that a façade of wide-ranging public, social justice concern was erected, behind which militants could be marshalled, if not entirely constrained.

A timetable was laid out, in which staggered strike action by unions loomed large. Many called for a General Strike; some thought it was in the offing. The labour officialdom managed to nurture this illusion while, behind closed doors, scotching any possibility of a province-wide walkout.

Spaner considers Solidarity a Revolution that he claims is unknown.  It was never a Revolution. Whether it really is unknown is open to discussion.

This is not to deny that it was a formidable moment.  People, hundreds of thousands across the province, were marching and meeting, dancing, defending, and debating. Spaner captures well the exhilaration of the times. He does this by relying on oral recollections of individuals involved in the 1983 events. They convey the atmosphere of audacity, its festive collectivity of resistance. Interviews with these people range broadly over their lives, reaching back decades and situating personal developments in the cauldron of conflict that was BC in 1983.  Interspersed with these narratives is what passes for an account of the Solidarity movement. Unfortunately, the actual flow of events and complex relations of the movement’s dual components often come across in ways that are interrupted and obscured by anecdotal outlines of the lives of Spaner’s informants, which routinely detail what they were doing decades before their involvement in Solidarity.

As history, Spaner’s account is disappointing.  The narrative is spotty and disjointed, although the writing can be fast-paced and at times quite readable. Documentary sources consulted are slight, especially given what has come to be deposited in various archives over the last decades. Decisive interpretive issues and an analysis explaining what happened is lacking.  If Solidarity is now “unknown,” Spaner himself does not help:  he fails to confront what has been researched and written about British Columbia’s boisterous extra-parliamentary opposition. This body of research, argument, and political commentary – which includes a small book I wrote in the aftermath of the 1983 mobilizations — is not insignificant.  It raises many issues Spaner and his readers would benefit from confronting, and often presents a picture at odds with his own. It is not incumbent upon him to agree with anything in this literature. It is necessary to engage with it.

Failing to do so means Spaner misses much of central importance. Nowhere is this more apparent than in Solidarity’s brutally abrupt termination and its impact on the political culture of British Columbia. International Woodworkers of America union boss, Jack Munro, stood on Bill Bennett’s Kelowna patio and, after a private discussion between the two men, announced the end of a months-long struggle. A battle dedicated to the eradication of an entire legislative package was scuttled for a few clauses in the collective bargaining agreements of the British Columbia Government Employees’ Union, which gave trade unions a template for how to bargain themselves out of two key bills passed in the Socred ‘restraint’ package. It was a defeat for the left that hung over the province for years, perhaps decades.  I recall graffiti in East Vancouver that, at the time, captured the feeling of despair that engulfed many swept up in Solidarity’s promise: “Rise up, eat shit and die.”

The book could have been an interesting play. Imagine a wizened journalist holding forth at his table, a glass never far from his hand. A parade of friends and others, with whom he linked arms during a tumultuous and formative time in his life, traipse through his kitchen. They reminisce about a struggle that once was, and needs to be refought, but is a long way from realization. As the dialogue flows with drink, their makings as youths, concerts attended and causes embraced, parents who were radicals or reactionaries, books they were influenced by, sexual escapades, friends they grew up with, and how it all prepared them for the marching in the streets that animated the summer and fall of 1983, are bandied about. Conversations confront the past and how it structures our present. Why did things happen the way they did? As the consequences of consequences that are poorly understood through the shadows of decades done are recalled, people grapple with what led them to where they are, but not to where they wanted to be. It would be intriguing theatre.