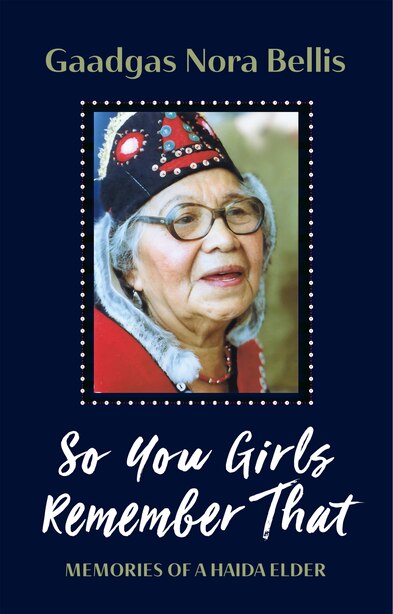 So You Girls Remember That: Memories of a Haida Elder

Review By Leslie A. Robertson

Every morning when I build the fire and when it start to go, if it’s scattered over, you have to poke it and put it together and it start to go. That’s the way life is. We have to be together. [Gaadgas, p. 181.]

Sometimes, one encounters a book that is uniquely so dense with relations that this scaffolding comes to represent it for a reviewer. So You Girls Remember That is such a work. It is a life narrative bundled in a social project that began in 1992, when Gaadgas Nora Bellis told her friends and family that she wanted to “record her memories” (xiii). The setting is Haida Gwaii. These reminiscences told in the 1990’s reach back through three or four generations of oral memory, through the mythological past-present of Haida traditions and into the imagined futures so often visible in life stories. The people who initially caught Gaadgas’s stories include her late son Charlie Bellis; her friend, Maureen McNamara (also deceased); and, the current editor/ author, Jenny Nelson. The book’s acknowledgements also reveal a small universe of contributors, a hybrid coalition of experienced knowledge holders (including relatives, language experts, scholars of various kinds). They listened, recorded, transcribed and translated. They (generously) contextualized customary knowledge or cultural meanings that may not be apparent to all readers. They worked from Xaad Kil to English, on renditions of story cycles and a broad range of cultural and historical accounts. Not only are these collaborators referenced, but their voices are also included as they contribute to topics raised by Gaadgas. I appreciate these voices and archival additions that make the process of textualizing oral accounts transparent.

Life history work involves a process that is intensely collaborative. In every act of speaking, tellers and listeners are entangled in various kinds of relations. There are social dynamics among storyteller(s), listener(s) and characters; other storytellers who have relationship to the story; and, other listeners who have a relationship with what is being brought into being. These relationships have everything to do with the knowledge that is produced through story-telling, so much so that many suggest that life stories are themselves multi-vocal. For those who enter into this generative process, the greatest puzzle is about how to shepherd a story, a life narrative, to wider audiences. Moving from speech to text, Jenny Nelson’s choices adhere closely to listening practices. Nora Bellis’s speech is not altered for English grammar conventions; it retains the spoken inflections of a bi- or trilingual speaker. The text is often arranged in the style of ethno-poetics that evokes a certain rhythm. Inevitably, textualizing verbal materials requires other editing decisions too. Nelson organized narratives into a chronology and, here and there, a traditional narrative was compiled from several, separate tellings. One hundred and thirty-five footnotes take readers into worlds that open up from a phrase, name, game, symbol or song, particular tricksters and ancestors. Numerous photographs (that could be larger) introduce readers to the sites and people who are key to Nora’s narratives: villages, canneries, houses, totem poles, boats, families, school groups and jam sessions. While the primary text is the close-to-verbatim narratives of Gaadgas, this work also connects with relevant literatures, colonial archives, anthropological ethnographies and linguistic scholarship; with biographical details about those who figure into Nora Bellis’s tellings. Her place in the Haida social world is narrated genealogically, through her mother Gudaa xiigans, Susan Bennett and then her father, Duuan ‘iljuus, Captain Andrew Brown; their clan histories, villages and accomplishments. Stories Gaadgas shares reflect the wealth of Haida knowledge practices as she draws on cultural imagery and expressive conventions. Near the middle of the book, a set of narratives are skillfully woven around a bear song that originates from a story at the Yakoun River. Gaadgas describes how “it carries [her] all over the place,” that she “travels with it” (69). It connects her to her father and to those to whom she passed it; to the Skidegate dialect and performance traditions; to the gendered realm of supernatural activity.

Nora Bellis (1902-1997) was an active interpreter of her own life transitions. Readers are privileged, I think, to witness the arc of her life as she describes both daily events and periods of extraordinary change. Like many Indigenous narrators, Gaadgas’s stories intersect with experiences of Indian Act prohibitions and colonial violence, but they are punctuated throughout with the vitality of Haida knowledge and teachings — about technologies and economies and the vast network of relationships and practices that inhabit the deeply storied, land and marine-scapes. Climate change, recipes, carving, ship building, logging, canning, gardening, medicine, jokes, music, existential teachings – all have a part in the rich imagery that Nora Bellis chose to share. There is nothing rigid in her accounts, they convey the lifeworld of a charismatic Haida storyteller, musician and philosopher. I am left with a sense of the integrity of relations that contributed to this obvious labour of love, friendship and community. This spirit continues as book royalties are donated to the Carl Hart Legacy Trust to support the T’aalan Stl’ang Rediscovery Wilderness Youth Camp.