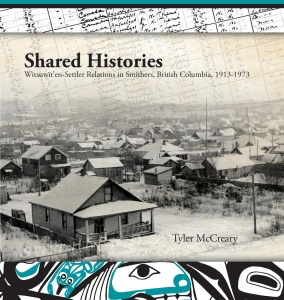 Geographer Tyler McCreary’s book about Witsuwit’en-settler relations in Smithers is a valuable new addition to research and writing on histories of place in settler-colonial contexts. Shared Histories demonstrates how academic work can be integrated with local efforts by Indigenous and settler communities across BC and Canada as they grapple with the complexities of settler-colonialism and work to respond to the Truth and Reconciliation Commission Calls to Action (TRC 2015a). Theoretically grounded in Doreen Massey’s understanding of towns as the products of meetings between peoples (Massey 2005, 9), and building on work by historical geographers about Indigenous-settler relationships in the region prior to the establishment of the railroad (Galois 1993, 2007; Ray 1985, 1991), Shared Histories aims to capture “the dynamic character of the social processes shaping a place and the ways that they change over time,” examining spatial transformations in Smithers across the 20th century through archival documents and oral histories.

McCreary grew up in Smithers and acknowledges his positionality as a settler academic. As a doctoral researcher, he learned of the Witsuwit’en community’s desire to explore the history of Indiantown, a largely Witsuwit’en neighbourhood that flourished in Smithers until it was displaced by settler development pressure in the late 1960s. The refusal of the settler community to acknowledge this dispossession had significant impacts on the relationships between Witsuwit’en and the town, and while municipal councillors and mayors were aware of the issue (thanks to organizers like elder Peter David), they lacked the funding to do anything about it. Aware of the appetite in Smithers for such research—particularly after the release of the TRC’s Final Report in 2015—McCreary and a joint Witsuwit’en-settler working committee designed a project to document the history of Indiantown and the wider context of Witsuwit’en-settler relationships.

The stories of Smithers are told through McCreary’s analyses of archival and oral history data from both Witsuwit’en people and settlers, which he presents in a coherent narrative accessible to both academic and public audiences. The accessibility of the final research product is key, because Shared Histories draws on the historical consciousness of many to illuminate what has shaped Smithers into the place it is today: Witsuwit’en presence on the land before settlement, how and why Northern Interior BC was settled, Indigenous displacement and the formation of Indiantown, the impacts of the Indian Act (including differential access to health care, discriminatory policies around alcohol, and loss of Indian status through marriage), economic shifts over time, and attempts at community planning, ending with the destruction of Indiantown and a look forward to Smithers’ future.

Published by a local press in Smithers, the book’s format (23 x 24 cm) provides enough space for readers to envision through maps and images what the voices on the pages are saying about the spatiality of the town. They are shaped by relationships between the residents and their day-to-day lives under the emergent local, provincial, and federal governments. While it does not provide detailed methodology for data collection and analysis, the book would be teachable in a variety of social science contexts including geography, First Nations and Indigenous studies, anthropology, history, and sociology, at both undergraduate and graduate levels.

As both a research project and product, Shared Histories can serve as inspiration to other municipalities whose leadership and citizens are looking to confronting their colonial histories. It should also inspire researchers looking to design projects attuned to local needs, who can access funding opportunities and make things happen. Across British Columbia and Canada, people struggle to have open conversations about how, exactly, the places they live were established in territories already used and occupied by Indigenous peoples, because a major crux of reconciliation is understanding the systemic logics of settler-colonialism that justify settler possession of lands and extinguishment of Indigenous rights and title (TRC 2015b, 29). Untangling all of this can be daunting, but Shared Histories shows that the process can be helped along by making space for stories to be told, and ensuring those stories are accessible to people who live in those places and beyond.

—. 1991. “Fur Trade History and the Gitksan-Wet’suwet’en Comprehensive Claim: Men of Property and the Exercise of Title.” In Aboriginal Resource Use in Canada: Historical and Legal Aspects, edited by Kerry Margaret Abel and Jean Friesen. 301-16. Winnipeg: University of Manitoba Press.