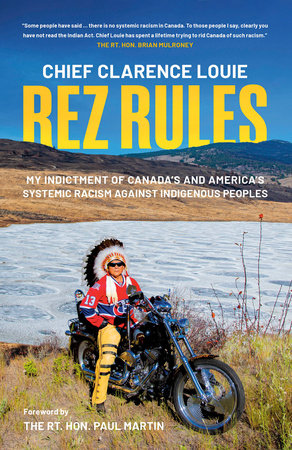 Rez Rules: My Indictment of Canada’s and America’s Systemic Racism Against Indigenous Peoples

With this book, Chief Clarence Louie (y̓ilmixʷm ki law na) of the Osoyoos Indian Band (OIB) illuminates the Indigenous experience in Canada — a nation built on systemic racism. As one of the country’s most impactful leaders, Louie has rescued Indigenous voices from the fringes of settler-society and helped his people to cultivate land in traditional and non-traditional ways to create the “Miracle in the Desert” (xiii).

Elected as Chief of the OIB at the age of twenty-four, Louie has led his community for approximately four decades. Countering misconceptions about Indigenous Chiefs and bands,

Louie explains, “Chief and council are not the only leaders on a Rez…Anyone who collects a paycheque on behalf of a band or tribe hold a leadership position” (5). Inspiration from OIB members has allowed Louie to transform his previously poverty-stricken community into an economic powerhouse. Unlike government bureaucrats who collect their paycheques and pensions, money that could otherwise be used to improve the conditions of Indigenous Peoples, Louie used his power to create more jobs on the reserve than there are members. Speaking against hard truths and making decisions that would increase the economic development of the OIB, Louie hopes his book inspires his people to “act and live like hard-working people as [their] ancestors once did” (11).

Of course, the journey to achieve this impact took work. Louie began his life avoiding rez bombs and embracing tough love, experiences which eventually gained him a ‘66 GTO, work experience, and education. As a youth, Louie was inspired by Indigenous scholars who wrote about “Indian resistance” (23). He even experienced one of his earliest memories of leadership during “The Run,” which stood for “Treaties Honoured Entirely—Reservations Under Natives” (28). As a participant in this political and spiritual event, Louie was one of the best runners and he never gave up. While others took breaks or found an easy way out, Louie learned that real leaders do not take it easy or rest. Instead, “a leader takes on extra responsibility and does things a majority of people don’t want to do” (31).

Through this strong-willed personality, Louie strives for the best for his community and its future. Yearning for his people to take power back into their own hands, Louie writes, “I want us to get back on our Indian ‘economic horse’— to create jobs, real career-orientated jobs, and make our own money instead of waiting around for the next grant” (151). There is also something to be said about Louie’s resiliency and aspiration as an example for leaders seeking to overcome intergenerational trauma (39). Finally, Louie notes that internal fights are not sustainable for the community in the long-term. Rather, leaders must be willing to stand up, take responsibility, and get things done for the collective good.

With the future of his children, grandchildren, and band at stake, Louie looks for real leadership potential. However, the criteria of a good-hearted, hard-working, diligent, educated, and culturally motivated youth is only the beginning of what a Chief is (6). In addition, real leadership requires authenticity and understanding that “in a real democracy, it’s okay to disagree and still be on the same team (9).” Fortunately, Louie’s Rez Rules guides feature leaders to pony up and become the leader their community desires. Hopefully, that person is someone who buries their heart on the rez (326).