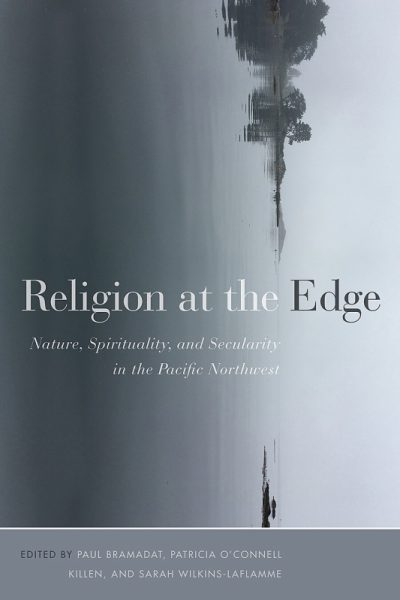 Religion at the Edge: Nature, Spirituality and Secularity in the Pacific Northwest

I read this book shortly after studying new historiographical work comparing the cross-border experiences of Rochester, New York, and St. Catharine’s, Ontario during the Underground Railroad.   Thus, I turned from the Niagara region to this multi-disciplinary cross-border study of Cascadian spirituality.    Religion at the Edge is part of a flowering of American-Canadian comparative studies that is transforming views of North American culture and history.  Since the various contributors to the Cascadian volume see that region’s religious experiences as a possible paradigm for all North America’s future, it is good to note that this volume parallels studies emerging from other cross-border regions.

The Centre for Studies in Religion and Society sponsors this volume.  Experts in philosophy, theology/ religious studies, sociology, history, law, political science and Indigenous studies came together to conduct a field survey of Cascadian spirituality.  They shared findings and drafts with each other and made changes under each other’s influence, as clearly described in the text. Even readers who may not be that interested in religion will find in this volume a fine description of scholarly interaction.

The contributors initially designated four main trajectories to explore about Cascadia.    First, the region, in contrast with other areas of North America, was born secular and remains so, often through family heritage over many generations   Second, a small if still shrinking number of liberal and mainline Christian denomination still functions there.  Third, there is a persistent presence of relatively conservative Christian and non-Christian religious communities, much due to immigration, holding traditional social values.  Finally, the authors set out to explore a general openness to spiritual seeking within Cascadia, a trend heavily influenced by individualism and libertarianism.

The contributors reached several conclusions.  Cascadia’s religious experience is different from the rest of North America, with many inhabitants finding spiritual fulfillment outside traditional religion. However, they also believe that the weakness of organized religion in Cascadia—a tendency so great that the region is often designated the “None Zone”— will soon prove to have been prophetic of a growing secularization of the whole North American continent.  What the contributors name as “Reverential Naturalism” is the essential foundation of regional spirituality.  Indigenous tradition and the modern environmental movement inspire this reverence for the Earth.

Finally, the border continues to matter in how American and Canadian Cascadians approach all these questions.  The contributors found that British Columbians are more sensitive to Indigenous influence than Americans, for the Indigenous culture in BC is both larger and more activist.  They also found greater appreciation for immigration in Canada, and a higher willingness to involve an activist government in the task of caring for the community. These variations stand out within the otherwise shared culture.

The volume ends with a call for further studies in certain areas.  The authors believe more examination is needed of remote rural areas such as northern BC and eastern Washington and Oregon.   They also raise important questions about the potential role of Cascadian spirituality in promoting racial reconciliation throughout the continent.

A historian like myself has questions about the possibility of predicting the future.  Will organized religion really grow as weak in all North America as in Cascadia itself?  It is too soon to tell.  Speaking also as a Catholic and Jesuit priest, I see a rich potential for dialogue between the incarnational theology of the Catholic Church and Cascadia’s reverential naturalism.   Spokespeople for other denominations may come forward with suggestions of their own for dialogue.  Meanwhile this volume has laid an indispensable tool for any such dialogues, and it is highly recommended as a tool for meeting Cascadian people where their spiritual heart is.