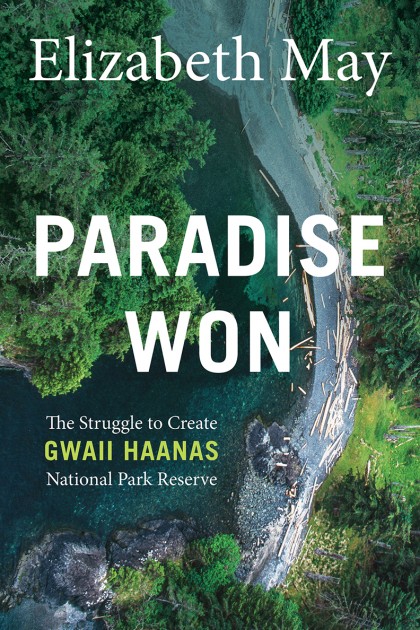 Knowing that Paradise Won: The Struggle to Create Gwaii Haanas National Park Reserve would end in the establishment of a park offers no relief from the sense of urgency that reading the book elicits. Usually, knowledge of the ending to a story dampens its emotional stakes, but Elizabeth May, before her days as Green Party Leader, successfully wrote a highly informative chronicle of the campaign to end logging in what is now the Gwaii Haanas National Park Reserve. Based on a combination of interviews and May’s own personal experiences as a key contributor to the park’s foundation, the result is an ideal text for both university classrooms and book club reading lists.

As a regional historian of the Pacific Northwest, I am more often struck by the similarities between British Columbia and its American neighbours than their differences, but this story presents a case in which difference was crucial. Almost from the start, I began crafting in my mind a syllabus that paired Paradise Won with journalist William Deitrich’s chronicle of the so-called Timber Wars in 1980s Washington, The Final Forest: Big Trees, Forks, and the Pacific Northwest (1992). Beyond their subject matter, the two books resemble one another in both structure and style; each made up of many short, highly readable and evocative chapters that focus on a single person, event, question, or – quite significantly – bird. The differences arise from the Haida First Nation’s position within British Columbia and the profound connection, as seen in the words and actions of Haida leaders such as Guujaw Edenshaw, between the protection of Gwaii Haanas from logging and Haida sovereignty and cultural resilience. For Haida leaders, creating a park was only ever a means to protect land and water under their stewardship, not an end in itself.

Chapter ten offers Paradise Won’s first major turning point and touches the heart of why environmental campaigns are fundamentally Indigenous issues. At the close of the chapter, Dr. David Suzuki, host of CBC’s The Nature of Things, interviews Guujaaw for the show. When asked why Gwaii Haanas was so important to Haida people, and what might happen if the islands were logged off, Guujaaw answers, “If they’re logged off, we’ll probably end up the same as everyone else, I guess” (79). This response “we’ll probably end up the same as everyone else,” is precisely the motivation that seems to have prompted the republication of Paradise Won, three decades after its original release and with an appropriate new subtitle. Something resembling paradise was won in Gwaii Haanas, but Indigenous-led struggles to protect land and water in British Columbia and elsewhere remain as urgent as ever and perhaps, as May hopes, this thirty-year-old victory can spur further triumphs in the future.

The halfway point, measured by chapters, bears the ominous title “In Which the Fight Is Nearly Won.” It was at this juncture that the creation of a national park became the foremost strategy to end logging in the archipelago and the main site of confrontation in the story began to shift away from the logging road to the government offices of Victoria and Ottawa. In this latter half of the book, when the author herself enters the story, the contest between federal and provincial power becomes the greatest source of tension. The bureaucratic channels of government were never meant to produce the sensation of a thriller novel, but the closer Paradise Won gets to the story’s end, the more credible seems May’s assertion that establishing the national park reserve was little less than miraculous. “The wait is excruciating,” I repeatedly told a friend as I turned the pages. One can only hope that the book’s sense of urgency translates into action on the part of readers.