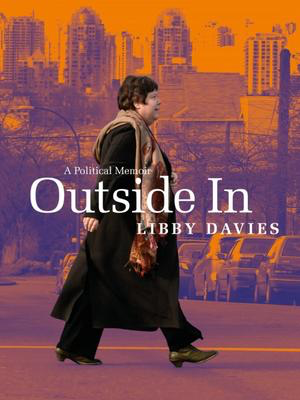 Outside In: A Political Memoir

Outside In can be read and enjoyed as a straightforward memoir of Libby Davies’ remarkable career as an activist and elected official.  It traces her path from her early days working for housing justice in Vancouver’s Downtown Eastside to her time as a key figure in the NDP’s heady days as the Official Opposition. Along the way we are treated to first-hand accounts of her involvement in campaigns on housing, drug policy, peace, same sex marriage, environment, sex work, and many more.

Davies’ strong belief in direct action for change put her on the front line of these and many other struggles. We find her with Greenpeace swimming around a US nuclear capable warship, and on a street corner staging a hunger-strike for housing. Her telling of these and other struggles always centres the vast network of activists she worked with and the individual people she fought for.

The book is very open about her personal life. Reading about her loves and losses reminds us that it is human beings who do the work that leads to change. Her candour about doubts and mistakes and finding a way forward in the very toxic male political world in Ottawa is an object lesson in how simple courage and principled leadership can overcome.

As compelling as these elements are, the real value of the book lies elsewhere. Politics has developed a discouraging pall in recent years: the rise of Trump and his imitators in Canada; Brexit; fake news; the fixation on horse-race polling; and, “hot takes”. It all paints an ugly picture of the practice of politics. This book is the perfect tonic. Time and again we see Davies patiently and relentlessly practing a different and better kind of politics.

The various campaigns Davies recounts have a common pattern. Working with real people who have been pushed to the margins, she finds the dignity and truth of people who deserve better. She then finds allies and builds networks both inside and outside of government. She breaks open public dialogue with audacious acts, and then firmly and practically finds a way to thread the political needle to negotiate important reforms.

Time and again the book shakes the reader awake with a reminder that politics, when done right, can make people’s lives better.

I once met Davies in a community health centre in the Ward I represent as a Toronto City Councillor. She was touring the country to build support for a harm reduction approach to drug addiction. This was shortly before the current opioid crisis emerged as the most dangerous public health crisis of our generation. Recently, that same health centre opened a safe injection service, one of several that have opened in the past few years. Daily, these services save lives. Without her leadership (and as she points out, the leadership of many others) many thousands more Canadians would have died.

Outside In is written in clear, direct prose, making it available to a wide audience, which it deserves.