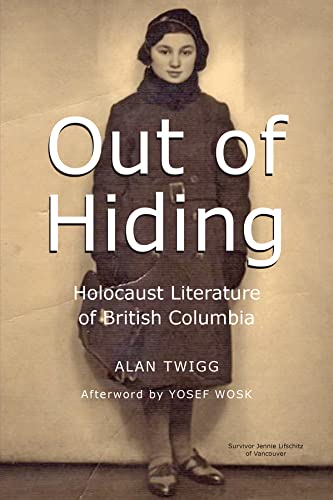 Out of Hiding: Holocaust Literature of British Columbia

In the beginning, there was Robert Krell. A Dutch hidden child survivor who became professor of psychiatry at UBC, Krell is the patriarch of Holocaust remembrance in British Columbia. His medical career was devoted to the treatment of Jewish survivors of the Holocaust and other victims of trauma. Taking a leadership role in BC’s Jewish community, in the 1970’s Krell co-founded the committee that led to the creation of the Vancouver Holocaust Education Centre. In 1978 he organized the first project in Canada recording the testimonies of Holocaust survivors and in 1982 created an organization devoted to bringing child survivors together to share their unique challenges. Appropriately, this dense volume is dedicated to him.

In Out Of Hiding: Holocaust Literature Of British Columbia, prolific writer, journalist and polymath Alan Twigg fulfills a self-imposed injunction to contribute to the collective responsibility of to know “more than just a little” about the Holocaust.(1) Not only does this volume include the personal stories of survivors who settled in BC, it adds a multitude of historical detail in each section. Twigg strives to contextualize individual experiences of the Holocaust in a way that offers general readers a wider understanding of the immense scope of the Shoah. A section on a survivor from Greece, or Hungary, or France includes the history of the lost world of European Jewry in each locale and other stories of horror, survival, rescue, and resistance. The back cover of the paperback describes it as an “illustrated, patchwork quilt of memory and history”. Indeed, Twigg has tried to include everyone who has ever lived in BC and written about their Holocaust experiences, created visual art or commemorative exhibits, scholarly articles, poetry or fictional accounts relating to persecution during WWII in Out of Hiding.

The volume begins with detailed entries about three “Leaders” of BC remembrance: Krell, Robbie Waisman and Rudolf Vrba. Waisman, who was fourteen when he was liberated at Buchenwald, is another leader in western Canada’s survivor community. Like many profiled in this volume, he arrived in BC later in life, contributing both in Calgary and Saskatoon as a survivor speaker and Jewish community volunteer. However, the real focus of this section is on Vrba – a remarkable camp survivor whose escape from Auschwitz-Birkenau in the spring of 1944 (in conjunction with three other Slovak Jews, including Czeslaw Mordowicz who settled in Toronto) resulted in a detailed report on the camp that was passed on to the Allies. Twigg’s focus on Vrba, who is certainly an important actor in Holocaust history, is unsurprising since he created a website solely focused on Vrba’s life. However, it can be argued that many of the others cited in the next two sections, organized by names in alphabetical order, are deserving of more detail.

Included are Leon Kahn, a former partisan; Eva Hoffman, a child of survivors whose memoir and other non-fiction works are staples of Holocaust literature; H. Peter Oberlander, a leader in BC’s urban planning who was interned in Canada as an enemy alien during the war; Jennie Mines, likely the only Canadian-born citizen to survive the concentration camps, and Richard Menkis, a UBC historian and child of survivors who is a pioneer in the scholarship of Canada and the Holocaust. Adding to the “patchwork”, the volume ends with a theoretical essay about hiding by Vancouver scholar, rabbi and philanthropist Yosef Wosk.

This is by no means a scholarly work. The biographies lack chronology and are often hard to follow. It would have benefited from judicious editing. Yet Twigg set himself an enormous task and BC readers will be rightly impressed with the compilation of local sources on the Holocaust.

Tom Perry was a doctor who entered Buchenwald concentration camp nine days after it was liberated. He wrote his wife about what he had witnessed. His photos and letter are preserved by the Vancouver Holocaust Education Centre and reprinted here. Perry wrote: “I saw things I have never seen before…That’s what I saw today. The unadulterated, entirely unexaggerated truth.  There was much more than that, but I can’t begin to describe it in words.”  Out of Hiding serves as a witness and an important contribution to Holocaust memory.