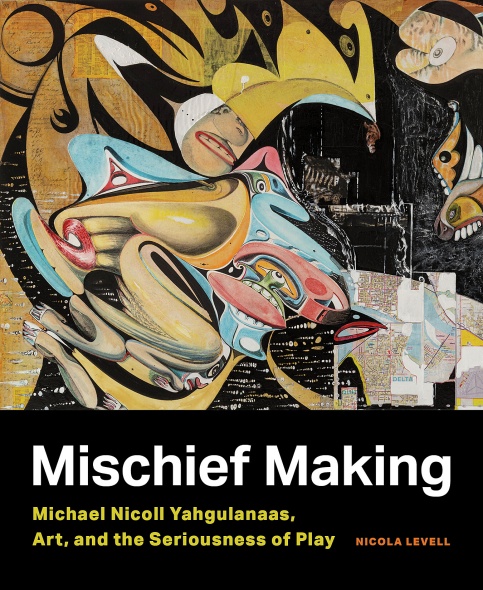 Yahgulanaas belongs to the Haida Nation who inhabit the islands of Haida Gwaii off the west coast of British Columbia, Canada. The Haida are renowned for their unique culture and artistic achievements that have taken shape in close relationship with the lush temperate rainforests and marine environment of Haida Gwaii. Under colonial rule, Haida aesthetic traditions, embodying the spiritual, legal, and political life of the people, were discouraged by missionaries and banned by the Canadian government. Many Haida belongings were destroyed, confiscated, or stolen, and handed over to museums. These measures, in addition to the residential schooling systems and coerced Christianization, nearly eradicated Haida society. The Haida have been working to rebuild and renew their traditions through a resurgence in cultural practices and political movements that began in the latter half of the twentieth century. It was into this context of resurgence, renewal, and reclamation that Michael Nicoll Yahgulanaas was born in 1954.

As one might expect, Indigenous rights, spirituality, activism, industrial resource extraction, and anti-colonialism are all prominent themes in Yahgulanaas’ art. Perhaps the most distinctive feature of his work is the persistent challenge to see things in a new light and unsettle taken for granted understandings. As Levell phrases it, “he provokes viewers to reflect on the relations between different aesthetics and systems of value and contemplate alternative ways of seeing, representing and knowing the world” (62).

The book is organized into five chapters exploring the artist’s visual practice as it has unfolded in the twenty-first century. The narrative moves from his background as an illustrator, carver, and land protector in Chapter One, to considerations of more recent textured collages and abstract experimentations in Chapter Five. In between, Levell draws comparisons between Yahgulanaas’ art and the Pop Art Movement (Chapter Two); the artist’s graphic narratives and their connection to Haida society and the medium of manga (Chapter Three); and an exploration of Yahgulanaas’ repurposed and culturally modified mixed media sculptures (Chapter Four).

Each chapter exemplifies the playfulness, mischief making, and punning that are ever-present in Yahgulanaas’s work. The central theme running throughout the book, which is successfully communicated in the text and nearly one hundred and fifty images, is the artist’s commitment to what he calls “hybridity”. Levell articulates hybridity in relation to postcolonial theorist Homi Bhabha’s notion of “third space”. In short, author and artist are referring to a new and independent entity that emerges from cross-cultural encounters. Notably, “third space” is also a term that will be familiar to the intended audience of students and scholars of art history, and of visual and museum anthropology.

Levell holds Yahgulanaas up as a modern artist who draws on his Indigenous heritage and various other influences. This reality—evident in the artist’s work itself—effectively frees Yahgulanaas from the settler-modern/Indigenous-traditional binary that frequently haunts Indigenous artists and their creations. Levell’s skill as a writer shines in her vivid descriptions and analysis of art works included and not included as illustrations. Her academic knowledge and experience as a curator is also on full display in the relationships she traces between Yahgulanaas and other contemporary artists. However, the thick analysis tends toward a curatorial tone akin to reading extended interpretive labels in a museum or gallery. Additionally, with so much attention placed on cross-cultural mixing, borrowing, and inspiration, there is a missed opportunity for a discussion on appropriation, appreciation, and the power dynamics that define them.

The work of Michael Nicoll Yahgulanaas is truly dynamic. Levell’s closeness to the artist and the inclusion of his voice provides a wonderful glimpse into the ontological and epistemological foundations of his art. He is a fascinating internationally renowned artist, the imagery he creates is mind bending, and Levell’s book is a wonderful exposition of that fact.