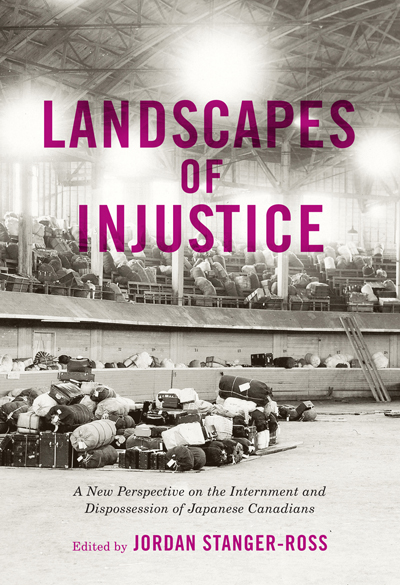 Landscapes of Injustice: A New Perspective on the Internment and Dispossession of Japanese Canadians

In historical memory, the forced confinement and exclusion of 22,000 Japanese Canadians from 1942 to 1949 remains one of the darkest and, unfortunately, least understood chapters in Canadian history. Although the story has been told before, by authors such as Ken Adachi, Ann Gomer Sunahara, Frank Moritsugu, and Greg Robinson, plus creative artists such as novelist Joy Kogawa and poet Takeo Ujo Nakano, studies on the traumatic experiences of removal and confinement are still emerging. These new works uncover unexplored aspects of the experience and deepen our understanding of the larger event.

As such, Landscapes of Injustice is a particularly impressive and unprecedented study. The product of seven years of research conducted by a collective organized by historian Jordan Stanger-Ross of the University of Victoria, Landscapes of Injustice provides one of the first comprehensive studies on the Japanese Canadian wartime experience and the erasure of Japanese Canadian communities from the West Coast. Comprised of fourteen essays and organized by themes of the law and historical memory, this edited volume does an excellent job of both documenting the numberless tragedies of removal and honoring its victims.

In particular, the volume’s focus on the forcible confiscation and sale of Japanese Canadian property by the Canadian government – a stark difference from the Japanese American experience, as noted by the authors – represents an important contribution. This official dispossession underscores one of the more horrific aspects of forced removal in addition to the camp experience. This volume identifies how Glenn McPherson, the executive assistant to the Custodian of Enemy Property, developed the idea of despoiling Japanese Canadians of their property in order to prevent their postwar return to the West Coast. As the authors note, the underhanded means by which a cabal of individuals, led by British Columbia-based cabinet minister Ian Mackenzie, orchestrated wholesale liquidation of Japanese Canadian property offers an example of the fragility of civil liberties during wartime. While the scope of this edited volume is limited to the relationship between Japanese Canadians and their government, these essays provide an excellent starting point for future conversations about property losses, settler colonialism, and human rights.

Another strength of this volume is Stanger-Ross’s wise inclusion of Japanese Canadian activists as contributors to the volume, which allows the authors to strike a nice balance between the legal history of dispossession and the lived experiences by those suffering its consequences. Furthermore, the volume’s discussion of the removal’s contemporary legacies – whether through statistical analysis of current-day locations of Japanese Canadian communities or anecdotes from those that remember it – helps remind readers that the wartime policies, and the white supremacist intentions of their planners, continue to shape the present physical and legal landscape of Canada.