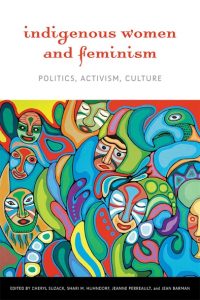 The unique circumstances of indigenous women are often overlooked in the literature on both mainstream feminism and indigenous activism. Indigenous Women and Feminism: Politics, Activism, Culture is thus a welcome addition to the existing scholarship. This volume brings together scholars and activists from various disciplines, including English, Women’s Studies, Law, History, and Ethnic Studies. Despite varied approaches, the authors share a commitment to taking indigenous women’s distinct experiences seriously in their own right. Pamela McCallum notes that indigenous feminism “has sometimes been characterized as a contradictory positioning that asks women to choose between their ancestry and their gender” (254). This book moves beyond this either/or characterization by revealing the complex and multifarious relationship between indigenous women and feminism in both past and present.

The book opens with a section on politics, in which Rebecca Tsosie explores Native women’s leadership in contemporary Canada and the U.S., and Minnie Grey reflects upon her involvement in Inuit society and politics. In this same section, Patricia Penn Hilden and Leece M. Lee probe indigenous feminist work within the academy, while Laura E. Donaldson traces the struggle for sovereignty reflected in early Cherokee women’s writing. The second section on activism includes an article by Cheryl Suzack on the gendered implications of the Indian Act in Canada, and one by Jean Barman on the agency of Northwest Coast Aboriginal women “on the cusp of contact.” ann elise lewallen departs from the North American focus in her analysis of the activism of indigenous Ainu women in Japan. Kim Anderson traces her personal journey to feminism, grounded as it was in her personal experience of motherhood and indigenous traditions. Teresa Zackodnick examines the call for coalitional feminism embodied within Anna Julia Cooper’s 1891 essay “Woman versus the Indian.” In the final section on culture, the authors explore indigenous women as both producers and subjects of art, fiction, and other cultural media. Shari M. Huhndorf and Katherine Young Evans reveal how theatre has been used to expose the links between patriarchy and colonialism, and to disseminate indigenous feminism. As Patricia Demers shows, documentary film has also been ably used to challenge conventional representations of indigenous women. Native art and poetry, examined by Pamela McCallum and Jeanne Perreault respectively, have figured significantly in efforts to reclaim and give voice to indigenous memory and history. No discussion of indigenous feminism would be complete without attention to the violence that was (and is) perpetrated against indigenous women; the representations and realities of such violence are addressed by Julia Emberley in her analysis of Wiebe and Johnson’s Stolen Life, and by Elizabeth Kalbfleisch in her exploration of Rebecca Belmore’s Vigil.

This collection is cross-disciplinary and collaborative, containing articles by both indigenous and non-indigenous authors. Taken together, the articles illustrate the deeply gendered character of colonialism and its aftermath, and offer rich examples of indigenous women’s agency today and in history. The editors aptly note that a “single, normative definition of indigenous feminism remains impossible” (2). Because the contributors do not ascribe to any unitary notion of indigenous feminism, this collection captures multiple definitions and perspectives; this also means, however, that the guiding questions that are meant to lend cohesion to the collection are, at occasional points, difficult to discern. The volume is also somewhat uneven in tone, certain of the articles being more formal and research-oriented and others more personal and reflective. As with all cross-disciplinary collections, this one presents organizational challenges, and the division of the book into the sections of politics, activism, and culture seems arbitrary given the considerable overlap between the sections. These are, nonetheless, minor points about a very impressive volume that embraces and engages with the diversity and complexity of its subject matter.

This collection reveals the importance of indigenous women to the ongoing struggle for both indigenous rights and gender equality. It brings to light many examples of indigenous feminist practice, and compels a broadening of conventional understandings of feminism. Indigenous Women and Feminism will surely help to fuel ongoing, critical conversations on the meanings, priorities, and practices of indigenous feminism in Canada, the United States, and beyond. As such, this volume is sure to be of great interest to scholars and activists alike.