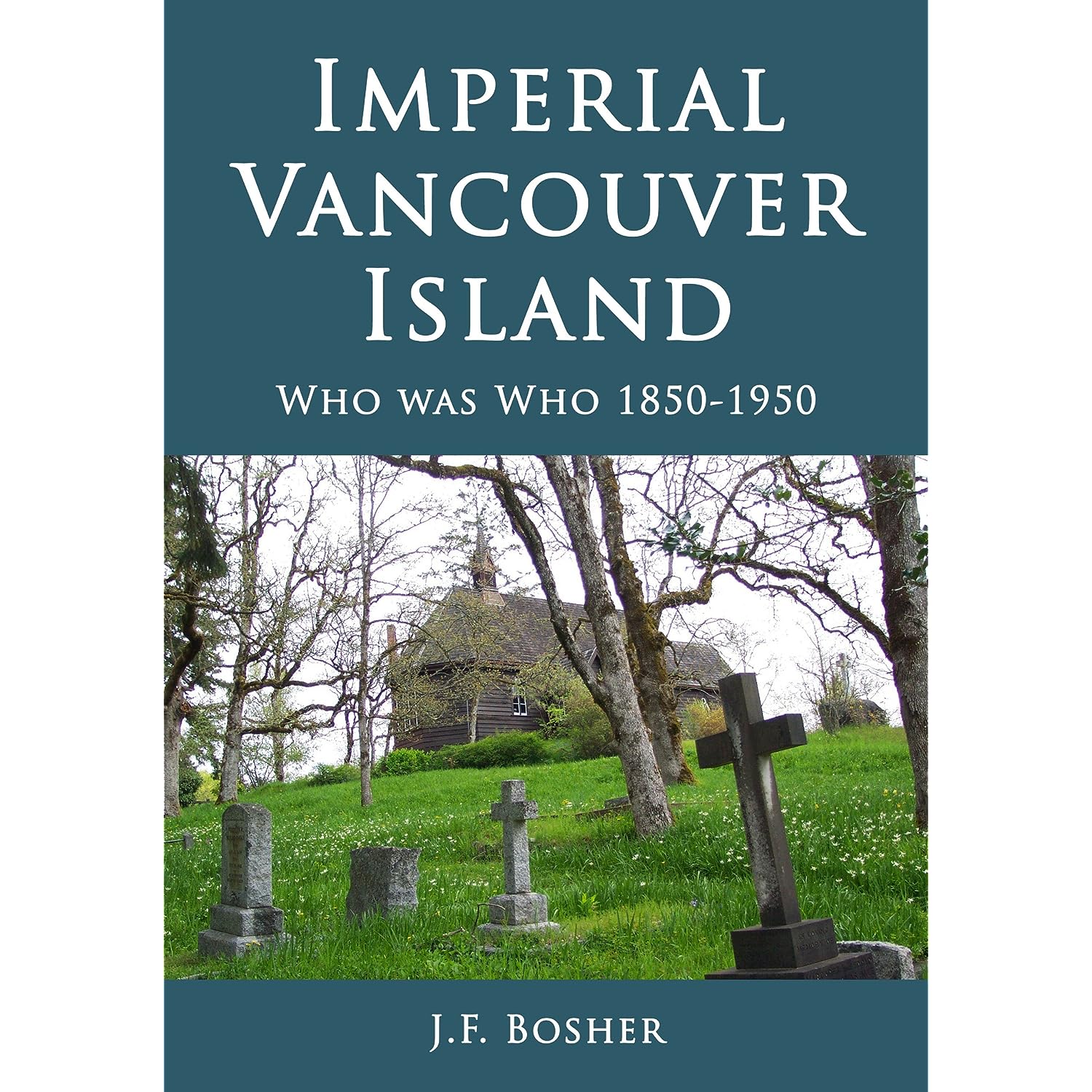 The author of this work, Professor J.F. Bosher, was born in North Saanich near Sidney, British Columbia and raised in a cultured English family. Having retired from York University in Toronto, where he specialized in the modern history of France and French Canada, he deployed his considerable research skills on a narrative history entitled Vancouver Island in the Empire (Tamarac, FL: Llumina Press, 2012). In that book, Professor Bosher assessed the region within the context of the British Empire, paying special attention to southern Vancouver Island and a few adjacent Gulf Islands. He focussed on a distinctive group of residents, whom he referred to as “Imperials.” Most of these British subjects were born in the United Kingdom of Great Britain and Northern Ireland; many had attended prestigious British schools and seen military service in British India. When they settled or retired on Vancouver Island, Imperials devoted themselves to their communities, serving as municipal councillors, church wardens, and magistrates. They established Boy Scout troops and Girl Guide companies, amateur theatre guilds and horticultural societies. Imperials accounted for the genteel ambience of places like Cowichan Station, Maple Bay and Oak Bay. They flourished until the 1950s when Vancouver Island was “Canadianized” and, worse, “Americanized.” In this hefty companion volume, Professor Bosher elaborates on the origins, careers, and memories of no less than eight hundred Imperials and their friends. Imperial Vancouver Island is intended not simply as a “biographical appendix” to his narrative history, but as a recognition of “the historic worth of Imperial soldiers, civil servants, engineers, and others too often ignored in an age hostile to what the world now disparages as ‘imperialism’” (12).

This is a remarkable work, insofar as the author has identified and assembled a remarkable number of British gentlefolk in one place. It is a valuable work but like some of the people it chronicles, it is quirky. There is no Introduction to place the subjects in an historical context and in the “Note on Sources” the author is vague. He acknowledges that he has used the Internet for vital events and census records, but he eschews the “rambling and ungainly” URLs that function as Internet addresses. In a brief list of published sources, he cites a few almanacs, biographical dictionaries, and local history books, but he devotes more space to an explanatory list of Abbreviations, such as KCSI [Knight Commander of the Order of the Star of India] and OBE [Officer of the Order of the British Empire]. However, it is evident from notes in the biographical entries that the author has consulted a wide and reputable range of sources. Overall, the biographical sketches are solid. They are well-crafted, informative, and often enlivened with details from World War I attestation records and family reminiscences.

The author has allowed some interlopers into this collection. Inexplicably, there is an entry for Governor James Douglas and a portrait of Prime Minister John A. Macdonald. Chaps like Captain Charles Barrett-Lennard were mere sojourners. Ontario-born Sir Arthur Currie is problematic, although we learn that he “felt comfortable with the Island’s British gentry” and was connected, via his wife and cousin, to quality families in the Old Country (157). But the credentials of most of the Imperials in this collection are impeccable. The longest biographies belong to Lieutenant General Sir Percy Lake, a distinguished soldier and veterans’ advocate, and Major Frederick Victor Longstaff, a “many-sided figure” who was a noted local historian. Most Imperials, such as Colonel Theodore Sandys-Wunch, lived unobtrusively and so may not be familiar to readers of this journal. He retired to a house called Dogwoods near Maple Bay. “Like many other British officers, he took up fishing, gardened with a passion, growing begonias, gloxinias, and many other things, and was president of the local Boy Scouts’ Association for several years” (556).

Imperial Vancouver Island is very much a compendium of Old Boys, since there are fewer than a dozen biographical entries for women. The Imperial sorority includes the founders of Queen Margaret’s School, Miss Norah Denny and Miss Dorothy Geoghegan. There is an entry for Miss Dora Kitto, a naturalist in Victoria devoted to skylarks and other English songbirds. “Skylarks,” the author remarks in passing, “were one of the features of life in North Saanich that cheered many local residents, including my parents, who were perennially homesick for rural England” (548). The compendium includes vignettes of public-spirited memsahibs like Mrs. Claude (Maggy) Moss, O.B.E., of Cowichan Station. A founding director of the Queen Alexandra Solarium for Children, she was in the forefront of a movement that denounced elected MLAs in Victoria for increasing their own salaries. Imperial families on Vancouver Island were often connected by marriage. Grace Rolston, for example, the daughter of a prominent family in Duncan, married Percy Skrimshire, who founded an independent school for boys at Quamichan Lake. Mr. Skrimshire subsequently taught at Shawnigan Lake School, nursery of a second generation of Imperials.

This biographical dictionary confirms research by other scholars about the prevalence and social influence emigrant gentlefolk from the United Kingdom in this part of British Columbia. It confirms the geographic concentration of gentlefolk in and around Victoria, the Cowichan Valley, and to a lesser extent the Comox Valley. Accordingly, Imperial Vancouver Island may be useful to social historians and historical geographers, as well as genealogists and the descendants of Imperial families. Professor Bosher has certainly demonstrated the “historic worth” of these families. But again, this is a quirky book. It would benefit from copyediting and an index. The black and white photographs in the book bring to mind the euphemism of the curate’s egg. A few of the images are clear and pertinent to the text, others are muddy and irrelevant. None of the photographs are attributed. The attractive colour picture on the cover of the book is not identified, but it looks like the Anglican Church of St. Peter, Quamichan. Consecrated in 1877, St. Peters is a shrine to the Imperials of Vancouver Island; many of the subjects of this entertaining and informative compendium rest in its cemetery.