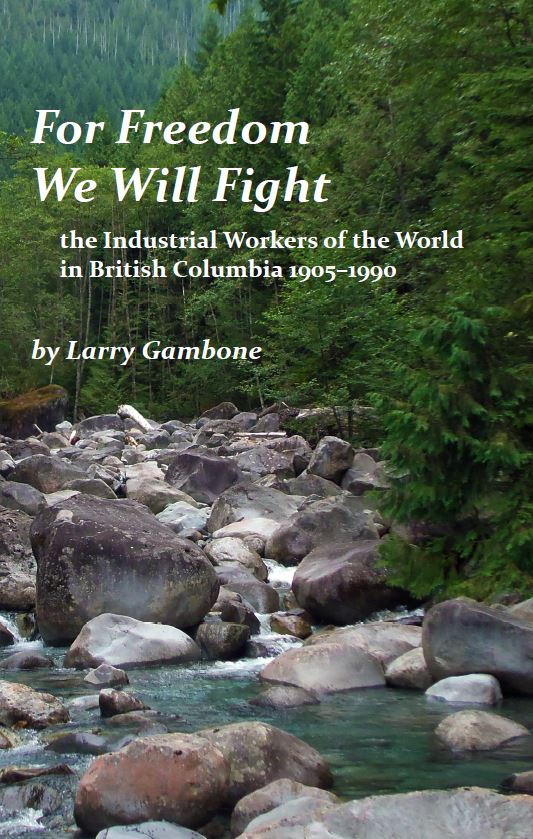 For Freedom We Will Fight, the Industrial Workers of the World in British Columbia 1905-1990

More than a hundred years after losing its prominence, the fabled Industrial Workers of the World continues to resonate as a union without parallel in the annals of labour history in North America. Besides the Wobblies’ unquestioned status as the fiercest, most courageous and revolutionary of all union organizations, they had a romance that is hard to resist. Think of their street corner, soap box oratory, songs that are still sung today (including labour’s universal anthem, Solidarity Forever, penned by the IWW’s Ralph Chapin in 1915), the martyrdom of Joe Hill, tactics that drove authorities and bosses wild with frustration, and simply the image of thousands of itinerant workers criss-crossing the continent in search of work, carrying their cherished IWW cards, after swearing allegiance to the working class. All this has left no shortage of American labour historians to tell their story.

But the IWW was active in British Columbia, too. In fact, the province played a role right from the start. As Larry Gambone points out in his overview of the IWW in BC, For Freedom We Will Fight, it was a delegate from the Kootenays, John Riordan, who led the move at the union’s founding convention in 1905 to call itself the Industrial Workers of the World, rather than the Industrial Workers of America.

This is one of many tasty tidbits in Gambone’s short book on IWW activities in BC from 1905-1990. It’s rather a quirky publication, presenting more of a shopping list of events than a definitive history. For that, there remains Where the Fraser River Flows, the comprehensive account by labour historian Mark Leier of Simon Fraser University.

Gambone, aided by researcher D.J. Alperovitz, has combed through copies of the IWW’s official newspaper, The Industrial Worker, daily newspapers and other publications for virtually any reference to Wobbly activities in BC, and set them down, often without much context or elaboration. A number of the IWW’s many colourful, larger-than-life figures, such as George Hardy, Jack King, Sam Scarlett and “Big Jim” Thompson show up in the book. One would have liked to know more about them than the brief snapshots Gambone provides.

Yet conversely, the book’s predominantly barebone listings effectively showcase the relentless waves of suppression unleashed against the IWW. Apart from their several major strikes, even minor actions by IWW members evoked arrests, jailings, fines, blacklisting, beatings, and sometimes deportations, until the union was banned outright in 1918. Gambone notes them all. He is also the first to take the IWW’s BC history beyond its heyday and subsequent decline in the 1920s. He shows the union could still draw a crowd for a number of years, given the right speaker, while maintaining its Vancouver union hall until 1935. But by 1951, the Vancouver branch was reporting a mere $3 in dues and $2 in initiations.

A surprising mini-revival took place in the 1960s and thereafter, when the IWW was discovered by a number of student radicals, who were accepted into the working class union as “brain workers”. Perhaps because Gambone was among them, with no need to rely on old newspapers, this produces the longest – although not uninteresting – chapter in the book, despite its irrelevance to the ongoing world of working-class struggle.

Should anyone still care about the IWW in 2022? Yes, Gambone contends. He writes: “History shows that a marginal force can have impact on events, when certain individuals pick up their ideas and practices, and utilize them under different circumstances.” [70] Although For Freedom We Will Fight falls short as history (Gambone describes it as an overview), it is nonetheless a useful addition to the canon of IWW writings, as it shines further BC light on this remarkable union and provides enough material to whet the appetite to know more.