David Douglas, a Naturalist at Work: An Illustrated Exploration across Two Centuries in the Pacific Northwest 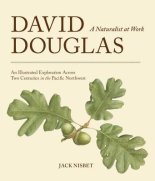 In June 1824, the Governor and Committee of the Hudson’s Bay Company agreed to transport David Douglas, a young Scottish employee of the Horticultural Society of London to its “Columbia District,” to assist the society’s efforts to identify and import potentially valuable ornamental plants from North America’s Pacific Northwest. His three trips to the region between 1825 and 1833, and the fond friendships he formed with other naturalists, help explain why many of the Pacific Northwest’s most familiar plant species were first scientifically collected and described by David Douglas, and why so many species in the region—most famously the Douglas-fir—are named after him. It is also partly because of him that trees such as the Douglas-fir and the Sitka Spruce have become among the most valuable commercial forest trees in the United Kingdom and Europe, and why so many plants from the Pacific Northwest are valued ornamentals there today.

Jack Nisbet’s David Douglas examines Douglas’s legacy from the perspective of a nature-lover. Although the book presents no reinterpretation of David Douglas, it is beautifully written, lavishly illustrated with many high-quality full-colour reproductions, and available at a remarkably low price. The book should be welcomed by anyone interested in Douglas.

David Douglas has not lacked for biographers. George Athelstan Harvey (1947), William Morwood (1974), and Ann Lindsay Mitchell and Syd House (1999) had published biographies before Jack Nisbet contributed his own biography The Collector in 2009. Those with a purely scholarly interest in Douglas will prefer The Collector (ably reviewed by Brownstein in BC Studies) to the present volume. Nisbet’s David Douglas will be especially attractive to the educated and curious members of the public (and academia) who are interested in Douglas, but who also love the natural world of the Pacific Northwest (particularly of Oregon and Washington), who enjoy thoughtful discursive storytelling, and who appreciate a well-produced book. Oriented around Douglas, it is not a biography per se. It is neither chronologically organized nor geared towards understanding David Douglas as a person. Nisbet evocatively transports readers back and forth from the natural world that Douglas encountered in the 1820s and 1830s to the same places in the present-day. Those who love the intersection of human history and natural history are in for a treat. Jack Nisbet and Sasquatch Books are to be congratulated for producing such a handsome book.

Nisbet, Jack. 2009. The Collector: David Douglas and the Natural History of the Northwest. Seattle: Sasquatch Books.

David Douglas, a Naturalist at Work: An Illustrated Exploration across Two Centuries in the Pacific Northwest
By Jack Nisbet
Seattle: Sasquatch Books, 2012. 208 pp. Illus. US $27.95 cloth