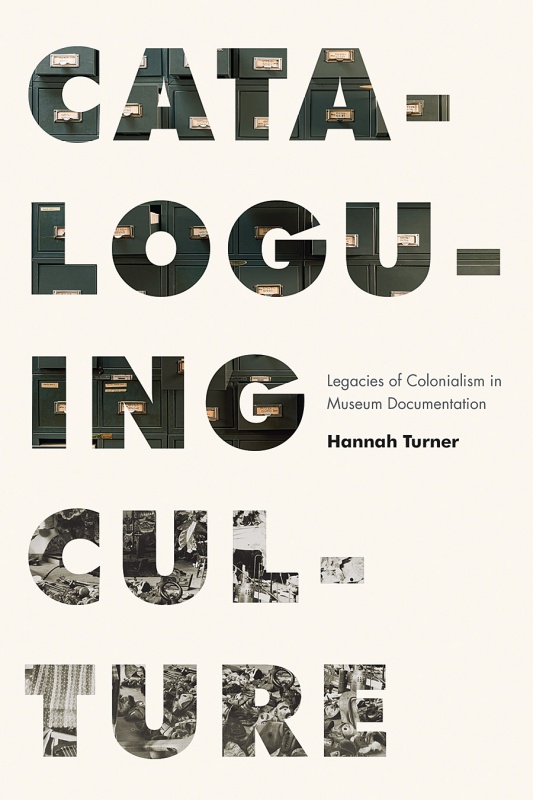 As Hannah Turner points out in the introduction to her timely book, Cataloguing Culture: Legacies of Colonialism in Museum Documentation, “Museum records are often taken to be neutral or privileged sources of knowledge, but they are both contextual and historical, as are many bureaucratic processes” (4). As such, the deeply embedded subjectivity of collections information deserves attention in a time that museums in British Columbia and well beyond are examining – and seeking to change – the ways in which their systems perpetuate colonial attitudes, structures and power relations. Turner’s work takes a particular focus on ethnographic collections as managed by the Smithsonian, but holds lessons for the interrogation of cataloguing much more generally.

Turner has two overarching purposes in this book. One is to plot the historical underpinnings of categorization and cataloguing, linked as they are to western scientific efforts to bring order and objectivity to burgeoning knowledge. The other is to demonstrate how the assumptions and protocols embedded in these systems work to discriminate. It is her goal “to show that ideas about evidence are historically situated and arose out of the communities and techniques of scientific-ethnological practice in the long nineteenth century” (14).  She effectively achieves this goal through thoughtful and engaging analysis in five chapters and a conclusion that trace collecting and documentation practices and their contemporary implications.

The initial chapter, “Writing Desiderata: Defining Evidence in the Field,” sets the stage. Turner describes ways in which 19th century interest in the scientific study of both natural history and humankind influenced the discipline and practice of North American ethnology. Collecting guides, known as ‘desiderata,’ provided ‘non-expert’ collectors in the field with lists of specimens of particular interest, along with instruction on how to preserve objects and document key information. Significant outcomes of this prescriptive approach were detailed classification and cataloguing systems devised to enable scientists to compare and contrast diverse forms of material culture. As the author notes, this systematic approach “enabled collectors in the field and museum workers to slot objects into existing categories of knowledge that they were then able to measure against existing anthropological inquiry” (63).

The following two chapters explore technologies of documentation: ledgers, card catalogues and other forms of recording data in authoritative paper records that lend gravity and authenticity to field data. Such records, assembled by museum workers far from the field, are not without flaws. As Turner points out “the affordances and constraints of the media technologies the museum used to record object collections affected in no small part, how these objects were listed, classified, renamed and reimagined” (19).

In her final chapters and conclusion, Turner analyzes ways in which early practices have evolved in the context of changing values and perspectives, increasing museum bureaucracy, concern about condition, the benefits and limitations of new information management technologies, more systematic data standards and naming protocols, and the imperatives of access, ownership, repatriation, and respect for source communities. In doing so, she offers repeated evidence of the failings of systems to honour indigenous worldviews and ways of knowing. As Turner notes in her conclusion, “Practices and technologies, embedded in catalogues, have ethical consequences, yet paying attention to other histories is often difficult in this context as they are so often completely occluded” (193).

Cataloguing Culture is successful at many levels. It is an important scholarly and teaching resource that clearly maps out the ways in which early efforts to organize collections information adhere to a colonial worldview that privileges some forms of knowledge and ignores others. It is also a valuable – and engaging – resource for museum professionals who are seeking to understand how they can recognize deeply ingrained bias and implement meaningful change in their systems, practices, and relations with source communities.