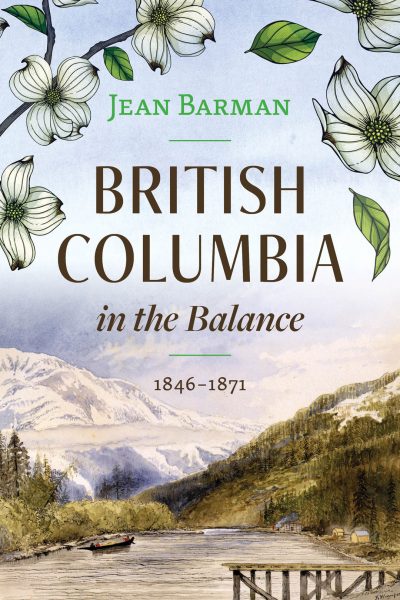 Jean Barman has written another masterful book about British Columbia. Her new work is an analysis of its history from 1846, the year of the Oregon Treaty when British sovereignty was asserted, until 1871 when the colony of B.C. became a province of Canada. Barman’s search to discover how British Columbia was transformed in such a short time from a fur trade realm to a part of Canadian confederation led her to seek out “who was responsible for that outcome and how it was accomplished” (15).

Between these crucial historical “bookend” dates, Barman has formed a thesis based on two complementary perspectives – viewing the past both from the “top down” and from the “bottom up”. James Douglas and the governors of the colony that followed represented the hierarchical top-down perspective.

Barman takes us from the final days of the Hudson’s Bay Company domain to the colony of Vancouver Island in 1849 and the encouragement of settlement by Douglas in his dual mandates over both. The gold rush of 1858 then changed everything, as Barman points out. Sir Edward Bulwer Lytton came on the scene as the Secretary of State to the colonies the year BC became a colony in August 1858.  The Royal Engineers were on hand in 1859 to survey townsites, build roads, and guard against the threat of American annexation and uprisings by the Indigenous population.

Douglas retired in 1864 and Arthur Kennedy became the new Governor of Vancouver Island in March 1864, Frederick Seymour becoming the Governor of British Columbia the same year. After much wrangling took place the union of the two colonies was enacted in November 1866.

Midway through her discourse, Barman pivots to take a different slant looking at the story from a bottom-up view, initially focussing on Anglican Bishop George Hills who came to BC in 1860. Through letters by Hills and Sophia Cracroft we have a visit by Lady Franklin, widow of the ill-fated Arctic explorer, and get a glimpse of the racial diversity of Victoria society including Black, Chinese, and Indigenous peoples.

The Hills chapter is followed by the bottom-up perspective of gold miners. Here Barman touches on settler-Indigenous relations, and then devotes a chapter to “Crediting Indigenous Women,” without whom “…there might well have been no British Columbia in the form we know today” (252). Barman’s thesis ultimately, is that “gold miners and Indigenous women tipped the balance from the bottom up” (16).  According to her thesis, the miners who settled down with Indigenous women and produced families contributed to a stabilizing influence.  However, Barman plays down the role of Indigenous men as miners and their ties to the land.

Surprisingly, Barman does not give much attention to the “Fraser Canyon War”, and the Chilcotin war of spring 1864 is only given a passing reference. Surely these two events[i] presaged the future course of BC history to this day – that of land claims and reconciliation.   Indeed, British Columbia’s development may have taken a different course had it not been for two visionary leaders of the time.  Nlkaka’pamux Chief David Spintlum (Sexpinlhemx) who, in 1858 with support from neighbouring nations, quelled the trouble in the goldfields and made peace. Similarly, Secwépemc Chief William in the Cariboo, who in 1859 persuaded his people from aligning themselves with the Tsilhqot’in Nation, thwarting their plan to expel the incursion of miners and roadbuilders in 1864. On that note, Barman discusses Anthony Musgrave, appointed Governor of B.C. in 1869, leading the colony to Confederation despite a final move by Vancouver Island merchants to join the United States.

Nonetheless, Barman has laid the groundwork for a deeper look at the role of Indigenous-settler relations in this period.

Putting her thesis aside, Barman has compiled a body of data in a style that is clear and direct, using a singular approach to fill an important period. Barman is every ounce the consummate researcher with quotes and footnotes on nearly every one of the 292 pages, followed by an Appendix listing all the members of the Colonial Office, and an index. There is no bibliography, as all references are conveniently covered in the footnotes. The book is an essential read for students and scholars of British Columbia.