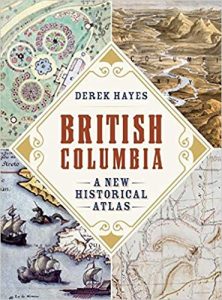 In British Columbia: A New Historical Atlas, Derek Hayes uses over 900 contemporary maps to illustrate the history of British Columbia. The maps are beautifully reproduced, carefully analyzed in captions, often supported by useful historical photographs of the mapped terrain, and contextualized by an episodic narrative history of British Columbia. The core of the atlas focuses on British Columbia’s great period of capitalist development from the 1880s to the First World War, during which railway surveyors, engineers and promoters, mining prospectors, speculators and developers, real estate impresarios, and a host of others interested in making money from land and resources transformed the province.

The labour of workers built British Columbia, but Hayes’ excellent collection of maps, photographs, and documents shows how developers took control of the land and resources and applied an enormous amount of intellectual energy to transforming and promoting them for sale. More broadly, Hayes’ atlas suggests that Euro-Canadian attempts to make sense of, and to take control of, the territory produced some significant works of art in the form of maps, drawings, and illustrations.

British Columbia: A New Historical Atlas shows that, from the beginning, European traders, explorers, and government officials produced maps to find their way and assert control over territory. Hayes includes an 1859 Aboriginal map of the Lower Fraser Valley drawn by Chief Thiusoloc for the United States Boundary Commission, but Europeans drew the vast majority of the existing early maps of British Columbia. Until the gold rushes of the 1850s and 1860s, Europeans drew maps to claim control of the coast and interior against their rivals, to push forward the search for a northwest passage, and to chart their business interests and trade routes. This period of competition produced the distinctive and famous British maps of Vancouver and Thompson, but Hayes also includes the less well-known 1790s surveys by the Spanish officers, Galiano and Valdes. While the Oregon boundary dispute of the 1840s produced maps of differing British and American territorial claims, Hayes’ atlas reveals that both sides also produced a beautiful series of maps for the Kaiser to settle the San Juan boundary dispute of the 1870s. Finally, during the gold rushes, Hayes shows how British and colonial government officials produced an important collection of maps of trails, roads, defences, town sites, and mining claims as part of their effort to control the gold fields. At the same time, entrepreneurs offered services to miners but also produced maps of the gold fields — including amongst the first in a tradition of beautiful “bird’s-eye views” of various parts of British Columbia — for an interested public and gold seekers around the world.

Perhaps of most interest to the readers of BC Studies will be Hayes’ long and nicely assembled and presented section of maps, photographs, and documents spanning the era from the construction of the Canadian Pacific Railway (CPR) in the 1880s to the beginning of the First World War. Hayes provides wide coverage to show how railway development went along with resource exploitation, real estate promotion, urbanization, and the perceived opportunities of the Panama Canal, to transform the province. Hayes’ maps show how CPR and Grand Trunk Pacific Railway construction and routes “made” cities such as Vancouver, Kamloops, Prince George, and Prince Rupert. They also suggest how much power the companies retained in these cities through the ownership of land and location of stations. A series of maps and photographs of the Okanagan valley shows how, after the completion of the CPR mainline, entrepreneurs promoted further railway construction as part of plans to develop and promote irrigated orchard lands.

In general, the highly speculative nature of industrial capital is suggested by the many mines, real estate schemes, and town sites developed and promoted across the province during this era. Although well-known, this is clearly revealed in the 1890s maps and photographs of Sandon, in the “Silvery Slocan,” revealing two railway lines built across rough terrain to serve the city, a well-developed main street, and dozens of mining claims covering nearby mountains. Despite an enormous investment, like many other similar communities, Sandon was mostly “bust” by the interwar years along with the jobs and opportunities for the almost 5,000 residents and 2,000 miners.

British Columbia: A New Historical Atlas, is a significant achievement of research, writing, and publishing. The maps and text work well together and many of the pages, including those for the 1888 design for Victoria’s Beacon Hill Park and the 1898 bird’s-eye view of Vancouver, are beautiful pieces of work. At the same time, as Hayes points out in his introduction, the selection is a personal one. There are relatively few maps from the events of the past hundred years, and this otherwise rich and important collection from the 1880s to the First World War emphasizes railways, mines, and farming over fishing and forestry. Alongside economic development, which is covered well, went the dispossession of Aboriginal peoples and their marginalization and impoverishment — probably the most important geo-political process in British Columbia history. Some of the maps — which show “Indian” reserves as part of developer plans and a court document about the beating and murder of Chinese railway workers — suggest this other history of British Columbia. However, this important story is mostly neglected in the Atlas. Hayes’ emphasis on developers, schemers, and promoters, and on their plans, leaves us wanting to know more about how people experienced the emerging, changing, and imposed town sites, cities, and industrial projects and landscapes.