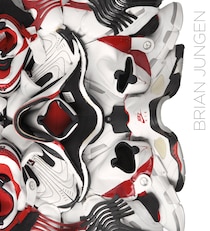 The book provides an overview of the career of the artist Brian Jungen, consisting of essays by Daina Augaitis and four other notable curators — Cuauhtémoc Medina, Ralph Rugoff, Kitty Scott, and Trevor Smith. The text also includes a transcript recording a series of discussions in 2005 between Brian Jungen and British artist Simon Starling, in addition to 373 full-colour images of Jungen’s work.

Without doubt, this monograph will be of use to general readers, students, and academics studying Jungen, an “art star” whose rise is confirmed by winning numerous prestigious prizes and by exhibiting at the National Gallery of Canada, the Smithsonian’s National Museum of the American Indian, and the Tate Modern. Both the critical essays and the interview material help to convey the profound tensions and ambiguities infused in Jungen’s inventive art. The artist cleverly transforms ready-made consumer goods into evocative objects — Nike Air Jordans into Northwest Coast Indigenous masks, IKEA file boxes into birdhouses, plastic serving trays into minimalist sculpture. In the process, Jungen’s hybrid forms reveal the fraught relationship between consumer culture, flows of global capital, and the idolatry of the star system: conflating, for example, the iconic brand of a slam-dunking Michael Jordan and the exploitation of cheap labour in sweatshops abroad. Perhaps more notably, Jungen’s work also throws into high relief the connections between the commodification of art and the fetishization of Indigenous identities, display cultures, and ritual objects.

The monograph is a paperback edition of an earlier hardcover edition published in 2005, which has the unfortunate consequence of preceding two major historical events which have shifted the critical terrain in no small way.

First, the global economic meltdown beginning in 2008 revealed much more pernicious features of globalized capitalism than the fetishistic consumption of material goods — i.e. opaque financial instruments (subprime mortgages, credit default swaps, derivatives) that have since undermined the stability of national economies across the world. In light of massive wealth loss and the subsequent rise in protest movements, critical essays on playful reconfigurations of consumer products seem to offer less of an incisive critique on globalization than they once did.

Second, the authors’ interest in exploring hybrid cultural identities — significantly Jungen was born in Dawson Creek to a Dane-Zaa mother and Swiss father — is complicated by a recent turn in Canada towards a politics of recognition of Indigenous cultures. The Indian Residential School Settlement Agreement in 2007, the official apology by PM Stephen Harper in 2008, and the ongoing investigations of the Truth and Reconciliation Commission of Canada, with varying degrees of sincerity, signal a struggle to understand the scope and consequences of the official subversion of Indigenous cultures. In this new context, the monograph’s occasional applause for cultural hybridity feels somewhat out of step, as the hybridization of culture, especially in a colonial setting, always emerges unevenly. This sense is echoed in recent critical literature concerning cultural hybrids. In fairness to the artist, his notion of hybridity (naturally occurring in plant species) differs in meaning from the cultural hybrids described in several places in the text, underscoring the value of Jungen’s contribution in the discussion section.

At some point in the text it also would have been helpful for one of the curators to substantively explore the role of museums and publications, of which this book is one, in sustaining fetishistic appetite for the consumption of Indigenous artifacts and art. The white cube (those official, sacred spaces of art display and viewing) and art monographs seemingly share some uncanny similarities with Northwest Coast treasure boxes in which the totemic power of ritual objects was traditionally preserved.

One final critique — the design of the book is for the most part effective, though in places images of artworks mentioned in the text were too difficult to find or were not included. Considering the abundance of illustrations, this problem could have been avoided.

Despite these concerns, the text offers valuable formal and critical evaluations of Jungen’s work. In tandem, the contributions of the curators, the discussions between the artist and Simon Starling, and the collection of illustrations provide readers with a solid grounding in Jungen’s practice, both his already iconic Prototypes mask series and his more recent explorations into modern architectural design, shelters for animals, and minimalist sculpture. This monograph should be included in the collection of every academic library.