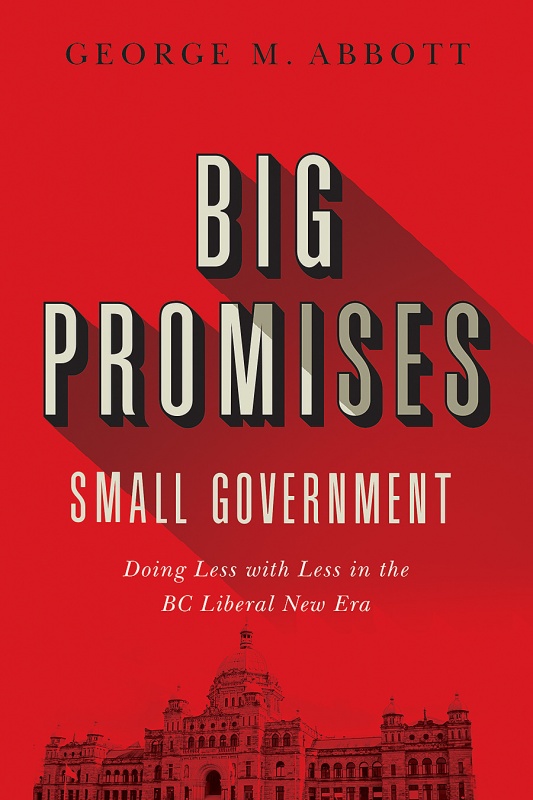 George Abbott was a cabinet minister for twelve years in the BC Liberal governments of Gordon Campbell and Christy Clark.  In Big Promises, Small Government, he reflects on his tenure in the first Campbell government (2001-2005), a tumultuous period in which the province implemented budget and staffing cuts not seen since Bill Bennett’s post-1983 Social Credit government.  The book is based on Abbott’s doctoral thesis in political science, which he completed at the University of Victoria in 2019.  As such, it provides a thoughtful and scholarly analysis of the BC Liberals’ “New Era” first term, focusing on the deep cuts made to personal and corporate income taxes and the devastating effect they had on public programs and services. Unlike the published reflections of most ex-ministers, Abbott writes critically and sometimes scathingly of the government in which he served.

In the 2001 provincial election, the Liberals promised “dramatic tax cuts” that would pay for themselves by stimulating business investment and attracting capital from outside the province.  The gambit failed. Instead, the effect of reducing taxes by $2 billion – most of it the result of a 25% cut in personal income tax — was to nearly double the province’s budget deficit to $4.4 billion in 2002 (195n).  In Abbott’s view, Campbell’s decision to cut taxes so deeply was “ill-timed and ill-conceived” because the province had already entered a period of reduced economic growth and declining government revenues.  Given the government’s avowed intention to balance the budget by 2004-2005, the result was a draconian “self-induced austerity” (178-179).  All ministries, with the exception of health, education, and advanced education, were to reduce their budgets by an average of 35%.  Staff cuts of up to 11,700 — one-third of the civil service — were also announced.  Since the exempt ministries accounted for 70% of overall spending, the brunt of the cuts was to be borne by resource and social service ministries, including Abbott’s own ministry of Community, Aboriginal, and Women’s Services.  There was, he writes, “an inequitable distribution of pain in the BC Liberal New Era” (85).

In addition to meeting onerous budget targets, ministries were also required to undertake “core reviews,” ostensibly to determine what functions they should or should not be carrying out. Inspired by the principles of the New Public Management (NPM) embraced by Margaret Thatcher in the UK and David Lange in New Zealand, Campbell required his ministers to pursue deregulation, devolution, outsourcing of services, public-private partnerships, and the like.  While the Premier exhorted ministry officials to study and emulate NPM policies of other jurisdictions, they had no time for reflection. As one former deputy minister put it, “whole programs were wiped out with very little forethought, other than the urgent need to meet targets, or else” (112).

Abbott adds to previous studies of the Campbell government, such as David Beers’ Liberalized and J.R. Lacharite and Tracy Summerville’s The Campbell Revolution?, by exposing the inner workings of the provincial state as ministers and civil servants struggled to meet the sometimes contradictory demands that were made of them.  He contrasts the successful reorganization of health authorities, carried out by the new Ministry of Health Planning, for which adequate funding and staff was allocated, with the fraught efforts of the Ministry of Children and Family Development to regionalize family services in the face of a 23% budget cut and the loss of ministry staff (57-59).

Separate chapters recount the experience of three social ministries — Human Resources (MHR); Children and Family Development (MCFD); and Community, Aboriginal, and Women’s Services (MCAWS) — and the “cascading effects” wrought by budget cuts across programs and ministries. For example, cuts to child-care funding drove MCAWS to reduce the income threshold for child-care subsidies; as a result, 9,000 families lost their subsidy, forcing some of them to give up child-care spaces.  This policy, combined with a new policy at MHR requiring single mothers on welfare to seek work when their youngest child was three years old (instead of seven), undermined MCFD’s aim of enhancing the capacity of families to care for their children while “exacerbat[ing] the risk of children being taken into care” (140-141). In one of the most arresting passages, Abbott quotes from the 2006 Hughes Report which found that when the office of Children’s Commissioner was abolished and responsibility for reviewing child deaths was transferred to an already over-burdened Coroner’s Office, the deaths of 955 children were not properly reviewed.  To Abbott, this exemplified “an appalling, budget-driven attenuation of services to the province’s most vulnerable children” (176).

Big Promises, Small Government should be of special interest to students of public policy and public administration. But it also deserves a wider readership.  Clearly written and displaying the dry wit for which Abbott was renowned during his years in public life, the book provides an insightful account of the first of Gordon Campbell’s three terms of office, the last of which was cut short in 2011 by the HST imbroglio.  While Abbott’s former cabinet colleagues may be dismayed by his apostasy, BC Liberals would do well to heed his warnings about the consequences of improvident tax policies.