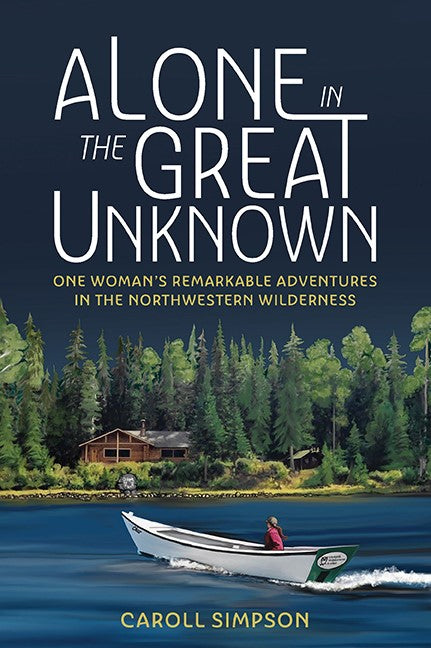 Alone in the Great Unknown: One Woman’s Remarkable Adventures in the Northwestern Wilderness

Caroll Simpson offers a dramatic window into the realities—and mysteries—of life off the grid in north central British Columbia in her non-fiction account, Alone in the Great Unknown.  A former elementary school teacher now living on Vancouver Island, the author mined her personal journals over a ten-year period beginning in 1996, to describe her experiences as sole owner of Ookpike Wilderness Lodge on Babine Lake.  Themes of wilderness survival, female empowerment and environmental activism emerge, her stories being both harrowing and joyful.

The book includes Simpson’s artwork.  Instructive maps underscore her geographical isolation.  The lakeside lodge and five small cabins were surrounded by seven and a half acres of diverse, old-growth forest.  Access was by boat in the summer and in winter by an ice breaker barge and snowshoe trek.  Granisle, population 300, was the nearest settler village.  Twenty members of the Tachet Band travelled seasonally to Old Fort, a First Nation village ten kilometres away by water.

Simpson’s wilderness adventure began after she convinced her carpenter-husband David to sell their “empty-nest” home on Whidbey Island in Washington State. Once settled in the lodge, the couple began preparing the premises for clients.  In October 1996, in the midst of planning, David died of a heart attack, aged 47.  Grief-stricken, the author nonetheless made the decision to stay on at the lodge.

Simpson’s steep learning curve included discovering that the property was surrounded by industrial forest.  She saw the risks of the “monoculture” practice of replacing old growth forest with new plantations of single species trees.  Alex Michelle, a member of the Tachet First Nation, whom Simpson devotes an insightful chapter to, told her: “I have walked these forests all my life. Now I get lost.” (62)

Other northern residents also cared deeply about clear-cutting, some of them speaking out alongside Simpson at meetings with forestry and government officials.  “It was gratifying, early on, to meet like-minded people willing to fight the powers that be to save some of the natural habitats we mutually respected,” Simpson writes. (67) Her years of activism are threaded throughout the book, concluding with an impressive report on policy successes. Given the author’s experiences, a ‘further reading’ list would be an enlightening addition for the reader.

Friends and family visited the lodge in the summer months along with clients, and Simpson relays stories about them all.   She had two dogs and a collection of guns to provide a measure of protection while on her own.  Unwanted house guests included a woodchuck, a pack rat, and martens.   Whether Simpson was walking or driving a vehicle, she had to watch out for grizzles, moose, and cougars.  Storms and extreme weather also provided fodder for hair-raising tales.  Money proved to be another challenge but ever resourceful, Simpson found various jobs near the lodge and, during winter months, in Washington State. Magical moments are also recounted, among them the author’s sighting of three trumpeter swans on the lake. More details of Simpson’s emotional journey (such as grief, loneliness, and recovery) would be illuminating, possibly by way of a sketch or excerpts from her journal.

In 2005, Simpson re-married, the couple remaining at the lodge to 2018.  When the property was bought by members of four bands of the Dakelh (Carrier) Nation, the author experienced one of many ‘full circle’ moments in her life. Simpson has written a compelling story with warmth and compassion, revealing a northerner’s necessary courage and self-reliance and conveying a deep appreciation for British Columbia’s at-risk wilderness.