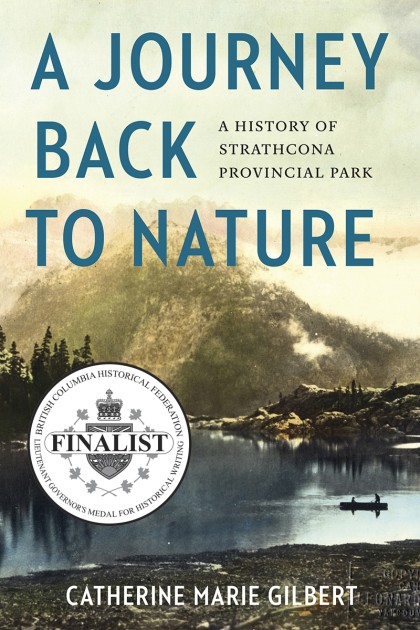 A Journey Back to Nature: A History of Strathcona Provincial Park

Spaces like Strathcona Provincial Park, the oldest provincial park in British Columbia and the largest on Vancouver Island, were created to give settlers a place to escape the pressures of their increasingly urban lifestyles. Catherine Marie Gilbert writes in the preface of A Journey Back to Nature, that those who conceived of Strathcona in 1911 were “looking for a journey back to nature”, a place to return to “the era before the Industrial Revolution” – a rationale Gilbert contends is even more important today (7). This assertion, signalled in the book’s title, is one of the core arguments of the work. Gilbert sees parks as an inherently positive concept and as spaces that deserve and require protection and stewardship by the public, politicians, and dedicated individuals.

The exploration of the personal stories of individuals who fought to protect Strathcona is a strength of this book. In this pursuit, a wide range of documentary sources, interviews and images are used to craft what is an engaging and well-written work. These stories include those of Price Ellison and his expedition of 1910, which set out to determine if Strathcona was a suitable location for a park. That journey was motivated by the success of Rocky Mountains Park (later renamed Banff National Park), established in 1885, which became a hotspot for tourists due to the building of a railway. However, that success came at the expense of Indigenous Peoples, who were expelled and excluded soon after the park’s opening.

Ellison’s expedition resulted in a “glowing” report back to officials in Victoria, and soon after, Strathcona Provincial Park was created with equally little regard paid to the First Nations who had used this land for millennia (64). Gilbert acknowledges this in the introduction and briefly explores Vancouver Island’s long history of human habitation, including some recent and fascinating archaeological finds within the park that highlight the diverse range of uses Indigenous communities had for this land through time. However, this book does not further engage beyond this with the broader literature on parks, reconciliation, and Indigenous Peoples in Canada.

Rather, the focus is very much on the settlers who created, exploited, enjoyed, and worked to protect the park. After initial pre-war efforts to bring tourists to the park failed, the need to safeguard Strathcona from development became more pressing in the 1950s when the BC Power Commission proposed building a dam at Buttle Lake – an area of great natural beauty. An intense battle ensued, with individuals like conservationist Roderick Haig-Brown advocating for the preservation of the park. That battle was eventually lost, and a dam was built, but it was not the last fight over the park’s integrity.

In the 1960s and early 1970s, government decisions allowed for a series of land swaps and developments by mining and logging companies, including the opening of a mine by the Westmin company at Myra Creek. A moratorium on new prospecting was introduced in 1973, but by the mid-1980s, the recommendations of the newly created Wilderness Advisory Committee opened the doors for new development in the park, including a proposed mine by the Cream Silver Company at Cream Lake. The Friends of Strathcona Park (FOSP) was formed to fight this mine, and again Gilbert explores in detail the contribution of individuals like Jim and Myrna Boulding, Marlene Smith, and others to this struggle.  Following a determined protest campaign, the FOSP successfully prevented the opening of new mines, and by 1993 the provincial government launched a new Master Plan for the park that secured its future to the present day.

The Master Plan itself promised to “work with government agencies, regional districts, the public, industry, and private land holders to protect wildlife, recreation and aesthetic values along the park boundaries and control access into the wilderness areas” (189). The exclusion of First Nations from this consultative and cooperative process could have warranted more exploration by Gilbert. While it is briefly noted that some First Nations leaders supported the FOSP in their campaign, there is a lack of more substantive discussion around the lack of Indigenous representation and perspective in decision-making regarding the park’s future.

Nor is there any attempt here, or elsewhere in this work, to critically analyze or question the language used by BC Parks and others to promote and describe Strathcona, some of which the author repeats. Words such as ‘wilderness’, ‘pristine’, ‘untouched’, and ‘primeval’ are used throughout, but these terms have been challenged by environmental historians as cultural constructs that often ignore the roles and history of Indigenous Peoples. There could have been a deeper engagement with this wider literature on concepts of nature and the motivations and ideals behind the Western conservationist movement itself.

Overall, this is an articulate and well-researched book, which emphasizes the need for environmental stewardship and watchfulness. The author’s own admiration and respect for those who fought to preserve Strathcona is also very clear and inspirational. The main flaw lies in the lack of engagement with wider debates and discussions over the concept of parks, the language we use to describe them, and the role of Indigenous Peoples in the past and future. This is a shame, as these elements would have added another interesting dimension to an already valuable book.

Gilbert, Catherine Marie. A Journey Back to Nature: A History of Strathcona Provincial Park. Victoria, BC: Heritage House Publishing, 2021. 256 pp. $26.95.