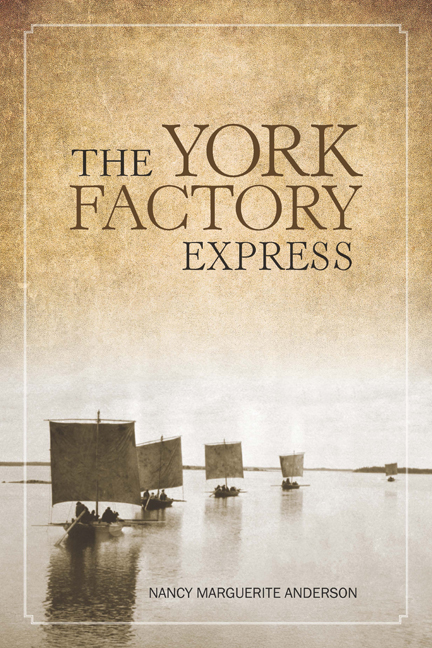 The York Factory Express was an integral part of the Hudson’s Bay Company’s trans-continental trade network in the nineteenth century.  It carried men and mail from the Pacific coast to Hudson Bay, linking the Columbia and New Caledonia districts with the company’s operations east of the Rockies, and ultimately with the board of directors in England.  Nancy Anderson uses the handful of journals kept by the men who led the express to give us a detailed appreciation of the scale and significance of this arduous annual journey.

Anderson is a descendent of fur traders, and her sense of personal connection with the express crews is clear.  Her prologue tends to romanticise their lives somewhat, repeating well-worn tropes about happy and carefree voyageurs.  However, once she begins working closely with the surviving journals – of which there are only seven – the book really gains traction.  Her detailed exposition illuminates the daily grind involved in crossing the vast distances over which the HBC’s operations stretched.

Part of the value of this book is in laying bare the magnitude of the challenge faced by the HBC during this period.  It had to manage inventory, information, and personnel across thousands of kilometres without the benefit of telegraph, steam travel, or any other ‘modern’ modes of travel and communication.  Studies of how firms like the HBC grappled with such challenges have been a major part of the history of modern business enterprise.

However, Anderson goes deeper than this, showing us how these big logistical issues of trans-continental enterprise played out on a very local and personal level.  The rivers and landscapes through which the York Factory Express travelled are almost as much characters in her story-telling as the human crews.  This is aided by the liberal use of maps, eleven in all.  The index is not as comprehensive as one might like, but Anderson’s narrative provides useful signposts by following the express geographically:  as another epic tale phrased it, there and back again.

The tale Anderson tells is epic indeed.  If she is sometimes guilty of romanticising the fur trade or of over-simplifying some of the broader contexts, she never loses sight of the people who made these journeys.  Therein lies both the charm and the value of this book, sympathetic story-telling grounded in primary documents, liberally quoted to keep the reader as close as possible to the words and experiences of those who worked and travelled the York Factory Express.