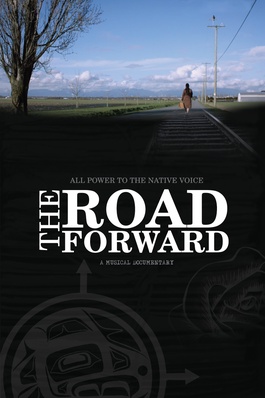 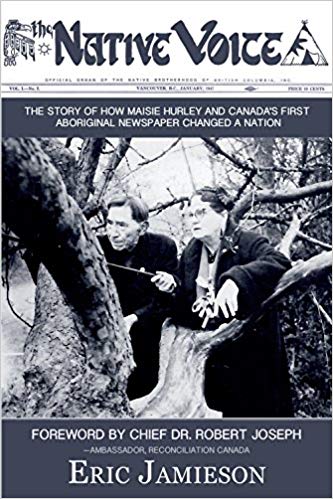 Update June 2020: The National Film Board of Canada (NFB) is proud to present the online release (free, accessible worldwide & in perpetuity) of The Road Forward on nfb.ca

The Native Voice and The Road Forward provide unique, though very different, glimpses at historic examples of Indigenous activism in Canada and BC.

The Road Forward marks what may be a defining moment in Indigenous documentary film making, combining both beautiful artistry and contemporary storytelling with a powerful message of rebirth and resistance. The Native Voice, on the other hand, represents a compendium – almost 20 years’ worth – of excerpts and stories from an alternative press, constructed around the story of a non-Indigenous first-generation immigrant, Masie Hurley. While the rich artistry of the film differs markedly from the fastidious, almost regimented, storytelling of author Eric Jamieson, both make an import contribution to the historic record of Indigenous resistance in Canada and British Columbia.

In The Road Forward, Marie Clements combines the musicality of a film like Hair (1979) with a narrative that speaks to both resilience and rebirth in the trajectory towards an Indigenous cultural resurgence in Canada. Beautifully portrayed and performed by a cast of First Nations and Métis actors, this pastiche of storytelling combines music and history with a strong sense of contemporary resilience, set against a poignant backdrop that includes residential schools and the Highway of Tears. The music is enthralling and the acting both genuine and sincere. It’s hard to imagine the script for this film, as it moves seamlessly between song, a form of soliloquy, and storytelling. Focused on the struggles of First Nations leaders during the period following the imposition of colonial rule in British Columbia, the film advances a narrative that is both heart-wrenching and informative. It is in its historical storytelling that it intersects with Jamieson’s text, which focuses on the The Native Voice newspaper.

The Native Voice was a BC-based newspaper that operated from the mid-1940s well into the 1960s, spearheaded by Masie Hurley. While she also figures briefly in The Road Forward (smoking a cigar, no less), the thematic focus of Jamieson’s book is the struggle of First Nations leadership in British Columbia – from Alfred Adams to George Manual – as seen through the lens of this publication. While there are some references to other historical and academic sources, the author weaves together several hundred excerpts from the newspaper to tell a rich story about the First Nations struggle to be recognized in British Columbia – from the inception of the “land question” to the basic right to consume alcohol without being harassed by authorities. One learns here, for example, about Thomas Berger – who also features in The Road Forward and was the protégé of Masie Hurley’s last husband, Thomas Hurley – who set the stage for the litigation of Indigenous land rights in the modern period (see R. v. White and Bob, 1964).

As the book focuses heavily on the story of Maisie Hurley herself, the contemporary reader cannot help but feel self-conscious about the fact that, yet again, here we are making sense of the “Other” from the standpoint of a presumably more identifiable “white” character. No doubt Jamieson was aware of this likely criticism, but pursued his focus given the very unconventional tendencies of his protagonist. While the introduction of Hurley’s background in the first chapter is interesting from a historical perspective, it does not grab the reader in the way that an otherwise constructed narrative about First Nations might. Nonetheless, the emergent picture of this woman’s indomitable spirit soon makes it clear why she is the central focus of the book – due to her significant role in the First Nations struggle for recognition in BC.

The Native Voice reminds us of the central role that newspapers played prior to the Internet, when finding ways to be heard or seen was a particular challenge for marginalized or otherwise dispossessed peoples. Masie Hurley, an unlikely hero, took up this challenge in a period when “whites” helping “Indians” was relatively unusual. Jamieson’s compelling re-enactment demonstrates the critical role that such characters can play in shaping the future. The fact that Masie was inducted as a member of several First Nations is evidence of her role in supporting the surfacing of Aboriginal rights in Canada; not as a main character, but precisely because her cause and conviction were not self-aggrandizing. She is an example of a woman – in a period where overt sexism was more the norm than the exception – who challenged the status quo, confronted mainstream racism, and commanded the respect of leaders and others who might have preferred to do otherwise. It is curious, however, that Jamieson does not explore gender as an issue, weakening the overall contribution that this text could have made.

Where The Native Voice recounts a history of a remarkable woman who worked on behalf of First Nations in British Columbia at a time when the Indian Act’s most repressive policies were under review, The Road Forward picks up on this path and drives it clearly and eloquently into the present. Overall, both of these works make a meaningful contribution to our understanding of the Indigenous landscape in the present day, but The Road Forward does so with greater artistry and, perhaps, in a spirit that more profoundly celebrates the Indigenous contribution to the Canadian mosaic on the whole.