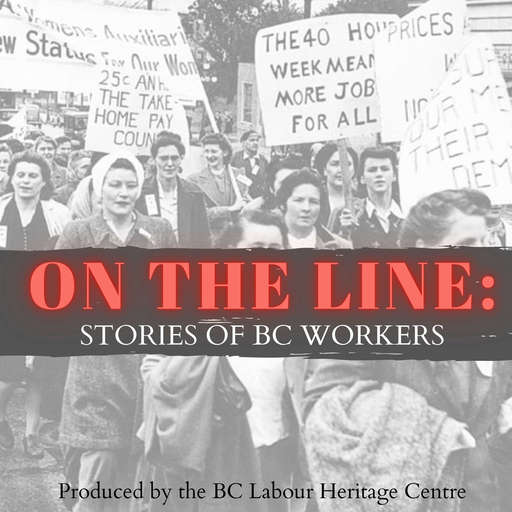 On the Line: Stories of BC Workers Podcast

By Rod Mickelburgh and the BC Labour Heritage Centre

In September 2020, the BC Labour Heritage Centre released the first episode of its podcast, On the Line: Stories of BC Workers. To date, the series includes 17 episodes of roughly fifteen to thirty minutes in length, each exploring a different event or theme in the province’s labour history, and focusing mainly- but not exclusively- on labour disputes, strikes, and significant but lesser known labour leaders from British Columbia’s distant and recent past.

The episodes are well produced, combining narration with sound clips, oral history interviews, conversations with authors and historians, and music in an entertaining and educational way that certainly accomplishes the goal – “to shine a light on Be’s rich labour heritage.” Making excellent use of the BC Labour Heritage Centre’s collections and resources, episodes are informative without being pedantic, and each episode includes a list of archives and books consulted and credits for music, audio, and video clips. The host, author and former journalist Rod Mickleburgh, does much of the research and script writing with Patricia Wejr, and the pod cast’s title mirrors that of Mickleburgh’s 2018 book, On the Line: A History of the British Columbia Labour Movement. Bailey Gordon, project manager at the BC Labour Heritage Centre, is also credited for several episodes and guest hosted episode 6 (“AUCE Achieves Full Maternity Benefits, 1974”) in honour of Women’s History Month.

The ‘usual suspects’ of labour history are well represented here; several episodes highlight working lives and workers’ conflicts in mining towns, while two are set against the conditions of the Great Depression. As the title of the podcast suggests, many episodes focus on specific unions, workplaces, and strikes, from the coal miners’ strike on Vancouver Island in 1912 to the Tranquille Occupation that began Operation Solidarity in 1983.

More unexpected are episodes that highlight lesser known battles, victories, and themes in Be’s labour history. For example, episodes on the 1921 New Westminster teachers’ strike and the fight for maternity benefits among faculty at UBC in 1974 draw attention to women’s role in union activity across the twentieth century. The history and ongoing legacy of hazardous materials in the workplace come to light in episodes recounting Bea Zucco’s campaign to obtain a pension for her husband – sick with silicosis – and equally in an episode that examines asbestos. Episodes focused specifically on racialized workers – such as Chinese immigrant farmers in Armstrong, Black sleeping car porters, and Indigenous longshoremen on the Vancouver waterfront- balance historical context about their discriminatory treatment with stories that demonstrate how their work was central to their identities. The rich use of oral histories, and interviews with workers’ descendants and community members, transform what would be a more standard historical narrative into accounts that demonstrate workers’ dignity and resilience in often difficult circumstances.

As it stands, On the Line will appeal to anyone interested in British Columbia’s history and labour heritage. The engaging presentation and length of each episode makes the podcast a valuable resource for those teaching history or social studies. While the time between episodes has lengthened of late, one hopes that Mickleburgh and his collaborators will continue to bring the stories and voices of BC workers to a listening audience.

Mickelburgh, Rod and the BC Labour Heritage Centre. On the Line: Stories of BC Workers Podcast. Podcast. https://player.fm/series/on-the-line-stories-of-bc-workers, 2020.