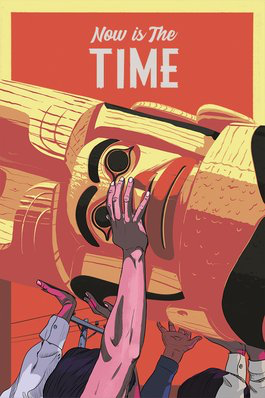 Now Is the Time

In the extraordinary short film Now Is the Time, Haida filmmaker Christopher Auchter brings to the screen a moving story of renewal through the restoration and re-editing of footage from the National Film Board of Canada (NFB) film This Was the Time (1970), documenting the first raising of a totem pole in the village of Old Massett on Haida Gwaii in over one hundred years. On the fiftieth anniversary of this monumental event, internationally renowned Haida artist Robert Davidson, who carved the pole when he was only twenty-two years old, reflects on the profound impact that this event had on Elders and community members, sparking a resurgence in Haida artistic and ceremonial practice that remains vibrant and strong today. This film is a remix of restored archival footage alongside interviews with Robert Davidson and his brother, Reg Davidson, who assisted in the carving of the pole, as well as animation sequences which cleverly represent ancestral spirits looking down upon with approval as Robert Davidson carves in his studio.

The film includes a beautiful restoration of the 35 mm and 16 mm film footage that was digitally transferred to 4K resolution. The result is a pristine and crisp film that lends rich detail to the meticulous carving process and the ceremonial activities surrounding the pole raising. As Auchter notes: “When they digitized it into 4K, it just looked beautiful. Some of it looks like it was shot yesterday – only the clothing, the vehicles, and some of the styles give it away” (Auchter in Mullen 2019).  I see the film as an act of recuperation in several ways. First, by re-editing the film footage from This Was the Time, Auchter reclaims this footage made by Eugene Boyko, a settler Canadian director, and his edit speaks to Haida self-determination and sovereignty. In this way his re-engagement of the archive unsettles dominant narratives often held in national archives that render Indigenous perspectives invisible. Now Is the Time fits neatly alongside an emerging genre of Indigenous films, such as Mobilize (2015), Three Thousand (2017), and Caribou in the Archive (2019), that contest and remix national and provincial moving image archives to assert visual sovereignty and recuperate Indigenous histories and cultural memory.

Now Is the Time also functions as a recuperative act through Auchter’s inclusion of footage shot by Haida filmmaker Barbara Wilson alongside a present-day interview with her about what it was like to film at and to witness this momentous day. This is especially significant in the landscape of Indigenous film history in Canada because Barbara Wilson was a member of the first cohort of Indigenous filmmakers to be trained under the NFB’s “Indian Film Crew” program from 1968 to 1970.  The NFB supported the training of a second cohort of Indigenous filmmakers from 1971 to 1973 (Stewart 2007, 57).  Barbara Wilson was the only woman in either cohort of these programs, and her role in this critical turn in Indigenous film history has often been elided by her male counterparts who directed and produced films emblematic of these programs, such as The Ballad of Crowfoot (1968) and You Are on Indian Land (1969).  Now Is the Time not only recognizes the impact of her film and cultural work on Haida Gwaii but also re-centres her more broadly within the history of Indigenous cinema in Canada.

Now Is the Time is a powerful representation by a Haida filmmaker for his Haida community, made in tribute to a Haida master artist, Robert Davidson, and to Barbara Wilson, who opened so many doors for other Indigenous filmmakers. The film also explores the far-reaching and insidious impact of oppressive and assimilative policies under the Indian Act, which rendered the potlatch illegal from 1884 to 1951, punishable by fines and imprisonment. In the film we hear Haida Elders recall the pressures from missionaries and Indian agents to burn or give away their regalia and treasured belongings. Robert Davidson recalls having to visit museum collections to see Haida belongings of carved masks and totem poles because there were not many remaining within his community.  The film reveals what was left in the wake of this racist set of settler-colonial policies that facilitated and sanctioned the removal of culturally and ceremonially significant belongings, which often ended up in museum collections. In one of the most poignant moments in the film Robert Davidson tears up recalling that the Elders in his village did not have their regalia to wear to the totem pole raising ceremony because of these extractive and repressive policies. But the spirit of his Elders could not be tamped down, and they showed up for the pole raising with their own headpieces made from cardboard, painted with the clan and crest designs that they would have had on their woven and carved regalia.

What did it mean to carve and raise a totem pole in Old Massett on Haida Gwaii in 1969? What we see in the film is that it was a monumental effort by Robert and Reg Davidson, with the support of their whole community, and that it stood as a defiant visual marker of resistance and self-determination. This moment became a spark that rippled out to inspire renewal and innovations within Northwest Coast artistic practices not only within the Haida Nation but also among other First Nations on the West Coast. Christopher Auchter renders a cinematic tribute to the incredible force of Indigenous resilience and resurgence, a testimony to those who held on even in the depths of the darkest times to carry their customary practices forward. I encourage everyone to watch this film, to include it in your classrooms, film festivals, and community screenings. It should be required viewing for all.  It is also a reminder for us now, in the midst of the dark and troubling times of a pandemic raging with its own inequalities, to challenge the systems of inequality, to persist, to fight, and to hold on for better days ahead.

Mullen, Pat. 2019. “Now Is the Time for the Haida Renaissance: An Interview with Christopher Auchter.” Point of View Magazine, 29 September 2019. http://povmagazine.com/articles/view/now-is-the-time-for-the-haida-renaissance-an-interview-with-christopher-auc.

Stewart, Michelle. 2007. “The Indian Film Crews of Challenge for Change: Representation and the State”. Canadian Journal of Film Studies 16, no. 2 49–81.

Caribou in the Archive. 2019. 8 mins. Director: Jennifer Dysart. National Film Board of Canada.

Now Is the Time. 2019. 16 mins. Director: Christopher Auchter. National Film Board of Canada.

The Ballad of Crowfoot. 1968. 10 mins. Director: Willie Dunn. National Film Board of Canada.

You Are on Indian Land. 1969. 36 mins. Director: Michael Kanentakeron Mitchell. National Film Board of Canada.