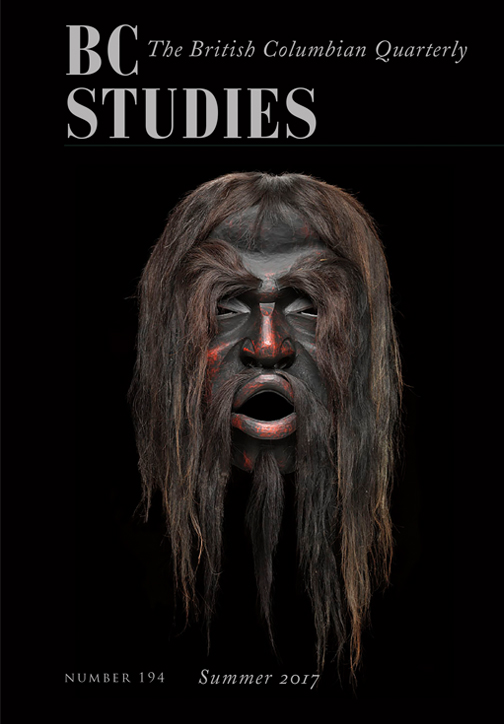 Features SOUNDWORK by Hildegard Westerkamp; Susan Lambert’s REFLECTION on the BCTF’s struggle against the BC Liberal government; A REVIEW ESSAY by Wendy Wickwire; ARTICLES by Nicolas Graham, George Abbott, Roger Sugden and Keith Sugden, Margaret Scaia, and J.I. Little; NEW MEDIA REVIEWS; A report on Indigenous Communities and Industrial Camps for THIS SPACE HERE and a tribute to cover artist Beau Dick by Francis Dick (THE FRONT).

By The Firelight Group with Lake Babine Nation and Nak'azdli Whut'en

Economic Development of the BC Interior: A Case Study of Occupations in the Okanagan, 1881-1921

By Roger Sugden and Keith Sugden

Becoming a Nurse in Vancouver and Calgary: Women, Work, Motherhood, 1958 to 1976

The Natural Complexities of Environmental Listening: One Soundwalk – Multiple Responses, by Hildegard Westerkamp

The Quest for the “Real” Franz Boas

Great Fortune Dream: The Struggles and Triumphs of Chinese Settlers in Canada, 1858-1966

Through an Unknown Country: The Jarvis-Hanington Winter Expedition through the Northern Rockies, 1874-1875

What We Learned: Two Generations Reflect on Tsimshian Education and the Day Schools.

Solitudes of the Workplace: Women in Universities

Rebel Life: The Life and Times of Robert Gosden

Human Rights in Canada: A History

The Sea Wolves: Living Wild in the Great Bear Rainforest

Playing for Change: The Continuing Struggle for Sport and Recreation

BC Studies no. 194 Summer 2017 | Bibliography of British Columbia

George Abbott is a doctoral candidate in Political Science at the University of Victoria. He has previously published in BC Studies on “Duff Pattullo and the Coalition Controversy of 1941” (Summer 1994), “Pattullo, the Press, and the Dominion-Provincial Conference of 1941” (Autumn 1996), and more recently on the introduction of the Harmonized Sales Tax in British Columbia and Ontario (Summer 2015). He was a provincial cabinet minister from 2001 to 2012 including Community, Aboriginal and Women’s Services (2001-05) and Aboriginal Relations and Reconciliation (2009-10).

Erika Balcombe is a faculty member at the Wilson School of Design at Kwantlen Polytechnic University and a current graduate student at UBC (anthropology). Her research aims to bridge these disciplines, anthropology and design, by considering the aesthetic experience of built spaces, namely the staged atmospheres of museum and art exhibitions. Her most recent project was the online exhibit On These Shores (2016), developed for the Jewish Museum and Archives of BC (JMABC). The exhibit traces the migration of settler Jews to Victoria, BC in the 1800s using materials from the JMABC’s archival records.

Francis Dick is a contemporary aboriginal artist and a member of the Kwakwaka’wakw Nation. She began her career as a social worker after receiving her degree from the University of Victoria, but quickly realized that her true calling in life was to honour her natural artistic talents. Francis is an integral member of the native art community, and is frequently requested to speak for various community organizations, women’s groups and university classes. Francis’s native art has been exhibited in various art galleries and museums, including a permanent exhibit at the Ethnological Museum in Berlin. Her aboriginal paintings, as well as articles and interviews, have been published in books, calendars and magazines all over North America, Asia and Europe.

Ginger Gibson is a Director of the Firelight Group. She has negotiated many
Impact and Benefit Agreements (IBAs), and is constantly involved in the implementation challenges that arise for nations, including many IBAs in the NWT. Her work in socio-economic research and gender impact assessment is published. She is the co-author of the IBA Com- munity Toolkit for Negotiation of Impact and Benefit Agreements. As a Trudeau Scholar, she completed a PhD in Mining Engineering at the University of British Columbia and is now an Adjunct Professor there.
Nicolas Graham is a doctoral candidate in the Department of Sociology at the University of Victoria. His previous work in the areas of critical political economy and political ecology has appeared in Antipode and Capitalism
Nature Socialism. He is currently conducting research on the relationship between fossil fuels and capitalist development and on the power of Canada’s carbon extractive industry.

Dara Kelly is a Post-Doctoral Research Fellow at the Peter B. Gustavson School of Business, University of Victoria. Dara’s doctoral research entitled, “‘Feed the people and you will never go hungry’: Illuminating Coast Salish Economy of Affection” explores Coast Salish philosophy of freedom, unfreedom, wealth and reciprocity and how that shapes Coast Salish philosophy of economy. Dara will graduate with a Doctor of Philosophy in Commerce in September 2017, and completed a Master of Commerce in the Department of Management at the University of Auckland Business School in Aotearoa-New Zealand. She completed a Bachelor of Arts in First Nations Studies at the University of British Columbia.

Susan Lambert graduated from Simon Fraser’s teacher training program in the spring of 1973. After eleven years and the birth of her two sons, she moved to Vancouver in 1984 and started a four-year term position with the British Columbia Teachers’ Federation. In 1989 she became a teacher-librarian in the Burnaby School District. In 2002 she was elected as vice-president of the Burnaby Teachers’ Association, a full- time union position. From there she was elected second vice-president of the British Columbia Teachers’ Federation in 2004 and eventually served as president from 2010 to 2013. Susan is now fully retired.

Jack Little is a Professor Emeritus in the Simon Fraser University History Department. Forthcoming with University of Toronto Press is his Fashioning the Canadian Landscape: Essays on Travel Writing, Tourism, and National Identity in the Pre-automobile Era.

Margaret Scaia is an Assistant Professor (LT) at the University of Victoria in the School of Nursing. She obtained an interdisciplinary PhD in History, Women’s Studies and Nursing in 2013. Dr. Scaia teaches in graduate and undergraduate programs with a focus on the social and political location of nursing in western Canada in the mid-twentieth century.

Keith Sugden (PhD History, MSc Applied Chemistry) is an Affiliated Researcher at the Cambridge Group for the History of Population and Social Structure, University of Cambridge, England. After a career in research and development in a worldwide consumer goods company, he has changed tack to study economic history, particularly as it relates to occupations. He is interested in what people did, why they did it, and what were the outcomes. His main concerns are twofold: to throw light on the English textile industry during the Industrial Revolution, circa 1700-1851, and to understand the economic development of the Okanagan, British Columbia, 1881-present day.

Roger Sugden (BA Law, Sheffield University; MA and PhD Eco- nomics, Warwick University) is Professor and Dean at UBC’s Faculty of Management, and advisor on regional economic development to the Principal of UBC’s Okanagan campus. He has previously worked at the universities of Birmingham, Edinburgh and Stirling, and the Wissen- schaftszentrum, Berlin, and has been Visiting Professor at the Università di Ferrara. His research is on economic organization, the interests of publics and regional socio-economic development. He is currently working on the recent history of occupational structure and economic strategy in non-metropolitan regions, and on organizing knowledge to support BC’s wine industry.

Hildegard Westerkamp has lectured on topics of listening, en- vironmental sound and acoustic ecology and has conducted soundscape workshops internationally. Her compositional work focuses on the sounds of the environment and most importantly, draws attention to the act of listening itself. Her written work has been published in journals and books such as Oganized Sound, Radio Rethink, Kunstforum, Musicworks, MusikTexte, Sounding Art, Sound by Artists, The Book of Music and Nature, and Utopia of Sound. A founding member of the World Forum for Acoustic Ecology and long-time co-editor of its journal Soundscape, Westerkamp was a researcher for R. Murray Schafer’s World Soundscape Project in the seventies, and has taught acoustic communication at Simon Fraser University with colleague Barry Truax.

Wendy Wickwire is an emeritus professor in the Department of History, University of Victoria.