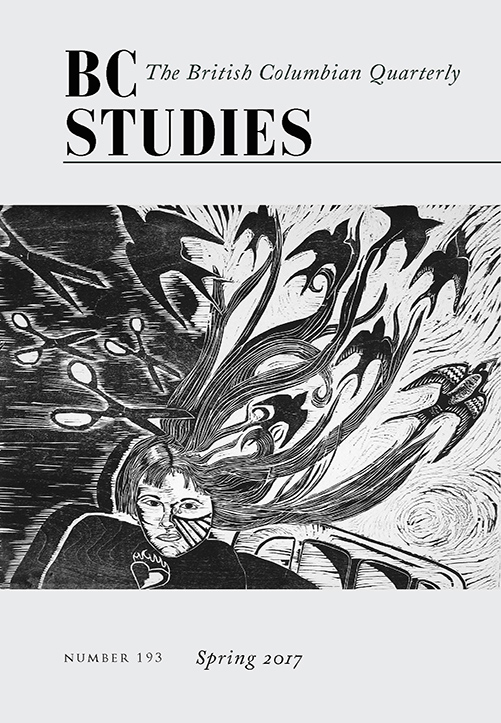 "Free Your Mind," from the Crazymaking Series, 2007

Trading in My White Person’s Gaze

The Legacy and Future of the Buffalo People

From “Knife Men” to “Streamlining with Curves”: Structure, Skill, and Gender in British Columbia’s Meat-Packing Industry

Let’s Talk About Schools: Educational Policy-Making in British Columbia in the 1970s and 1980s

Donald Fraser, the London Times, and the Gold Rushes of British Columbia

Living on “Scenery and Fresh Air”: Land-Use Planning and Environmental Regulation in the Gulf Islands

The Listener: Remembering The Dane-zaa Soundscape Recordings of Howard Broomfield, by Robin and Jillian Ridington

By Robin and Jillian Ridington

Reflections on Anthropology at the University of British Columbia

Working Mothers and the Childcare Dilemma

Local Self-Government and the Right to the City

The Business of Power: Hydroelectricity in Southeastern British Columbia, 1897-1997

The Salish Sea: Jewel of the Pacific Northwest

The Life and Art of Jack Akroyd

In the Spirit of the Ancestors: Contemporary Northwest Coast Art at the Burke Museum

Listening for the Heartbeat of Being: The Arts of Robert Bringhurst

A Taste of Haida Gwaii: Food Gathering and Feasting at the Edge of the World

They Called Me Number One: Secrets and Survival at an Indian Residential School

BC Studies no. 193 Spring 2017 | Bibliography of British Columbia

Sarah King is a white settler who grew up on Treaty 7 territory. A recent graduate of the First Nations and Indigenous Studies and Political Science programs at the University of British Columbia, she now works as a Research Assistant with the Indian Residential School History and Dialogue Centre. Her paper examining settler legal nar- ratives of Pacific Spirit Regional Park, “Aesthetic Alibis for Conquest,” was runner-up for the 2015 RAVEN Trust Young Scholars Essay Prize, and she previously served as Managing Editor for the undergraduate Journal of Political Studies.

Tim Paulson is a doctoral candidate at the University of California, Santa Barbara. His research on the British Columbia meat processing industry began in 2009 with an undergraduate honours thesis project in History at the University of Victoria.
Ian Pooley is an Okanagan historian. He is interested in Okanagan economic and social history. His previous publication in BC Studies was on the arrival of the Canadian National Railway in the Okanagan. He is currently preparing a study of women orchardists’ diaries.

Jillian Ridington began working with Robin Ridington on Dane-zaa ethnography in 1978. They have collaborated on three books, including Where Happiness Dwells: A History of the Dane-zaa First Nations. Their other collaborations include two video documentaries and numerous audio pieces, and the Ridington/Dane-zaa audio and visual archive. Jillian and Robin have also completed an extensive genealogy of the Doig River Dane-zaa, the results of which are now being used in their Treaty Land Entitlement negotiations. Jillian has also done extensive research and writing on women’s issues, focusing on violence against women and women with disabilities, and has edited manuscripts and newsletters for many years.

Robin Ridington, professor emeritus Anthropology, UBC, has worked with the Dane-zaa First Nations since 1964. In addition to four books about the Dane-zaa (two in collaboration with Jillian Ridington), and a book about the Sacred Pole of the Omaha Tribe (a finalist for the 1998 Victor Turner Prize), he has written numerous scholarly articles on topics that include cultural ecology, anthropological poetics, First Nations literature and the cultures of northern hunting peoples.

Kenton Storey is a historian with expertise in the study of Canada and the British Empire. His recent book with UBC Press, Settler Anxiety at the Outposts of Empire (2016), explores public attitudes towards Aboriginal title and the threat of Indigenous violence in colonial Vancouver Island and New Zealand. Storey is employed as a freelance researcher in the field of First Nations history and has authored reports on the history of First Nations in the Treaty 4 and 6 districts alongside contributing historical research for the Truth and Reconciliation Commission.

Jon Weller is a doctoral student in the Faculty of Environmental Design at the University of Calgary. He completed his master’s degree at UVic in History where he looked at the history of land use on the southern Gulf Islands. His current research examines the role of cultural heritage in contemporary land-use frameworks.

Robert Whiteley is an Assistant Professor in the Department of Education at UBC Okanagan. Dr. Whiteley researches from a critical theoretical perspective and writes in the field of educational leadership, the politics of education and educational policy-making. He has written on assessment, accountability and educational governance and is currently investigating the future of rural schools in British Columbia.