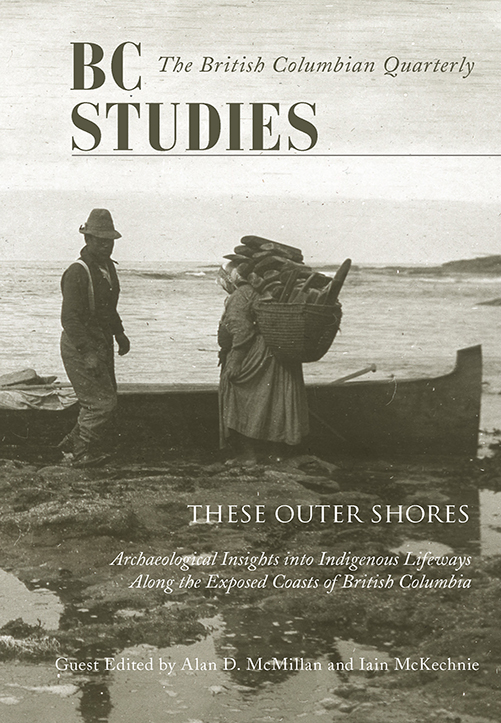 These Outer Shores: Archaeological Insights into Indigenous Lifeways Along the Exposed Coasts of British Columbia

Guest Edited by Alan D. McMillan and Iain McKechnie, These Outer Shores presents recent archaeological research along the outer coast, from southeast Alaska to the entrance to Juan de Fuca Strait. The authors challenge the long-held perception of the western edge of British Columbia as “peripheral” or “remote,” removed from major cultural developments emanating from more interior locations. Instead, recent fieldwork and analyses document a lengthy and persistent occupation of the outer shores over the past 13,000 years. Using a variety of modern approaches and techniques, the authors examine such topics as changing sea levels, human settlement history, fish and shellfish harvesting, whaling, and the integration of Indigenous oral history with archaeology.

Whales and Whalers in Nuu-chah-nulth Archaeology

Prerogatives, Sea Level, and the Strength of Persistent Places: Archaeological Evidence for Long-Term Occupation of the Central Coast of British Columbia 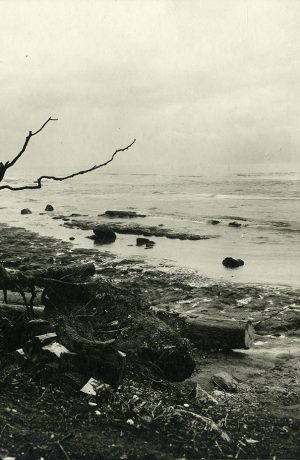 By Erik A. Moore, Rebecca Toov

Kenneth M. Ames, an archaeologist, is professor emeritus of Anthropology, Portland State University, and a past-president of the Society for American Archaeology. He is senior author, with Herbert Maschner, of Peoples of the Northwest Coast; Their Archaeology and Prehistory (1999), co- editor with Elizabeth Sobel and Ann T. Gahr of Household Archaeology on the Northwest Coast (2006) and Chinookan Peoples of the Lower Columbia River (2013) with Robert Boyd and Tony Johnson. He has published in American Antiquity, Antiquity, Canadian Journal of Archaeology, Journal of Archaeological Science, Evolutionary Anthropology, and Journal of Field Archaeology among other venues.

David J.W. Archer is an instructor at Northwest Community College in Prince Rupert. His archaeological work focuses primarily on the north coast of British Columbia and he was recently involved in a detailed documentation of archaeological remains on Lucy Island, near Prince Rupert, which resulted in the 2013 multi-authored publication “Ancient DNA Analysis of Mid-Holocene Individuals from the Northwest Coast of North America reveals Different Evolutionary Paths for Mitogenomes.” (PLOS ONE, Vol 8, Issue 7).

Thomas Brown is a graduate student at Portland State University. His MA thesis, titled “Demography and the Evolution of Logistic Organization on the Northern Northwest Coast between 11,000 and 5,000 CAL BP,” will be completed in the fall of 2015.

Daryl Fedje holds a half-time limited term position with the University of Victoria funded through the Tula Foundation. He joined UVic following a 30-year career as an archaeologist working for Parks Canada in western Canada, primarily in the national parks on British Columbia’s west coast, and particularly on the early period of Haida Gwaii. His research interests continue to be focused on Quaternary paleoecology and the early human history of the Northwest Coast through his work with the Hakai Institute.

Gitla (Elroy White) has twenty years of experience in archaeology and over thirty years of extensive cultural historical knowledge of the central coast largely based upon potlatching as a singer/dancer/orator. He also holds a masters’ degree in archaeology from Simon Fraser University and is currently the proprietor of Central Coast Archaeology, a consulting company based in Bella Bella.

David R. Huelsbeck is professor of anthropology and dean of Social Sciences at Pacific Lutheran University. He received his MA and PhD in Anthropology at Washington State University. His research examines the frequency and distribution of faunal remains from different species and different cuts within a species to answer questions about socio- economic status and social relations among people in prehistoric and historic contexts. His work ranges from pre-contact Northwest Coast to Gold Rush and post-Gold Rush sites in Skagway, Alaska, and to pre-contact Native American and historic logging and mining sites in the Washington Cascades.

Bryn Letham is a PhD candidate at ubc. His current research is in and around Prince Rupert Harbour. He also does research with col- leagues from the University of Toronto on the Sunshine Coast of British Columbia and in Jordan.

Susan Marsden settled on the Skeena River in 1972 after living in eastern Canada, Europe, and Mexico. Since then she has worked for the people of the region as a teacher, researcher, writer, designer, and curator, and is a member of the House of Gunuu in Gitanyow. Marsden spearheaded the development of the new Museum of Northern British Columbia in Prince Rupert and is currently its Director/Curator. Her publications include numerous articles and books on the ancient history of the Tsimshian and Gitksan First Nations.

Andrew Martindale is an associate professor in the Department of Anthropology at UBC. His research focuses on the history of Indigenous Peoples of the Northwest Coast of North America, specifically that of Tsimshian and Musqueam communities. His work explores the archaeology and ethnohistory of cultural contact and colonialism, space- syntax analysis of architecture and households, the use of Indigenous oral records in archaeology, and the role and interpretation of archaeological data in Canadian jurisprudence, especially its implications for Aboriginal rights and titles. He is the Director of the Canadian Archaeological Radiocarbon Database.

Alan D. McMillan is an adjunct professor in Archaeology at Simon Fraser University and faculty emeritus in Anthropology at Douglas College. He holds a PhD in Archaeology from Simon Fraser. His publications include Since the Time of the Transformers: The Ancient Heritage of the Nuu-chah-nulth, Ditidaht, and Makah (UBC Press, 1999) and First Peoples in Canada (with Eldon Yellowhorn; Douglas & McIntyre, 2004), as well as several monographs and numerous articles. His archaeological and ethnographic research, which spans more than four decades, has particularly focused on the Nuu-chah-nulth peoples of western Vancouver Island.

Charles Menzies, a member of Gitxaała Nation, was born and raised in Prince Rupert. His primary research interests are the production of anthropological films, natural resource management, political economy, contemporary First Nations’ issues, maritime anthropology, and Indigenous archaeology. He is also special advisor on cultural and heritage research for Gitxaała Nation and a professor in the Department of Anthropology at UBC.

Madonna L. Moss is a professor in the Department of Anthropology at the University of Oregon. As an archaeologist, she studies the long- term history of the First Nations and Alaska Natives of the Northwest Coast of North America, particularly Tlingit and Haida. Recent books include Northwest Coast: Archaeology as Deep History, published by the Society for American Archaeology, and The Archaeology of North Pacific Fisheries, co-edited with Aubrey Cannon. She has also studied how Indigenous groups have used marine mammals, birds, and invertebrates. Her zooarchaeological research recognizes that animals are important to Indigenous People not only as “resources,” but as components of cultural identity and heritage.

Farid Rahemtulla is an assistant professor in the Department of Anthropology at the University of Northern British Columbia. His research projects focus on deep-time Aboriginal history on the central coast and in the Babine Lake area of British Columbia.

Gary Wessen has a PhD in anthropology from Washington State University and has been involved in archaeological research in western Washington for more than forty years. He has been the Makah Cultural and Research Center’s archaeologist since that institution opened in 1979 and also operates an archaeological consulting company which specializes in the coastal and lowland forest settings of the Olympic Peninsula and Puget Sound Basin.