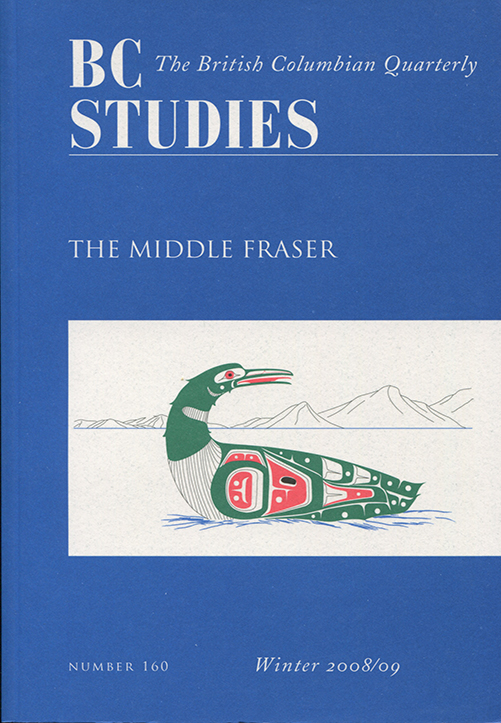 OUT OF STOCK Guest edited by Cole Harris, this issue focuses on land and livelihoods along the middle reaches of the Fraser River, British Columbia’s most defining river, which Simon Fraser descended in 1808 and miners converged upon fifty years later. The first article describes the large pit-house villages that flourished on terraces along the middle Fraser a thousand and more years ago, and evaluates current interpretations of them. The second describes, maps, and interprets the many remains of placer mining along this same stretch of the river. The third deals with ranching on the grasslands along the river, and particularly with the ranchers’ response to two pests: grasshoppers and wild horses. A final article assesses current land use options for the grasslands in relation to the often-conflicting agendas of ranchers, environmentalists, and First Nations. Overall, the issue commemorates a place rather than the events that opened it to the outside world.

The Grasslands Debates: Conservationists, Ranchers, First Nations, and the Landscape of the Middle Fraser

Late Prehistoric Settlement Patterns and Population Dynamics along the Mid-Fraser

Being and Place among the Tlingit

Exalted Subjects: Studies in the Making of Race and Nation in Canada

Buckaroos and Mud Pups: The Early Days of Ranching in British Columbia

Citizen Docker: Making a New Deal on the Vancouver Waterfront 1919-1939

Free Spirit: Stories of You, Me and BC

The Trail of 1858: British Columbia’s Gold Rush Past

The Importance of Being Monogamous: Marriage and Nation Building in Western Canada to 1915

The Origin of the Wolf Ritual: The Whaling Indians, West Coast Legends and Stories

Extraordinary Anthropology: Transformations in the Field

Cole Harris is an emeritus professor of geography at UBC and the author of many books and articles on early Canada, among them The Reluctant Land: Society, Space, and Environment in Canada Before Confederation (2008) and Making Native Space: Colonialism, Resistance, and Reserves in British Columbia(2002), both published by UBC Press.

Ryan Dickie completed his Bachelor of Arts in Archaeology at Simon Fraser University in 2007 and is currently engaged in graduate studies at SFU. His research interests include Interior Plateau archaeology, lithic technology, landscape use, settlement-subsistence organization, and the development of social complexity.

Jamie Hoskins is currently completing undergraduate studies in anthropology and archaeology at Simon Fraser University with a focus on First Nations governance and policy in British Columbia. When not studying, Jamie is employed as a vocational counselor with Chilliwack Community Services where he provides advocacy and support to marginalized, socially isolated, and multi-barriered members of the community.

Michael Kennedy is a retired geography teacher living actively on a ridge south of Lillooet in the middle canyons of the Fraser River. He is the fifth generation of his family to live out their lives there in intimacy with these dramatic landscapes.

Jesse Morin received his BA from SFU Archaeology in 2002, his MA from UBC Anthropology in 2006, and is currently a PhD candidate in Anthropology at UBC. His research focuses on the prehistory of the Pacific Northwest, most particularly on stone tools. The topic of his dissertation is the production, use, and exchange of jade artifacts in the pre-contact Pacific Northwest. He has published recent articles in the Canadian Journal of Archaeology and The Midden, and has recently returned from studying use-wear analysis on stone tools at the Russian Academy of Science in St. Petersburg.

Joanna Reid is a PhD candidate in the UBC Department of Geography with a long-term interest in environmental politics in British Columbia. Her PhD research focuses on the social conflicts over grasslands in the Cariboo-Chilcotin. Specifically, she is studying unique intersections of ranching, conservation, and Aboriginal title in the Middle Fraser, a spectacular grassland landscape along the Fraser River between Lillooet and near Williams Lake.

Takashi Sakaguchi completed a PhD at the Kokugakuin University. His research has focused on Japanese and British Columbia archaeologies, particularly preshistoric hunter-gatherer studies. His recent publications include the “Refuse Patterning and Behavioral Analysis in a Pinniped Hunting Camp in the Late Jomon Period” published in the Journal of Anthropological Archaeology 26 (1).

John Thistle is a PhD candidate in the Department of Geography at the University of British Columbia. His dissertation examines the environmental history of pest control in British Columbia grasslands.