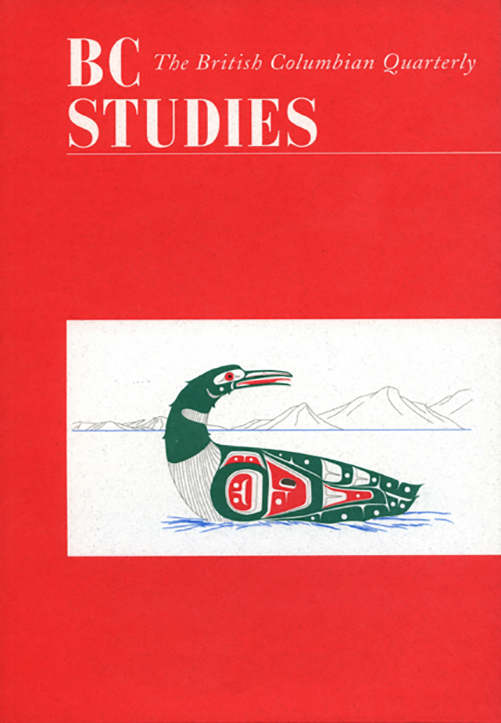 “They Made Themselves our Guests”: Power Relationships in the Interior Plateau Region of the Cordillera in the Fur Trade Era

Canada’s Struggle with Illegal Entry on Its West Coast: The Case of Fred Yoshy and Japanese Migrants before the Second World War

An Exercise in Futility? Regionalism, State Funding, and Ideology as Obstacles to the Formation of a National Social Movement Organization in Canada

Healing in the Wilderness: A History of the United Church Mission Hospitals

In Healing in the Wilderness Bob Burrows recounts the origins and evolution of the medical missions established and maintained by the United Church and its antecedents in isolated communities across Canada. An ordained United Church...

One River, Two Cultures: A History of the Bella Coola Valley

WATARA-DORI (Birds of Passage) is a biographical fiction of a half-year period (24 June 1915 to 1 January 1916) in the life of a Japanese-Canadian fisher. Mitsuo Yesaki has a thorough knowledge of the Pacific coast fisheries,...

An early and still not inappropriate epithet for Vancouver is Terminal City. This epithet denotes not only a peripheral cultural as well as a geographical location but also the city’s potential for development, despite its...

A welcome addition to the literature on Aboriginal symbolic politics and direct action in Canada, this book describes the standoff between the rcmp and a handful of Native activists and supporters at Gustafsen Lake, British...

Songhees Pictorial: A History of the Songhees People as Seen by Outsiders, 1790-1912

This is a wonderful addition to the history of Aboriginal peoples in British Columbia and Canada. It is unusual because it takes images as the starting point and valuable because the people upon whom it...

In the Shadow of Evil

Beatrice Culleton Mosionier is well known and highly respected for her first novel, In Search of April Raintree (1983), which received serious critical attention and has been widely taught at the university level. A toned-down...

In this interesting book, Michael Dawson studies the rise of a tourist economy in British Columbia over the course of the twentieth century. At the heart of the story are loosely related groups of tourist...

This book represents an expanded form of the much debated revelations of Samuel Bawlf concerning the Pacific Ocean explorations of Francis Drake during his 1577–80 voyage of circumnavigation. Parts of the voyage account are well known,...

Bill Reid: The Making of an Indian

A Stain upon the Sea: West Coast Salmon Farming

This collection explores many of the controversial issues surrounding fish farming practices in British Columbia. In five separate essays, the authors illustrate the importance of the precautionary principle in experimenting with new chemicals and processes...

This is a rich, edited volume on the anthropology of the North Pacific. It was produced following a 1997 conference held in New York at the American Museum of Natural History (amnh), which celebrated the centenary...

BC Studies no. 146 Summer 2005 | Bibliography of British Columbia

Duane Thomson is Professor Emeritus, Department of History, Okanagan University College. His research area is with Indian-European relations in the interior of BC. He was a principal in the Living Landscapes project, a Royal BC Museum sponsored website devoted to presenting the natural and human history of the southern interior. For this project he published a Hudson’s Bay Company journal, archival records databases, and various census projects. He has published in BC Studies on Okanagan Indian adaptation to European incursion. His most recent research has been on preparing the Norman Lerman ethnology of Okanagan Indians for publication and conducting contract work on the mixed-ancestry population of north central BC for the Ministry of Justice.

Marianne Ignace, PhD, is Associate Professor of Anthropology and First Nations Studies at Simon Fraser University, and an affiliated faculty member of the SFU Department of Linguistics. She coordinates and teaches in the university’s Aboriginal program in Kamloops. Her publications include a monograph on Haida social and symbolic discourse, The Curtain Within, and other works on Haida culture and language, an article on Secwepemc (Shuswap) culture in Vol. 12 (The Plateau) of the Handbook of North American Indians, and numerous other publications on Plateau and Secwepemc culture and history, as well as applied works on Aboriginal languages in British Columbia.

Dominique Clément received his Bachelor of Arts (honours) from Queen=s University in 1998 and his Master of Arts (history) at the University of British Columbia in 2000. He is on the cusp of completing his doctoral program in the Department of History at Memorial University of Newfoundland and is currently an instructor at the University of British Columbia. Fields of study include Canadian and Australian labour and constitutional history, social movements and Canadian legal history. His doctoral dissertation, entitled Rights in the Age of Protest: A History of the Canadian Civil Liberties and Human Rights Movement, 1962-1982, deals with the impact of the modern rights paradigm and rise of middle class reformist social movement organizations in the 1960s as a counterpoint to more radical transformative movements. He is currently a visiting scholar at the Centre for American and Canadian Studies at University of Birmingham in the United Kingdom.