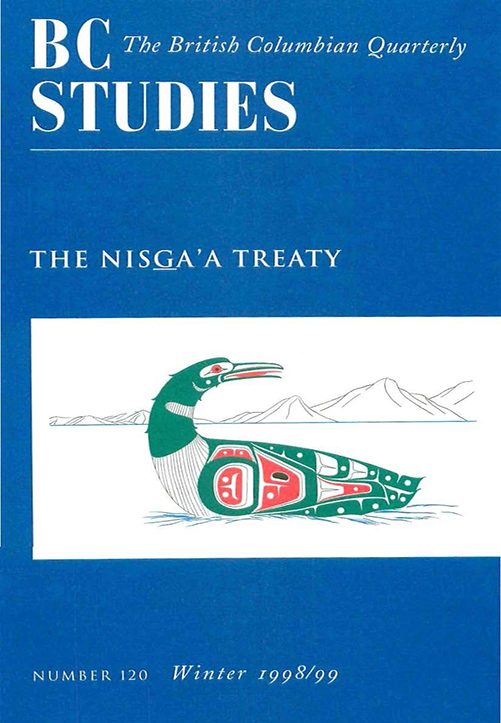 Beginning with Chief Joseph Gosnell’s speech to the provincial legislature (expressing in powerful rhetoric the treaty’s meaning for the Nisga’a), this issue features articles from both treaty supporters and its critics, exploring the background of the Nisga’a treaty and its consequences for all British Columbians.

Re-living the present: Title, treaties, and the trickster in British Columbia

Comments on the draft Nisga’a Treaty

Aboriginal self-government and the foundations of Canadian nationhood

On the Nisga’a Treaty

Honouring the Queen’s flag: A legal and historical perspective on the Nisga’a Treaty

John Borrows teaches constitutional law, Aboriginal law, and natural resources in the Faculty of Law at the University of Toronto.

Hamar Foster, professor and associate dean of law at the University of Victoria, writes on Aboriginal law, BC legal history, and comparative Canadian and US criminal law.

Joseph Gosnell is president of the Nisga’a Tribal Council.

Samuel V. LaSelva is a member of the Department of Political Science, University of British Columbia. His publications include The MoraI Foundations of Canadian Federalism (McGill-Queen’s University Press, I996).

Neil Sterritt was research director for the Gitksan-Wet’suwet’en Tribal Council, 1977/81, and the tribal council president, 1981/87. He led the Gitksan-Wet’suwet’en peoples in the precedent-setting Delgamuukw case, decided in December 1997 by the Supreme Court of Canada. He is co-author of Tribal Bounadries in the Nass Watershed (UBC Press, I998).

Charles Taylor is a professor emeritus of philosophy and political science at McGill University. His books include the Malaise of Modernity (Anansi, 1991, based on the CBC Massey Lectures), Multiculturalism: Examining the Politics of Recognition (Princeton University Press, 1994), and Philosophical Arguments (Harvard University Press, 1995).