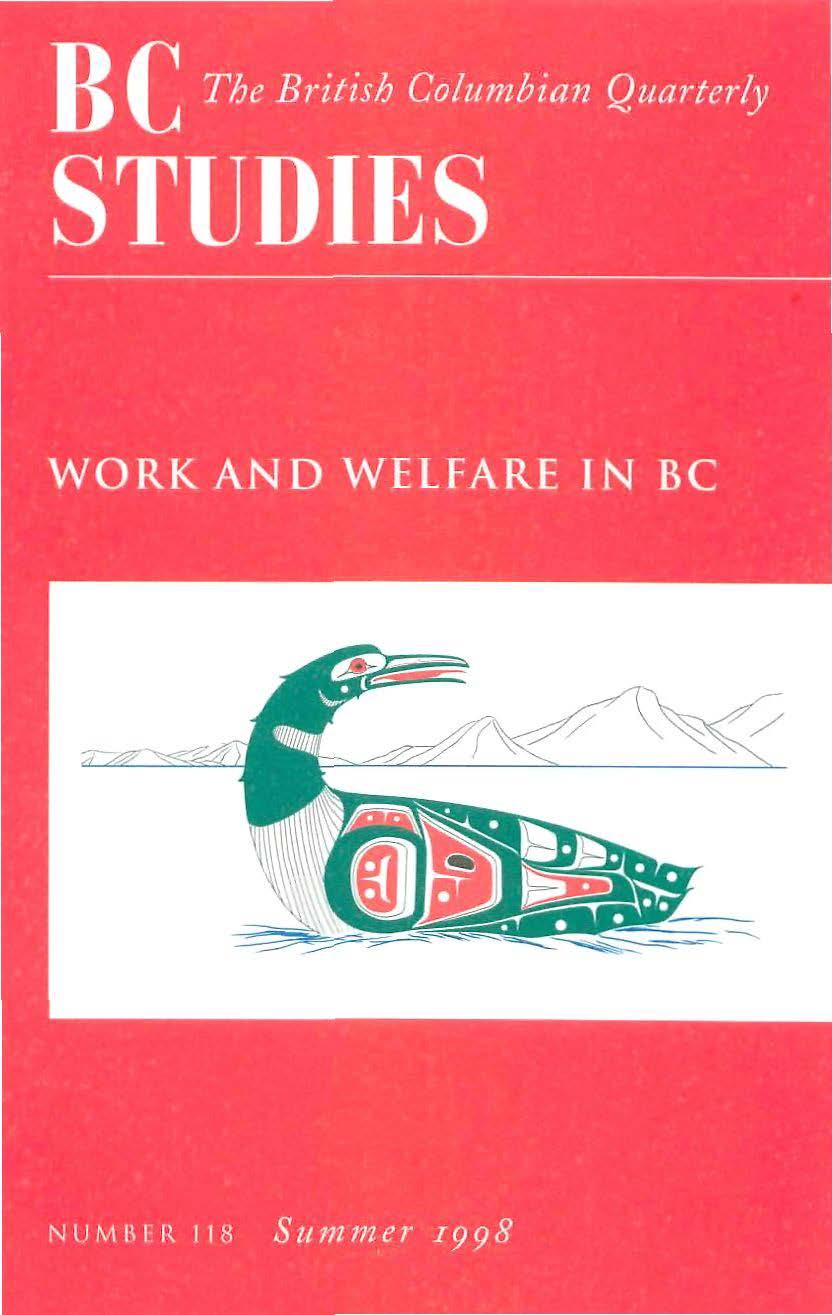 Work and Welfare in BC includes articles by Lynne Bowen and Megan Davies, as well as book reviews, an audio article, and a forum.

Female in a Forest Town: The Marginalization of Women in Port Alberni’s Economy

Friendly Societies in Nanaimo: The British Tradition of Self-Help in a Canadian Coal-Mining Community

Old age in British Columbia: The Case of the “Lonesome Prospector”

Seeing the Ocean Through the Trees: A Conservation-Based Development Strategy for Clayoquot Sound

The Cambridge History of the Native Peoples of the Americas Vol. 1: North America, parts 1 and 2

Old age in British Columbia: The Case of the “Lonesome Prospector”

BC Studies no. 118 Summer 1998 | Bibliography of British Columbia

Andrew Armitage is the Director of the School of Social Work at the University of Victoria. Major publications include Social Welfare in Canada (1996), Comparing the Policy of Aboriginal Assimilation (1995). Dr. Armitage worked for ten years as Assistant Deputy Minister and as Superintendent of Family and Child Welfare in British Columbia.

Lynne Bowen, a former public health nurse, is the author of four books of history for a general audience: Boss Whistle: The Coal Miners of Vancouver Island Remember (1982); Three Dollar Dreams (1987); Muddling Through: The Remarkable Story of the Barr Colonists (1992); Those Lake People: Stoires of Cowichan Lake (1995). She is the Maclean Hunter Co-Chair of Creative Non-Fiction Writing at the University of British Columbia.

Megan Davies is a research associate at the Wellcome Unit for the History of Medicine at the University of Glasgow. Her research interests include the history of old age, public health and the welfare state, and women¹s history.

Brian Egan is a researcher and writer living in Victoria. His work focuses on the social and political aspects of natural resource management, particularly forestry in British Columbia.

Susanne Klausen is a doctoral candidate in the Department of History at Queen¹s University (Kingston, Ontario). Her research focuses on gender and labour history. Her current work is on the history of the birth control movement in South Africa.

Kelly A. MacDonald, BA, LLB, and LLM candidate (Aboriginal Child Welfare), is of Tsimshian, Haida, and Scottish heritage. She is legal advisor to the First Nations Summit Child Welfare Committee and counsel for some First Nations child and family serving agencies. Ms. MacDonald is a former member of the Child and Family Review Board and currently sits as a member of the Children¹s Commission Multi-Disciplinary Team, which reviews child fatalities.

Richard Sullivan is an associate professor in the School of Social Work at the University of British Columbia. His areas of research include social policies and the developmental experience of families and children, social services evaluation and jurisdiction, and issues in First Nations child welfare.