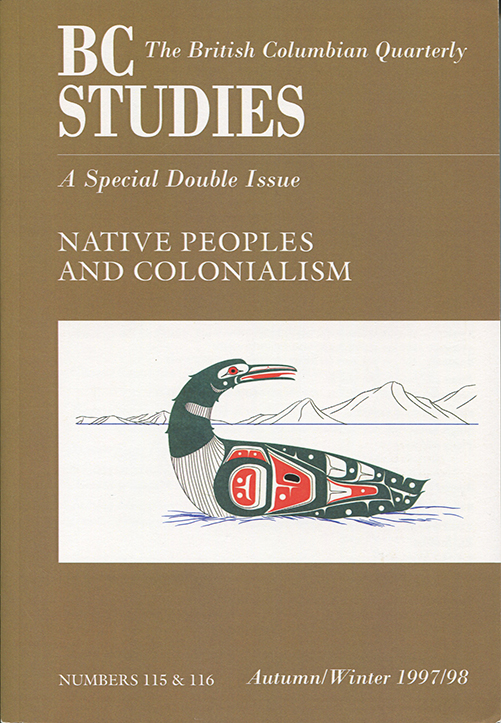 Tracing the Fortunes of Five Founding Families of Victoria

Revenge of the Pebble Town People: A Raid on the Tlingit

Pioneers, Progress, and the Myth of the Frontier: The Landscape of Public History in Rural British Columbia

LYNNE BELL is an associate professor and head of the Department of Art and Art History at the University of Saskatchewan.

KENNETH BREALEY is a doctoral student in the Department of Geography at the University of British Columbia.

JO-ANNE FISKE is an anthropologist and associate professor in Women’s Studies and Gender Studies at the University of Northern British Columbia. She has just completed a three year study on the Lake Babine legal order, C’iz dideen khat, When the Plumes Rise: The Way of the Lake Babine Nation (forthcoming).

ROBERT GALOIS is an adjunct professor in the Department of Geography at the University of British Columbia and author of Kwakwda’wakw Settlement, 1775-1920: A Geographical Analysis and Gazetteer (1994). He is currently preparing an annotated edition of Volume1of Clahs Diaries for the Mercury Series of the Museum of Civilization.

CHARLES LILLARD completed his reconstruction of the “Revenge of the Pebble Town People” with commentary for BC Studies shortly before his death in March 1997. He wrote that “stories such as this makes us want to weep: imagine what the Haida — and history — have lost. What a literature is gone.” Charles Lillard was widely respected for his evocative West Coast poetry, historical writing, fiction, and journalism.

SYLVIA VAN KIRK teaches Canadian History and Women’s Studies at the University of Toronto, where she is currently associate chair of the Department of History. She is author of the influential “Many Tender Ties”: Women in Fur Trade Society in Western Canada, 1670-1870(1980).

CAROL WILLIAMS is a doctoral candidate in American and Women’s History at Rutgers University in New Jersey.