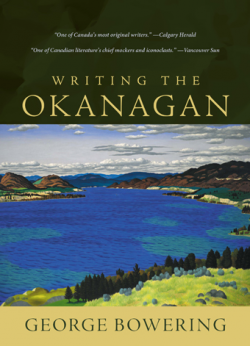 George Bowering’s new anthology, Writing the Okanagan, is a collection of Bowering’s fiction associated through setting, choice of characters, or autobiographical referents, with the Okanagan, chiefly the South Okanagan, where he grew up. Many of the pieces, poetry, short stories, and excerpts from longer works use the town of Oliver, where Bowering’s father taught high school chemistry, as a backdrop.

Some of the sharply-framed pieces draw on Bowering’s own experiences of life in a small farming town; they include baseball games viewed from the rickety press booth on top of the bleachers, where the teenage Bowering worked as a sports reporter, the rites de passage of youth, summer jobs on orchards and in the local packing house, and a story about a self-conscious young man returning to his home town for a class reunion. Bowering is particularly good at evoking, without indulging in nostalgia, an adolescent’s identification with the local landscape, in this case the dry, sagebrush covered hills surrounding the town, a place that offered escape from the stifling routines of small-town life, and room for contemplation and solitude to a creative and ambitious high school student.

As a writer of fiction, Bowering has the freedom to mischievously insert invented characters in the local setting. I enjoyed finding a thinly disguised D.H. Lawrence preparing to meet a rattlesnake, a very well-read vigilante heroine passing the night at the mining town of Fairview, and a talented female disciple of W.H. Auden writing poetry on the sly in an unobtrusive cottage tucked away in a peach orchard.

The compact space of an anthology can cause problems, particularly for poetry. “Desert Elm,” a longer poem about Bowering’s father, suffers from the omission of several verses. However, even in an excerpted prose piece, like the fragment reprinted from Cars, Bowering’s terse style is funny and satisfying, sufficient in itself: “…my buddy Willy would say to a girl from Osoyoos, maybe, want to go for a spin in my snappy red convertible, and what he had was a 1954 Morris Minor with the top sawed off” (250).

Oliver has a strong cultural connection with the Okanagan First Nations, and the anthology contains several articles and poems that touch on First Nations in the Okanagan Valley. It includes a short sketch from his novel Shoot! that contains a fictionalized portrayal of a First Nations man whom Bowering calls “Windy Bone.” The portrayal succinctly hits the mark: “Windy has a sense of humour that tells you that you had better be content to be a white man surrounded by irony” (246).

Particularly moving is Bowering’s essay on Mourning Dove, born Christine Quintasket in Idaho in 1885, one of the earliest North American First Nations women to write a novel. Before writing the piece, Bowering visited her grave in Okanogan, Washington. He outlines her struggles to be a writer and her close ties with her First Nations family north of the border, which included both of her grandfathers and one of her grandmothers. Mourning Dove herself taught at what Bowering calls “the Indian school” north of Osoyoos in 1917.

Throughout the book, Bowering’s lyrical sense of place shines through, both in descriptive passages and in evocations of local people. As he says himself, “You don’t cast aside your boyhood locus; it remains as part of the breath and sound trying to make what you are trying to make. Trying even now, forty-nine years on.” (37).