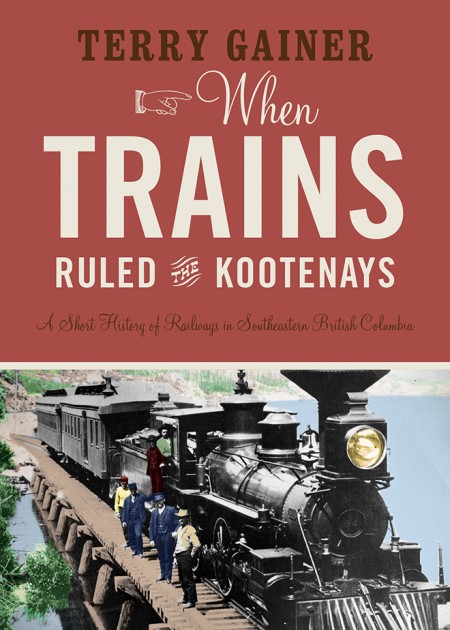 When Trains Ruled the Kootenays: A Short History of Railways in Southeastern British Columbia

Driven in part by what the author claims has been “a lifelong love affair with trains”, this book seeks to fill a gap in the history of rail development in the Kootenay region by adding the perspective of the people involved to the historical record. In doing so, Terry Gainer has certainly made a valuable contribution to the existing historical literature on this topic. When Trains Ruled The Kootenays is written in a lively and accessible style that will appeal to a wide variety of readers. Further, the addition of dozens of interesting and relevant images adds a welcome visual element to the work.

Local history enthusiasts and students will appreciate Gainer’s keen understanding of the historical importance of railway construction beyond the early years – for instance, his discussion of the highly influential CPR purchase of the Columbia and Western charter from Augustus Heinze which resulted in not only further CPR control of transportation in the region, but also gave the company ownership over the Trail smelter, positioning them for economic dominance in the region well beyond the golden age of the railways. By adding such rich detail to the existing historical record of rail development, Gainer has successfully written a book that is a valuable addition to local history. Through increasing our understanding of this part of the history of the West Kootenays he has also very effectively illustrated just how much things have changed over the past century and makes some important statements about what we might learn from the past with passages like this one: “One hundred years ago, you could travel on scheduled service from any point in the Kootenays to another. While today’s highways do access most communities, try doing it without a car. Public transportation today is virtually nonexistent.” For many reasons, When Trains Ruled the Kootenays is a must read for anyone interested in the history of railways and the West Kootenay region.

One potential criticism of the book can be tied to the author’s own words. On page 55, Gainer mentions the 2010 restoration of the historic CPR train station in Nelson, he writes: “…the restoration, while an outstanding accomplishment, offers scant information chronicling the principal role the station had played in the community and even less evidence regarding the sophisticated passenger train and steamboat connections that once served all of the Kootenays.” While this book certainly fills the gap in knowledge regarding transportation connections and their importance, more is needed on the “community” element he mentions. In the end, the book is an enjoyable read and a valuable contribution to the existing body of work on railway development in the Kootenays but still leaves more work to be done. It has effectively outlined the complex development of railways in the region and the major players involved, but hopefully others will continue to dig deeper for an increased exploration of the communities who relied on these railways and perhaps even more importantly, those who rode the rails and what their experiences were.