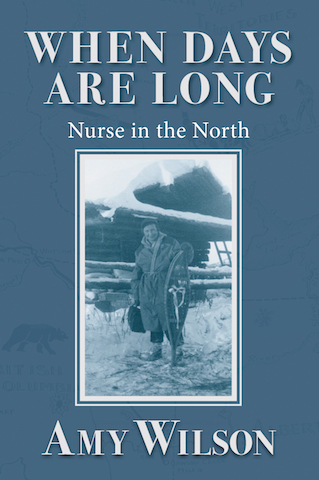 When Days Are Long: Nurse in the North

In this book, first published upon her retirement in 1965, Amy Wilson presents a biographical history of her career as a public health nurse in Northern British Columbia and the Yukon during the 1950s and 1960s. Upon completion of her nursing education in Calgary around 1930, Wilson went to work at remote Northern communities, initially in northern Alberta. In 1949, she started her public health work along the Alaska Highway in BC and the Yukon. Drawing from notes kept during her career, Wilson provides a vivid account of her experiences as a public health nurse. She wrote the book with a view to draw public attention to the lives and circumstances of the remote Indigenous communities she regularly traveled to treat people’s illnesses and to prevent contagious diseases, such as diphtheria and tuberculosis. She also conveys how she went out to help women in childbirth, and to provide vaccinations or treat injuries. Her stories are interspersed with accounts of the everyday lives of the Indigenous people with whom she interacted and the connection she built with the communities and local leaders. She also describes their health care and occasionally comments on the use of traditional medicine. Her story clearly communicates her commitment to provide care to Indigenous communities in mutual respect, to her responsibility as a nurse to alleviate sickness and promote health, and to do so in a remote area of the country she increasingly learned to love. The book relates an essential part of BC’s health history.

In several chronological and thematic chapters, Wilson provides a nuanced and vivid story of her work and experiences, starting with an account of a diphtheria epidemic during which she brought medicine to the people mostly by dog sled. In a next chapter, she reflects on her upbringing, her nursing career and her commitment to the Northern people. In the subsequent chapters, she talks about the challenging travel conditions, her interactions with Indigenous and white people at settlements and trade posts scattered along the Alaska Highway and their health and ways of living. She responded to remote health emergencies, organized vaccination programs and X-ray surveys and engaged with Indigenous families. She worked in close collaboration with the local communities and organized her travel with help from RCMP, bush pilots, local traders, and occasionally with officers of Indian Affairs. She also collaborated with nurses and physicians from outposts or the community hospital in the city of Whitehorse. The book conveys how she was deeply committed to understand the daily lives of Indigenous peoples, and was well aware of the often difficult circumstances in which small communities sought to survive and adapt to the social, geographical and material challenges affecting them. Some intriguing photographs illustrate the geographical context of Wilson’s public health work.

In a new introduction, added to the 2019 re-publication of the 1965 book, Amy Wilson’s great-niece Laurel Deedrick-Mayne provides further context to her great-aunt’s intention to draw public attention to Indigenous peoples and their difficult circumstances. Her great-aunt also sought to convey people’s resiliency and the supportive communities they were able to establish in the face of challenging social circumstances and living conditions. The book gives a vivid description of one nurse’s response to remote emergencies, deeply concerned and committed to bring people nursing care within the constraints and larger social circumstances over which she had only limited control. It is a timely historical account that shines light on public health nursing work in BC in the context of epidemics and the health and lives of Indigenous communities that is both historically and currently relevant.