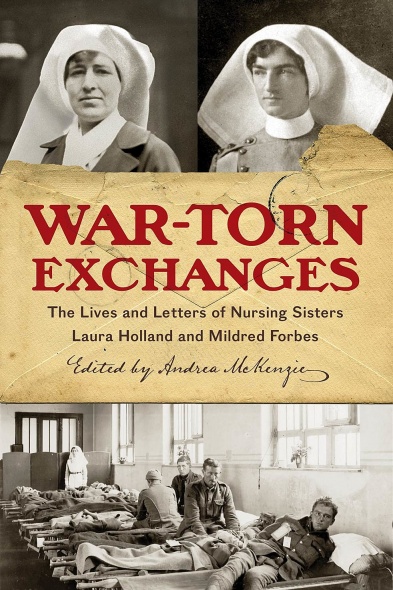 For four turbulent years (June 1915 to May 1919) Nursing Sisters Laura Holland and Mildred Forbes served together in the Canadian Army Medical Corps, taking on new administrative and bedside nursing roles in joint postings to England, Lemnos, Salonika, and France.

In this welcome volume, Andrea McKenzie compiles the surviving letters written home by Laura and Mildred throughout their service. Preserving the women’s military experiences as told through their own words, War-Torn Exchanges makes available a rich well of rare primary text comprising Canadian nurses’ narratives written during and over the course of the First World War from multiple locations and in diverse conditions. McKenzie, however, successfully approaches the compilation as a cohesive collection, offering close readings of the letters combined with careful reflection on the wartime contexts in which they were written and on the women’s formative civilian experiences and social positions.

Her keen analysis reveals that the women generally wrote from a professional perspective – that is, as military nurses describing their work – framed by their profound personal friendship. This discursive mode, McKenzie suggests, offers alternative representations of wartime conditions than are expressed in more commonly available military- and self-censored soldier-to-civilian correspondence, public media, fragmented wartime writing, or romanticized retrospectives. Significantly contributing, then, to extant war literature, McKenzie also adds to growing scholarship that lays bare the material realities of nursing work. In doing so, McKenzie highlights Laura’s and Mildred’s vivid portraits of improvised, messy, bodily work performed in intolerable conditions largely engendered through military mismanagement. She convincingly argues that these representations disrupt familiar conceptualizations of war as thoughtfully organized, soldiers as meaningfully sacrificed, and military nursing as the ministrations of angels. Yet beyond these more obvious considerations, McKenzie invites readers to explore how women’s friendships are also represented in the nurses’ rich descriptions by paying close attention to how and why they are sustained, strengthened, and exercised in a consuming professional context that emphasizes the very real trauma and horror of war.

In addition to their official nursing work, War-Torn Exchanges captures the women’s – and especially Laura’s – significant overseas experiences with and critiques of social disparity and health inequities. Laura offered visceral representations of the squalor and “poverty and filth” she encountered (121). Foreshadowing her post-war work, she commented of the “intelligent and bright looking [Romanian refugee] kiddies, one longs to take them away from this poverty & idleness & give them a start somewhere” (137). Not surprisingly, then, scholars of Canadian women’s and children’s health will undoubtedly recognize Laura Holland and Mildred Forbes as essential to the creation and implementation of federal public policy. Having trained with Mildred in social welfare after the war, and following her friend’s death, Laura became active in “transforming child welfare in British Columbia,” with her work “resonating throughout the twentieth century” (213) in Canada. Readers interested in the development of Canadian, and more specifically British Columbian, health policy now have the fortunate opportunity to explore War-Torn Exchanges for some of its most significant beginnings.

In recovering, preserving, and examining Laura’s and Mildred’s correspondence, with War-Torn Exchanges, Andrea McKenzie provides as indispensable a service to contemporary readers as the women no doubt did for their friends and family during the war. As Mildred exclaimed, in the absence of such accounts, “the people at home have no idea what the soldiers [and nurses, we might now add] … went through for them” (194).